Cultivating a disposition of joy is among the core teachings of Hasidism. This optimistic posture is described by the Hasidic masters as a matter of choice rather than circumstance. Joy, or simkhah, represents a conviction that the cosmos shimmers with God’s vitality and that this sacred life-force is present in all things — including obstacles. Sadness cuts our ties to the people around us, becoming a heavy stone upon our religious life. Joy, on the other hand, fosters connectivity and enables meaningful encounters with others.

Many Hasidic masters describe anger as a form of idolatry. Rage is an unforgivable indiscretion precisely because it threatens the fabric of one’s religious life, denying the presence of God in all experiences. Like the philosopher Martha Nussbaum’s argument that anger is essentially infantile, the Hasidic rabbis describe rage and vexation as childish hubris that forestalls the primary goal of one’s life: to work as an agent of compassion and kindness.

Hasidic traditions emphasize that nearly all hatred is baseless, pointless, and spurious because it is a projection onto others of our own failings. In the late 18th century, Rabbi Ze’ev Wolf, from Zhitomir, taught that such feelings prevent religious growth. When shrouded by a cloak of hatred, we tear down positive attributes through highlighting shortcomings, limiting our own potential. Baseless hatred both fractures human society and bars spiritual growth.

The Hasidic masters, though, do not call for passive acceptance. Rather, one must resist baseless hatred through offering kindness; one must subvert it by transforming it into something different. This brings us to the notion of uplifting “strange thoughts” (makhshavot zarot), a practice that played an important role in the legacy of Hasidism. The Ba’al Shem Tov, the founder of Hasidism, taught that all thoughts, emotions, and character traits include a sacred spark. Lust may be turned into gracious love — for God, and for others; pride may become dignity and self-respect; and baseless hatred may be remade into courageous resolve.

Makhshavot zarot present a unique opportunity. Rabbi Dov Ber Friedman, known as the great Maggid of Mezritsh who died in 1772, offered a parable to explain this dynamic. Strange thoughts come like a thief in the night, and there are only two possible responses. One is to throw on the lights, as it were, sounding the alarm and causing the burglar to flee. This may work for a time, but the robber will surely return at some point. So, the Maggid says, one should lie in wait and grasp ahold of the thief! Only then can we be sure he will not return. The same is true for wayward thoughts. They may be ousted and rejected, but sending away the “thief” is only a temporary fix. Therefore, one must seize and sublimate makhshavot zarot so they are recreated for a higher purpose.

Baseless hatred has a destructive power. Rabbi Abraham Joshua Heschel composed an evocative Yiddish poem, “On the Day of Hate,” in response to watching the Nazis burn books at the University of Berlin. Witnessing the corrosive power of hatred inspired his resolution to address the political, ethical, and spiritual issues of his day, including the movement for Soviet Jewry, the anti–Vietnam War movement, and the struggle for civil rights.

In a later essay called “Dissent,” Heschel identifies the following characteristics as necessary for the religious life: “deep caring, concern, untrammeled radical thinking informed by rich learning, a degree of audacity and courage, and the power of the word.”As an educator, I take Heschel’s demand quite seriously. We must combat baseless hatred and senseless division with radical expressions of love and courage, grasping the thief by the hand and fighting for the causes we believe in without empty or invidious rhetoric. In our political climate, we must honestly confront our own moral failings, considering the ways in which we have contributed to a culture in which language is debased and in which so many people have been dehumanized or marginalized. True dissent requires a careful dance in which conviction and humility are thoroughly imbricated. We must cultivate joyous courage rather than senseless anger, grasping ahold of injustice — inner and outer — and struggling to reshape it into something worthy of the divine presence. 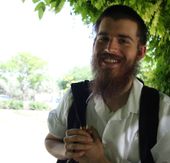 Ariel Evan Mayse is an assistant professor of religious studies at Stanford University, and serves as rabbi-in-residence of Atiq: Jewish Maker Institute.