Myths of beginnings and origination are intriguing, whether ancient or contemporary, fantastic or scientific. “In the beginning God created the heaven and the earth.” That’s the summary of the whole story, but what existed earlier? In the biblical story of Creation, we read of archaic or primordial elements that preceded God’s creation: “The earth was tohu vavohu and there was darkness on the face of the abyss.” Though it is not clear what tohu vavohu is — or, for that matter, what the abyss might be — it seems that tohu vavohu existed in a time before time. The term itself is generally translated as “formless and void,” or, alternately, as “chaos.”

Creative interpretations have been offered throughout generations of Jewish intellectual history to this mythic tohu vavohu. In what ways do these interpretations inform the way we understand our world and ourselves in it? Tohu vavohu could be understood as primordial matter. One very creative midrashic writer places a query in the mouth of a Hellenistic philosopher, who says to Rabban Gamliel (c. 80-120 CE): “Surely your God is a great painter, yet He had some very good materials for his creation, those being: tohu, vohu, tehom (darkness, spirit, and the abyss).” The philosopher’s statement is an imaginative staging of the dispute between certain strands of Greek philosophy, which stipulated that the world had always existed, and the Jewish view that God created the world ex nihilo, out of nothing.

In our midrash, Rabban Gamliel defends the Jewish view by saying: “May the spirit of this person [the philosopher] leave him, for tohu, vohu, and darkness are all created elements.” The uniqueness of Judaism, according to Rabban Gamliel, is in acknowledging the total nothingness out of which the one great God created everything. It is not that God won a battle over all other gods or that God defeated and destroyed realities existing prior to his creation, but rather that the Divine will turned nothingness into being without other mythic protagonists or elements.

Yet the question persists. What then is tohu vavohu? Is it chaos? Primordial undifferentiated matter? Is it nothingness, empty wasteland? Is tohu vavohu something to fear or is it a necessary state that precedes any creation? Could tohu vavohu have been understood as the primordial state of “water within water,” a state of fecund chaos that precedes creation, much as we find in ancient Near Eastern mythology? In this reading, chaos must be done away with in order to allow variegated, differentiated existence to come into being.

Medieval commentators differentiated between tohu and vohu. They understood the etymology of tohu as that which “bewilders, puzzles, disorients,” whereas vohu relates to something that exists — somethingness.

In this reading, we could see tohuvavohu as the primordial potentiality of all our consciousness. It can also be the dynamic that precedes fixed existence, where tohu is forever becoming vohu, nothingness becoming somethingness, which then melts back into nothingness endlessly.

In one of my favorite midrashim on tohu vavohu (Bereishit Rabbah 2:2), Earth, a personified protagonist in the story, who had existed until the great act of creating the cosmos as vast undifferentiated mass, finds herself in an existential state of shocked bewilderment (toha u’voha) when she is separated from parts of her essence that then become the firmament in God’s Creation. In her sorrow and confusion, Earth questions the justice of this separation, where Earth is the inferior domain of mortality, and the firmament enjoys celestial immortality.

Shlomo Ibn Gabirol (living in Andalusia, Spain, during the 11th century), in his majestic poem “Kingdom’s Crown” (Keter Malchut), pronounces God’s greatness as “The one who draws existence from nothingness,” with the words “[God] called to nothingness and it broke open to existence and it was founded.”

In the mystical literature of the Zohar and later in Lurianic Kabbalah, we find the worlds of tohu as the primordial divine creative sparks that blaze as grand fireworks before dissolving back into the ocean of undifferentiated divinity.

Reading into these traditions, I find an inspiring insight relevant to our contemporary world. The transition from unsustainable tohu to the firmly established world is only possible when we learn to celebrate difference and otherness, while also affirming complementary wholeness.

I feel there is great Jewish wisdom in understanding tohu vavohu as the draft works of God’s Creation. As the ground matter that allows the final work of Creation to come into being, they are like the initial drafts we write for the drawer — too raw, chaotic, or unripe, but perfect aborted efforts to create something from nothing. Judaism, then, teaches us to respect and love our in-progress and early works of art, thought, imagination, love.

In the endlessly pulsating dance between potential and manifestation, we need not fear tohu vavohu, inchoate chaos, the drafts of shimmering sparks that lead us to ever greater creativity. 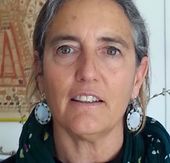 Melila Hellner-Eshed teaches Zohar and Jewish mysticism at the Hebrew University and is a senior fellow at the Shalom Hartman Institute in Jerusalem. She is also on faculty of the Institute for Jewish Spirituality.