The eighteenth-century scholar Moshe Chaim Luzzatto explains the classical Jewish notion of yetzer hatov (the inclination toward goodness) and the yetzer ha’ra (the inclination toward evil) succinctly in his book Derech Hashem (The Way of God). He affirms several key Jewish understandings of human beings. First, we are neither inherently good nor inherently evil (despite what other religious traditions or ideologies might posit); second, we operate by our own free will; and, finally, our very purpose — the reason for our existence — is to move closer toward perfection, that is, God (which, I would argue, can be taken literally or metaphorically, depending on the theology of the reader).

Luzzatto’s brilliant articulation cuts to the core of why I am a Jew. I believe I have power; I have agency. I exist to strive for the good. My life is meaningful because of the work I do to create a more just world — having control over my own evil inclinations, and, by extension, working to combat the consequences of others giving in to theirs.

While we can read Luzzatto’s vision as a universal theology, the talmudic rabbis give it a particularly Jewish expression, explaining that the Torah, the covenantal document between God and the children of Israel, explicates specific commandments, laws, and instructions to guide a Jew toward a life of goodness. Countless generations have interpreted the teachings of our tradition, learned from those who came before them, and applied them as a guide for contemporary life. Sad to say, too many Jews have failed to control their evil impulses — such as predatory sexual misconduct or unethical business practices — despite their adherence to Jewish observance.

The sages trace the “yetzer” to the very creation of the world in order to make the claim that free will is essential to human nature, as are both inclinations. For example, one of the most important commentaries on the subject grapples with how humans are “very good” even while they are capable of evil: In B__reishit Rabbah 9:7, we find this: “Nahman said in Rabbi Samuel’s name: ‘Behold, it was very good refers to the good desire; And behold, it was very good, to the evil desire. Can then the evil desire be very good? That would be extraordinary! But for the evil desire, however, no man would build a house, take a wife, and beget children.’”

This well-known text reminds us that the same passions animated by yetzer ha’ra (such as sexuality, ambition, appetite, and greed) can be also drivers for good — for productivity and even success when they are well channeled. It is not only normal to have evil impulses, but also essential to our humanity.

Rashi extends the point in his commentary on the biblical story about Cain murdering his brother Abel (an extreme example of the uncontrolled yetzer ha’ra). In Genesis 4:7, God says to Cain: “Isn’t it so that if you do good, you shall be forgiven? However, if you will not do good, it is because sin crouches at the entrance [of your heart], and to you shall be its longing, although you have the ability to subdue it.”

And Rashi comments: “And to you shall be its longing,” means the longing of sin — i.e., the evil inclination. This inclination constantly longs and lusts to cause us to stumble. “Although we have the ability to subdue it,” suggests that if we wish to overpower it, we will.

When I was a congregational rabbi, I counselled many seekers who were struggling with their evil inclinations. And as an advocate for social justice, I challenge the Jewish community and the American people to confront the consequences of people’s failure to control their impulses. Racism and bigotry endure because of our inclination to demonize the “other”; rape culture festers in the face of unbridled misogyny; economic gaps widen and the climate warms in relationship to greed and consumption. The presidential election has given unprecedented permission to those who either cannot, or choose not to, control their impulses. The spike in blatant antisemitic and racist incidents is a call to action for all of us. 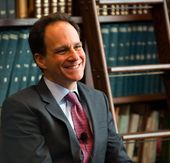 Rabbi Jonah Dov Pesner serves as the director of the Religious Action Center of Reform Judaism (rac.org). Pesner was named one of the most influential rabbis in America by Newsweek magazine. In 2011, he was elected senior vice president of the Union for Reform Judaism.