Menu
HomeThe Pull of our Inclinations: Steering away from the binary view of good and evil

How nice to write about a subject I know so well — and from experience, not just from books.

When it comes to Jewish traditional text, we first hear about the evil urge in Genesis 6:5: “God saw how much human evil there was on earth, that their thoughts were inclined only toward evil, all day long.” We learn that God sent the flood to destroy that evil behavior.

Right after the flood, the Torah speaks again about the yetzer, but this time, God says: “I will not again curse the land because of humans, since the human heart is inclined toward evil mi-ne’urav.” (Genesis 8:21) This last word is usually translated “from youth,” but I take it to mean “because of immaturity.” God, realizing that He can never again permit Himself such a great big burst of anger, determines to understand us humans better and treat us with more patience. He comes to recognize that we are ruled so much by our aggression, viciousness, greed, and moral indifference because we have refused to grow up.

Our rabbinic sages were unhappy with the Torah’s pessimism on this question. With no biblical basis, they invented a yetzer hatov, a “good inclination,” to give us an even chance. Yetzer hatov enters us at the age of bar or bat mitzvah. The mature human soul is a tabula rasa, the rabbis said, where the two urges fight it out. But God is on our side in that battle, and He gives us the Torah to help us in our struggle against that childish pull toward evil.

Later generations of commentators and liturgists were not satisfied with even that leveling of the playing field. “My Lord, the soul You placed within me is pure,” we read in the prayer book’s early morning service. But our tradition never quite clarified the relationship between the pure soul, the divine image, and the evil yetzer. Is the yetzer part of the soul or a challenge to it? The mystics, as early as the leading medieval scholar and kabbalist Nahmanides (1194–1270), claimed that when God blew the breath of life into Adam, an act repeated each time a baby is born, that breath comes from within God’s own self, a spark of divine light within each person. That is what makes for the sacredness of each human life. The spark is covered by qelipot, “shells,” which I understand to be walls of defensiveness and self-protectiveness brought about by fear and inner weakness. The battle against evil is then the soul’s struggle to break through those walls, to be strong and free enough to love and to live generously. This view of the human self veers away from the binary view of endless moral struggle; it depicts a true self that has the capacity to live a life that fulfills God’s purpose in creating it.

We see here a twin process, the maturation of the individual mapped onto the maturation of our tradition. As the God of Genesis learns to deal more patiently with His creatures, so do we learn to judge both ourselves and others more generously. If we do not grow in that way, we will simply destroy the world around us, as God did in the flood. We, along with God and with the tradition that nurtures us, must strive toward becoming more loving and more understanding of human frailty. The person, along with the tradition (personified by the God of Genesis), moves from seeing the self as evil to seeing both good and evil in the person, and thence to discovering the trace of divinity within each human being. In the course of this, we need to figure out when we have to stand up and fight against evil and when we can unmask it, disarming it by seeing the hidden sparks of soul-light that lie trapped within it, waiting for their redemption.

The Ba’al Shem Tov quoted the words of Pharaoh’s soldiers as they chased Israel into the sea: “Amar oyev erdof asig ahaleq shallal.” “The enemy said. ‘I’ll pursue them, catch them, plunder and divide their booty.’” (Exodus 15:9) Pharaoh uttered five wicked words. But each of them begins with the letter alef, which also stands for the number one. The Ba’al Shem Tov saw this as hinting at the cosmic silent alef, the presence of the One — even within the words of the wicked Pharaoh. This is the hidden oneness of God, found everywhere, even in what we think of as the most terrible parts of ourselves.

The yetzer ha’ra waits, even longs, to be unmasked. 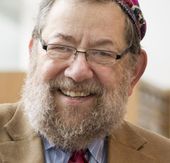 Rabbi Arthur Green is the Irving Brudnick Professor of Jewish Philosophy and Religion at Hebrew College, where he serves as rector of the Rabbinical School. His most recent book is Judaism’s Ten Best Ideas: A Brief Guide for Seekers (Jewish Lights).