Menu
HomeConsider and Converse: A Guide to Yovel 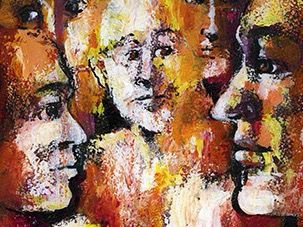 Sh’ma Now curates conversations on a single theme rooted in Jewish tradition and the contemporary moment. At the heart of this issue of Sh’ma Now is the theme of “Yovel” —“Jubilee.” The perspectives shared in these pages are meant to be expansive — to inspire reflections on Judaism and possibility in ways you may not have considered before. They aim to hold discord. We hope that the richness and diversity of these essays will show you new perspectives that are personally meaningful and edifying.

This guide offers a variety of suggestions, including activities and conversation prompts for individual contemplation and informal or more structured conversations. We suggest that you use this guide to share reflections and thoughts over a Shabbat meal, or, for those who are more adventurous, to lead a planned, structured conversation, inviting a small group of friends and family to your home or to a coffee shop. If you would like more information about ways in which this journal might be used, please contact Susan Berrin, Sh’ma Now editor-in-chief, at SBerrin@shma.com. You can also print out a PDF file of the entire issue.

Interpretive Questions can focus the reader on the ideas in the articles.

Yovel: A Sourcebook for Fifty Years, created by T’ruah, delves into the biblical concept of Yovel (Jubilee) as a means of opening up conversation about the complexities of the anniversary of 50 years since the Six-Day war. This guide looks at seven aspects of yovel, as well as texts about Jerusalem, as opportunities to grapple with both 50 years of sovereignty over the holiest sites of Judaism, and 50 years of military occupation over another people. Order your Yovel guide here.

The Center for Jewish Nonviolence engages in creative, nonviolent activism in the occupied Palestinian territories and Israel with the aim of bringing an end to the occupation. The summer of 2017 marks 50 years of occupation, and the organization is mobilizing Jewish activists to join Palestinians on the ground to resist segregation and discrimination.

SISO: Save Israel. Stop the Occupation has produced a Jubilee Haggadah, with contributions from 30 leading Israeli and Diaspora Jewish figures interpreting the traditional text in light of Israel’s occupation of the Palestinian people. Because liberty is not only for us, but for all human beings. From Amos Oz to Sarah Silverman, Achinoam Nini to Leon Wieseltier, from Anat Hoffman to Carol Gilligan, in this 50 year, we are proclaiming liberty throughout this land for all its inhabitants. The texts are rich, nuanced and diverse. The original artwork and design (by Michal Sahar, Israel’s leading graphic designer) make this a beautiful work that invites reflection and conversation.