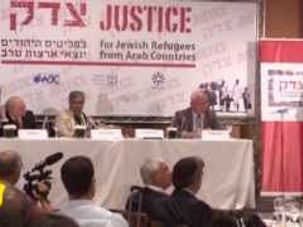 They’re often called the “forgotten refugees” — a group of more than 850000 Jews who were kicked out of the Arab world or fled from state-sponsored persecution after the State of Israel was founded… It’s what some historian’s call the Arab world’s “double war” on the Jewish state. one was fought on the battleground, the other at home against the nearly one million Jews who had lived for hundreds of years in Iran, Iraq, Egypt, Syria, Tunisai, Yemen, Morroco and Algeria. The plight of these Arab Jewish refugees never made world headlines for very long — that’s because nearly 70% of them went to Israel where they were integrated. But their expulsion from Arab countries was filled with abuse and violence — most left wealthy communities with no more than a suitcase in their hand. The Arab governments are estimated to have seized between what would be today the equivalent of $5-$10 billion dollars of assets from the Arab Jewish refugees. At this first ever conference called “Justice for Jewish Refugees from Arab countries,” the Israeli government and the World Jewish Congress are demanding recognition of the crimes committed and compensation… Prime Minister Netanyahu is championing the cause more than any of his predecessors…he recorded a message for the conference… Levana Zamir, who was born in Cairo, came to the conference to tell her harrowing story. She was 10 years old on May 16th, 1948, the day the state of Israel was declared. That evening, 10 Egyptian police … 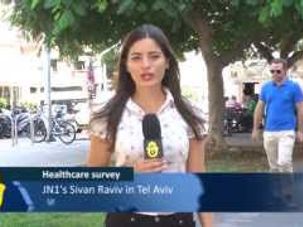 According to a recent Bloomberg survey of 145 countries, Israel ranked 6th in the quality of healthcare it offers its population along with their general health status. The report was based on information by the World Bank, the UN the World Health Organization, and studied life expectancy, mortality rate, and obesity levels among other factors. Singapore came in first, followed by Italy, Australia, Switzerland and Japan. And it appears in the survey that a country like Israel, which is constantly dealing with budget cuts due to large sums of money allocated to its defense and security, managed to surpass Western countries like the US, Canada, and such others. Even though Israelis ranked high on their overall health score, it is a recognized concern that Israel’s hospitals are crowded, and that there is a shortage of doctors and medical staff. However, in contrast to various developed countries, medical care in Israel is funded by the government for all citizens, regardless of their financial means. And life expectancy is one of the longest in the world. Sivan Raviv, JN1, Israel.