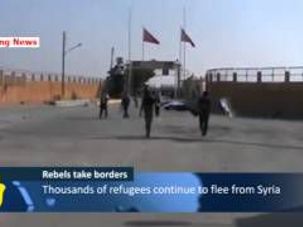 Syrian rebels captured a third border crossing with Turkey from President Bashar al-Assad’s forces on Sunday (July 22), rebel commanders and a Turkish official said. A Turkish official at the border confirmed that Bab al-Salam was in rebel hands. He said the Turkish side of the border gate - which normally operates mainly for commercial traffic from Turkey to the Syria city of Aleppo - remained open but there was no traffic. A rebel fighter at the border crossing claiming to represent Asefat al Shamal, meaning ‘Storm of the North’ confirmed the crossing had been captured on Sunday morning. “Our heroes in the Free Syrian army captured Bab al Salam border crossing on July 22, God is the greatest. Our heroes captured the border crossing after Assad’s gangs fleed,” he said. A senior Syrian army defector in Turkey said Bab al-Salam was taken at 8:45 am and Assad’s troops quickly fled. The rebel fighter at the crossing said that after defeating Assad’s forces there, the rebels’ plan was to head to Aleppo. “We liberated Bab al-Salam border crossing from Assad’s gangs after we surrounded them. They withdrew after we dealt them heavy losses. Here I stand, with my brother fighters in the Free Syrian Army, standing at the entrance of Bab al Salam. (Fighters chant: “God is great”) This building is what separates us from Turkey. God willing we will go to liberate Aleppo and after that will continue to Damascus to the presidential palace to get rid of the traitor there. God is the …