On Sunday, I saw a shocking segment on CNN about the earthquake in Haiti. First, the program recounted the story of a three-year-old girl who was critically injured in the earthquake and needed immediate surgery to survive. Later, the program reported about a minister in Haiti who preached to survivors that God sent the earthquake as punishment for their sins. The minister said the disaster was “God stomping his foot and shaking the ground.”

Mounting the buses and trucks near the Jimani border crossing, the young rescue workers from the Dominican Republic’s civil defense corps were excited, even cheerful. They’ve been preparing at their staging point for over a day and now, equipped with helmets, flashlights and face masks they are ready for action. 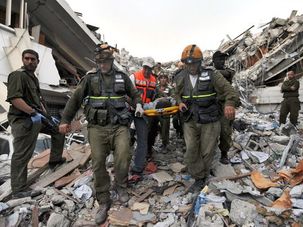 The crowd broke out in cheers as an ambulance pulled out of what was once Haiti’s main tax administration office, carrying a survivor rescued from the wreckage by an Israeli team four days after this city’s devastating earthquake. 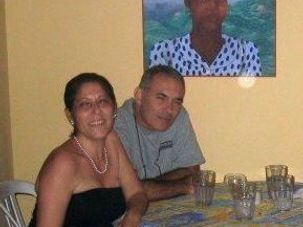 Each year on Yom Kippur, Rudolph Dana locks himself in his Pétionville, Haiti, home — protected by guard dogs and security personnel — and passes the Day of Atonement fasting, praying and reciting the traditional liturgy of repentance and forgiveness.

After the Earth Moved

For American Jews who give generously to charity, there is often an inner struggle: How much should they support other Jews, and how much should they give to causes in the wider world? The response to the tragedy befalling Haiti demonstrates the wisdom of turning that binary dilemma from an “either/or” question to a “both/and” affirmation.

The Grief, Misery and Moments of Joy at Israel's Haiti Hospital

The lines outside the Israeli field hospital were growing longer with earthquake victims pouring in, some seeking treatment for the first time since the January 12, simply because there was nowhere to go.

In Haiti, a Poignant Rescue Mission Amid 'We Love Israel' Cheers

Local rescue workers tried to get Franz Gilles out shortly after the massive, 7.0-magnitude earthquake hit the Haitian capital on January 13, but to no avail. They left their equipment on the ground and went on to rescue others. But three days later, an Israeli rescue mission, came back to the building, after receiving information that someone was still alive in the building.

Haiti, the island nation suffering terribly in the wake of the catastrophic January 12 earthquake, is home to a tiny Jewish remnant.