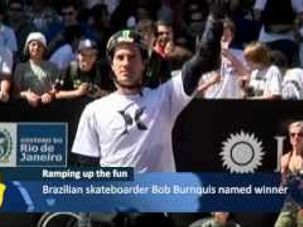 The MegaRamp skateboarding competition, which brings together the world’s best and most daring skateboarders and BMX riders, comes to Rio de Janeiro. The crowd, despite the intense heat, filled the stands to almost its full capacity. Brazilian skateboarder Bob Burnquis was hurt doing a move but went on to win the competition on Sunday, to the delight of home fans.

A session at "The Park of Melbourne" | ThatSkateCrewTV

Hurricane Isaac raining on us so we went to our local indoor skatepark for a session. Skaters featured: Shylo Tolliver, Ish Cepeda, Michael Wolfe, Dakota Hunt, Matt Call. Filmed and edited by Caleb Lavender. Song: One Day by Matisyahu