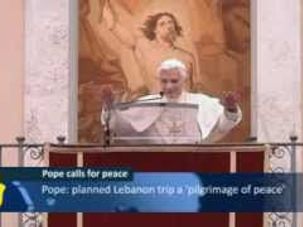 Pope Benedict has said in an address to pilgrims outside his summer residence in Italy that his upcoming trip to Lebanon should be seen as a “pilgrimage of peace”. He also urged the international community to step up reconciliation efforts in the region to end what he called the sufferings of people in the Middle East. The planned visit next week comes amid fears that fighting in neighbouring Syria will spill over into Lebanon, where tensions are already running high between Sunni and Shiite Muslim communities. Last month, violence broke out between opponents and supporters of the Syrian regime in Lebanon’s second largest city of Tripoli, leaving 17 people dead and over 100 wounded. During his three-day trip, the 85-year old pontiff plans to hold an open-air mass in Beirut and to attend getherings with Lebanese youth.