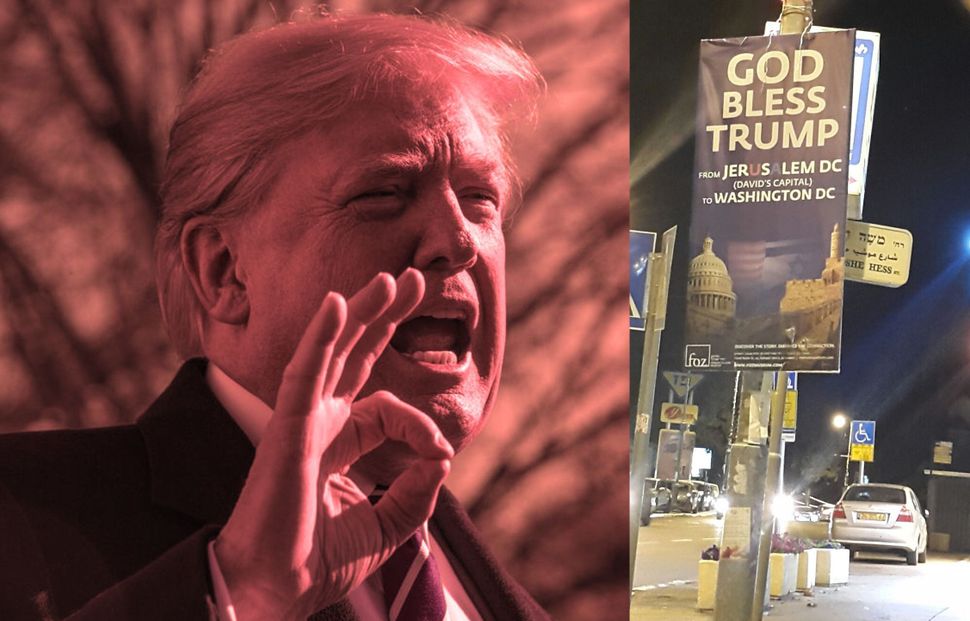 A year in to this reality, I still cannot believe that this man is the president. He is not only a compulsive liar, narcissist, and bully, he is also an admitted sexual assailant. Knowing that sixty million Americans so easily dismissed his behavior towards women in favor of whatever it is that they saw in him has made me extremely distrustful of my compatriots. When I meet people that voted for him or support him – and that incredibly includes people whom I consider friends – I am always uneasy and actually hurt that the sexual assault of women means so little to them, that so many other things were more important than women’s trauma. This remains very hard.

This new development, however, in which many coreligionists think he is the Messiah because he declared Jerusalem the capital, has added a new layer to my psychic angst. They actually think he is a gift from God. The pussy-grabber-in-chief has now been elevated in status among certain Jews because he has taken a unilateral decision about Jerusalem that sets him squarely on the side of the most right-wing members of the tribe, no matter what the implications of this decision may be.

We know that for many Jews, a politician’s worth is based entirely on his or her allegiance to right-wing ideas about Israel, which is why Trump received such a strong vote among Orthodox Jewish Americans. Only Israel matters. Still, when I witness the “Only Israel matters” approach to politics in the Trump context, I am reminded once again of how little women are valued in the Jewish community. So many of my coreligionists continue to throw women under the bus. Our needs as a woman are unimportant compared to the perceived needs of Israel.

Just to clarify, I am an American Jew who actually lives in Israel, whose children are serving in the army, whose taxes go to the state. I am actually doing the hard work of supporting Israel. And yet I cannot accept the idea of ignoring women’s needs in order to support Israel. Never.

Plus, it is worth pointing out that his move on Jerusalem is a one-sided bully-tactic that will not actually achieve anything or advance a healthier Israel. It may, however, incite war. And for me, as someone who has people who would be responsible for fighting such a war, that worries me more than what words are written on my passport.

This man’s declarations do not only throw women under the bus. They also ignore the real needs of the Palestinians, whose relationship to Jerusalem is also obviously significant here. In addition, in his rashness, he has also dismissed the ideas and wisdom of people who have dedicated their lives to advancing peace and diplomacy in the Middle East. As the New York Times reported this week, Trump is apparently surprised at the reaction he got to his declaration. He didn’t realize the Jerusalem issue was so hard. That actually happened.

The hardest part for me, though, is probably what is happening in the United Nations. Despite this outrageous declaration on Israel, UN Ambassador Nikki Haley has some important work to do there. Like Haley and so many other people, I would like to see the UN be less radically anti-Israel. But I don’t want that process to happen through Trump. I don’t want this unreliable, irreverent, self-interested diplomatic dunce to be the one who is defending Israel. No thank you. I don’t want to be hanging on this megalomaniacal tyrant for some justice for Israel. It feels so incredibly demoralizing and wrong to be dependent on someone like Trump and his toxic interactions – he strong-armed Canada into becoming almost an enemy, for heaven’s sake — for anything that I would consider worthwhile. I refuse to believe that he is capable of knowing right from wrong even when his administration lands in a policy position that I might agree with. I will not have his back. I will not celebrate or hang placards for him. I will just continue to wonder at the state of justice in the world.

This whole episode has raised some tortuous questions for me. Can good come out of a monster? This may have once been considered the Wagner question — as in, can we enjoy the music of a rabid anti-Semite? But as the extent of misogyny unravels in front of us, as Harvey Weinstein’s victims and proteges come out of the woodwork, I am realizing that this is more than the Wagner question. It is Wagner-Weinstein-Allen-Picasso-Jung-Spacey-Kennedy-Clinton-Cosby-Hoffman, etc etc question. Our entire culture is built on the artistic and political work of misogynistic, sexually abusive monsters like Trump. And yet life somehow goes on. It is heart-wrenching to live through this.

Nevertheless, even if I continue to watch Weinstein movies, I will never celebrate anything Trump does as a businessman or a politician. There is no art here. There is nothing grand or godly or worth celebrating in this man – not the way he got here, not his ideas, not his actions, and not his grandiose proclamations on Israel. In all that he remains a singular disaster for the human race, not a blessing from God, no matter what the placards say.