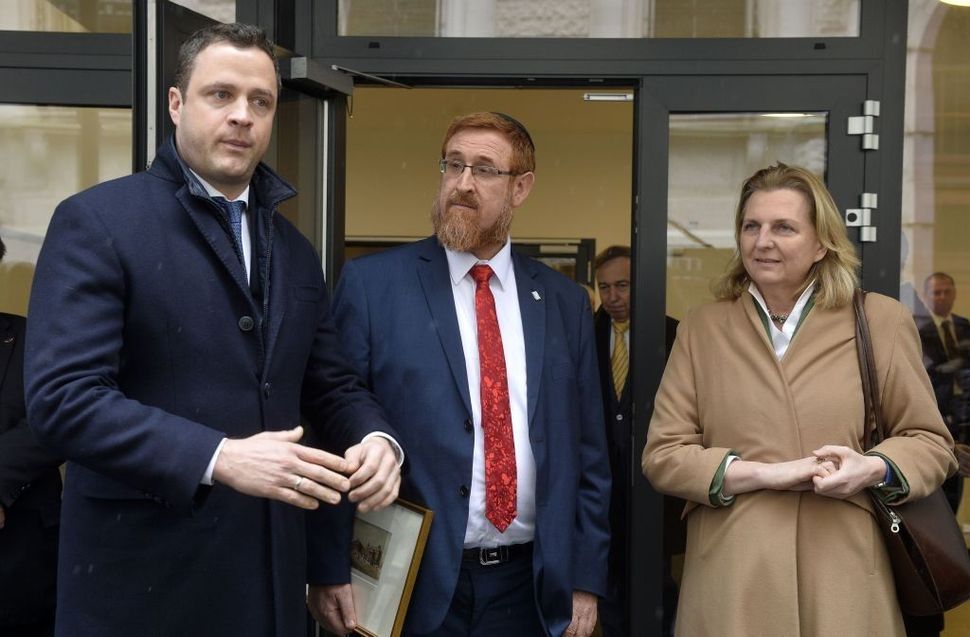 The Israeli government and the Knesset are formulating approaches to address the rise of the far-right Austrian Freedom Party and the new Polish law regarding the Holocaust. In this effort, there is a need to address the growing gap between official Israeli policy and the actions of Israeli right-wing politicians.

A recent Mitvim Institute study, written by former MK Nitzan Horowitz, found that Israel’s Ministry of Foreign Affairs, President Rivlin, his predecessor, President Peres, and the former Knesset Speaker all refused to meet members of extreme European right-wing parties and called on all Israeli parties to refrain from such meetings. However, the study found that certain Likud members, including incumbent MKs and key figures in the settlement movement, did not heed this advice and instead held meetings with far-right officials from Austria and other European countries. In these meetings, they did not address the anti-Semitic roots of these parties, but rather sought to develop partnerships, and expressed support and appreciation for what they perceive as these parties’ friendship to Israel.

Far right-wing European actors boast of these ties with Israel at home. By meeting with them, Israel provides them the public legitimacy they need in the face of accusations of anti-Semitism. For the right-wingers in Israel, on the other hand, such ties serve to support the settlements and Israel’s position regarding the status of Jerusalem. Furthermore, the relationship between the two sides is very often based on shared hostility toward Arabs and Muslims.

This gap between Israel’s official policy and the actions of right-wing politicians must be narrowed. Far right-wing parties are gaining influence in certain countries in Europe. In Austria, such a party has recently even joined the coalition and some of its members are now appointed senior officials. It is possible that in the next elections to the European Parliament in 2019, the representatives of such parties will also become significant in EU institutions. In light of this, the MFA should formulate criteria and guidelines to instruct Israeli right-wing parties on how to conduct themselves vis-à-vis the far right in Europe. A recommendation to refrain from any interaction with the ministers of the Freedom Party was already formulated and accepted by the Prime Minister.

The aim of such a measure would be to prevent right-wing MKs from granting legitimacy to far right-wing ideology in Europe, contrary to the position of the MFA. Furthermore, it would also prevent the legitimizing of anti-Semitic elements in Europe by Israeli officials, regardless of the fact that such elements may currently focus on hating Muslims rather than Jews. The formulation of such criteria and guidelines should be led by the MFA, but should also involve other partners, including the Knesset’s Foreign Affairs and Defense Committee, the Knesset Speaker, the Jewish Agency, the Union of Local Authorities, and MKs who head parliamentary friendship associations with relevant countries (such as the Israel-Austria Friendship Association headed by MK Amir Peretz). Additionally, it is vitally important that the recommendations formulated become public, in order to identify those who do not comply with the guidelines, and to ignite a public debate on the issue.

However, the purpose of diplomacy — both formal and parliamentary — is not to impose boycotts, but rather to promote interests through dialogue. Therefore, it is important for Israel to formulate a list of demands and conditions for far right-wing parties in Europe as a condition for policy change toward them. Such a list will also have to take into account the needs of the Jewish communities in Europe, and can be consolidated in cooperation with other groups in Europe who oppose far right-wing parties. It does not need to focus on one country or another, but must address the growing phenomenon throughout the continent, while including lessons from change processes that parties and institutions underwent in the past.

European far right-wing parties sometimes pretend to be pro-Israeli in order to develop ties with right-wing groups in Israel and receive a certificate of integrity from them. This was the case, for example, with the interactions between the head of the Austrian Freedom Party and members of Likud. The leaders of these parties sometime carry soft messages and talk of change, but do not back up this discourse with actions. Presenting a list of clear Israeli requirements and conditions — including, for example, ousting those who are infecting the party with anti-Semitism, changing ideological frameworks and documents, and demonstrating commitment to legislation and policy denouncing anti-Semitism — will produce concrete measures to examine the actual conduct of these parties and avoid a façade of moderation.

The rise of the far right-wing and populist elements is taking place simultaneously, albeit at different levels, in a number of EU member states — especially in the central and eastern Europe. In the EU, there are now countries led by governments that move away from liberal values ​​and democratic norms. The Israeli government is sometimes tempted to see the governments of these countries — such as Hungary — as allies and friends. This is due to block EU initiatives regarding the Israeli-Palestinian issue, and their readiness to stand by Israel in international forums. However, viewing these countries as friends is a mistake.

Israel’s foreign policy should indeed be distanced from far right-wing elements in Europe, but this is not enough. It must also emphasize the importance of democracy and show commitment and preference for establishing alliances with countries with a strong democratic regime, even if they disagree with the current policies of the Israeli government. Israel must belong to the family of democratic nations, and should not sacrifice this position for the sake of promoting ad-hoc interests.