Fiery Pulpits On the Home Front 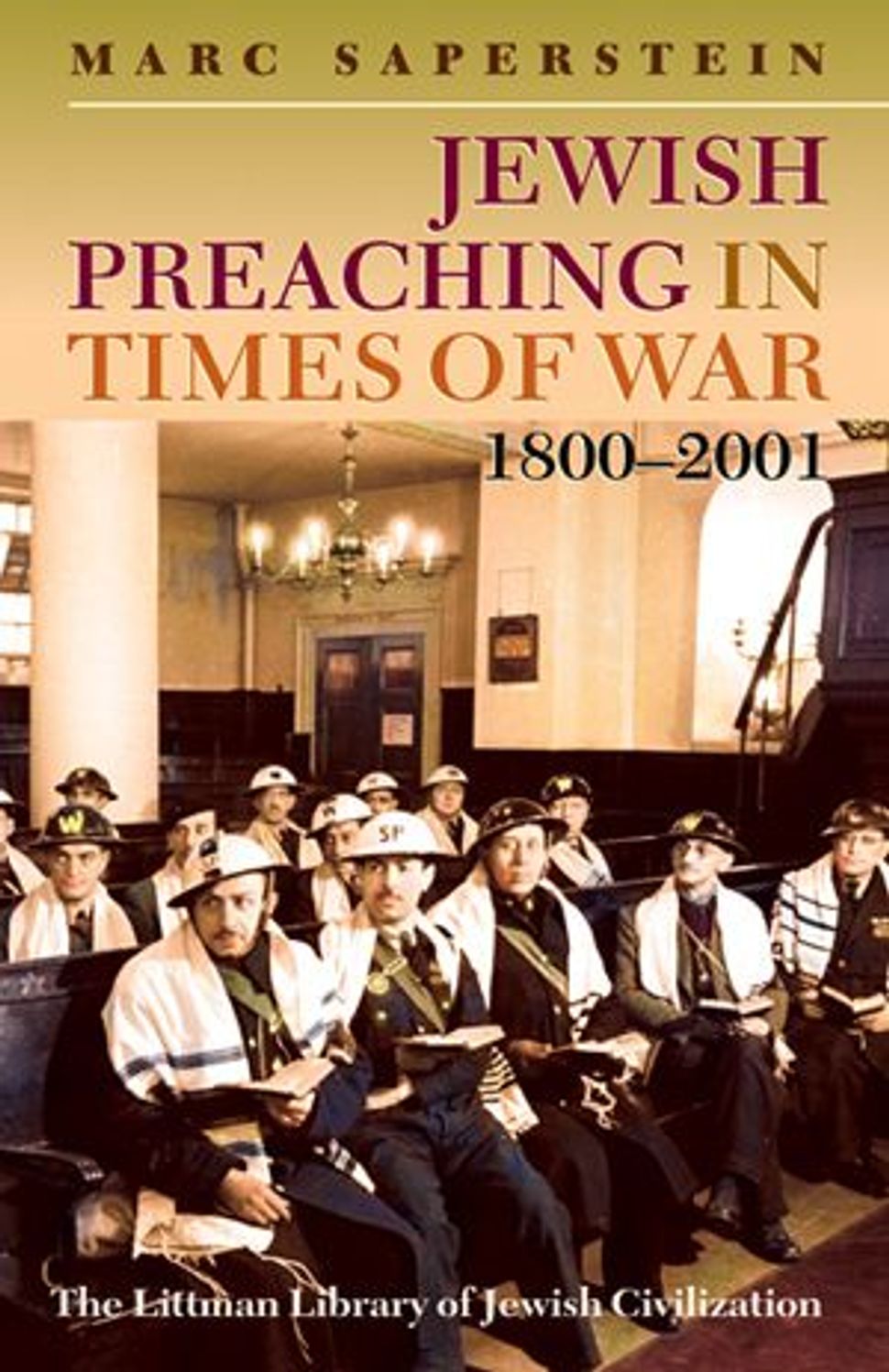 In his semiautobiographical masterwork, “Mercy of a Rude Stream,” the late novelist Henry Roth recalled his Uncle Louie’s little kitchen-table “sermon” that, mainly to his mortified mother, justified his decision to join the American army in the First World War:

“It’s natural for a child here in America to want to be a soldier. My two boys also want to be soldiers. It isn’t Galitzia where they cut off a boy’s toe so he won’t be conscripted… we Jews did that to a thousand, thousand infant boys to keep them out of the military, that they won’t have to eat pork, or most *treife *of all, to go into battle — and who knew? — at times against other Jews, fellow Jews in the opposing army. Why? We had no country, no?” 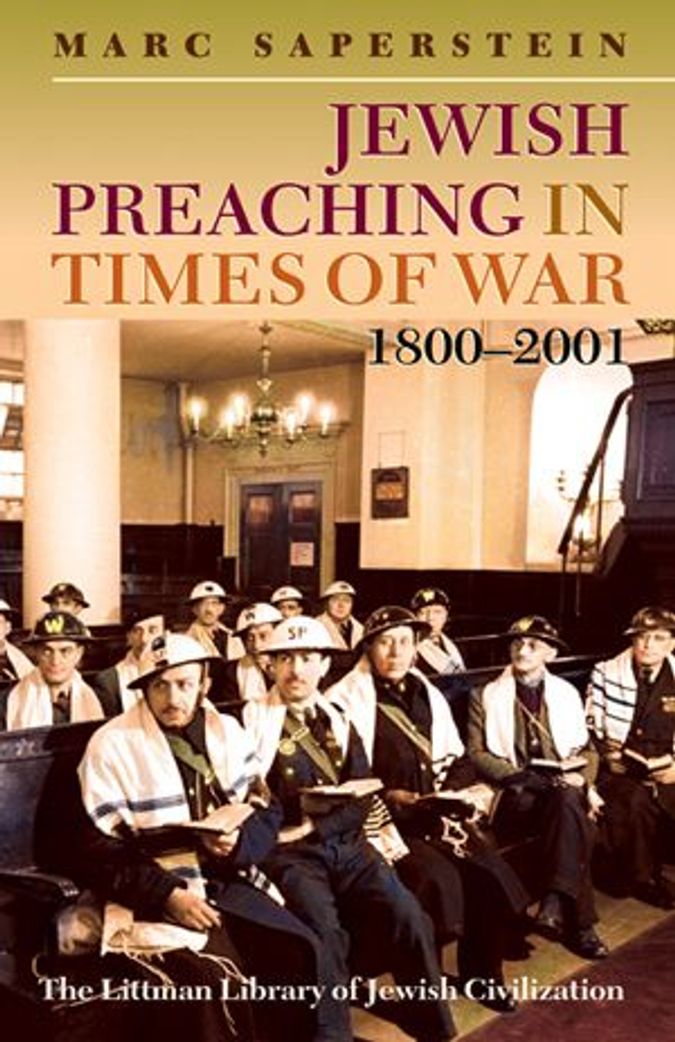 I was viscerally reminded of this passage when I came across the single most bone-chilling account of war, among the array of sermons brilliantly anthologized by Marc Saperstein, in the latest tome of what is fast becoming a one-man Encyclopedia of Rabbinic Homiletics — this being Saperstein’s fourth major volume on the subject — “Jewish Preaching in Times of War, 1800-2001.”

As Saperstein explains in his introduction, the sermons in this latest volume differ substantially from those in earlier periods of Jewish history. Whereas the classical rabbinic *derashot *(sermons) of the medieval and early modern eras were learned, exegetical homilies that relied heavily on elaborate expositions of the current *Sidrot *(weekly Torah readings) modern rabbinic sermons, if and when they referred at all to those biblical texts, used them at most only superficially, as a launching pad for autonomous speeches focused on current events.

Addressing one of the earliest Jewish community rallies, held in Washington and on behalf of the Jewish victims of World War I, on October 24th 1914, Gedaliah Silverstone, a Lithuanian Orthodox immigrant rabbi, spoke in heartbreaking tones of the terrible dilemma of the Jewish soldiers who were fighting valiantly on both sides of the “Great War”:

Powerfully dramatizing this point, Silverstone then recounted the horrific experience of a Jewish soldier convalescing in a Russian army hospital in Petrograd:

“Whose heart did not throb with agony, whose eyes did not fill with tears, whose blood did not turn cold in his veins upon reading in the newspapers about a Jewish soldier in the Russian army who stabbed with his bayonet a soldier from the Austrian army? The mortally wounded man cried out with his last breath: ‘Shema Yisrael Adonai Elohenu Adonai Ehad’ and with the word Ehad his soul departed. When the Russian soldier realized that he had killed one of his brothers, that he had thrust his bayonet into a fellow Jew, he went out of his mind with grief.”

This particular sermon stands out from most of the 40 assembled by Saperstein, as it takes no position on the merits of a war into which America had not yet entered. There is not to be found among the book’s other sermons so blunt an affirmation that the Jewish people have no stake in the wars of the nations.

Quite the contrary: Almost without exception, the British and American rabbis whose sermons fill this book went to great lengths, at times resorting to obvious convolutions of traditional Jewish ethics, in order to support the prevailing national — or, in the case of the American Civil War, regional — sentiments about the wars in which their countries, or states, were engaged. Especially striking is the contrast between the almost uniform championship of the ideals of peace, to the point of occasionally espousing a principled pacifism, by the American rabbis preaching during the periods of “neutrality” before the United States entered both world wars, with those same rabbis’ subsequently passionate and unmitigated support for America’s war efforts, from the moment the decisions were made in Washington to enter into battle.

To be sure, one might argue, as did Roth’s Uncle Louie, American Jews supported their country in both world wars with an unambiguous and natural patriotism that had no precedent in modern Jewish history. But whether this patriotism signified the un-conflicted empowerment of Jews bestowed by American citizenship or its very opposite remains far from clear. It is only in the two anti-Vietnam War sermons by Roland Gittelsohn Boston’s legendary rabbi, toward the very end of the collection that we first encounter a rabbi daring to oppose publicly a war in which America was actively engaged.

But before Vietnam, British and American rabbis both come across as entirely uncritical, and at times craven, in their unfailing support for their governments’ military adventures, including such morally dubious ones as the Boer and Spanish-American wars. Conversely, with post-Holocaust hindsight, it is terribly disturbing to read the isolationist calls for “neutrality” in the 1939 High Holy Day sermons of such notable Reform rabbis as Abraham Feinberg and Ferdinand Isserman. As Saperstein points out in his introduction to Feinberg’s sermon, the insistence of these rabbis that America stay out of the war against Nazism represented the general consensus in the American rabbinate across the denominational spectrum, until the attack on Pearl Harbor.

Even as they knew all too well of the deepening plight of the Jews of Germany since Hitler’s ascent to power, and were receiving evermore regular and gruesome reports of the horrific fate of Polish Jewry after the Nazi Blitzkrieg, the most powerful rabbis in America, speaking from her most prestigious pulpits — among them, Joseph Lookstein of Manhattan’s established Orthodox Congregation Kehillath Jeshurun, and his Upper East Side neighbor, Milton Steinberg of the flagship Conservative Park Avenue Synagogue — opposed joining the Allies in battle.

But this is just one of a host of fascinating historical issues and moral dilemmas raised by Saperstein’s rich collection. The very nature of the book’s core source material — originally addressed to the Jewish masses — renders this book eminently accessible and of natural interest to a very broad readership. At the same time, Saperstein’s extensive historical introductions to each of the sermons, along with his erudite annotations of these texts, will be of enormous value to scholars of modern Jewish theology and history.

One of the book’s most important contributions is to remind us of a time, in the not too distant past, when the words spoken by rabbis from their pulpits had enormous influence not just within the Jewish community, but also nationwide. Many of the sermons in this volume were reported on, some even reproduced in full, in the leading British and American newspapers, from both the Times of London and The New York Times to the Chicago Tribune, the Boston Globe and the former New York Herald. Before the age of the Internet and nonstop cable television news, rabbis were key sources of not only inspiration, but also essential information, about the great event of their times.

While the oratorical style and rhetorically inflated verbosity of many of these sermons may seem quaintly anachronistic, there are equally as many whose core messages, about the inherent evils of bloodshed, the obligation to maintain respect for the humanity even of mortal enemies, the moral pitfalls of inflamed nationalism and the chauvinistic jingoism it engenders, will resonate powerfully with contemporary readers in our own time of war.

Thus, it is almost impossible not to think of the human rights violations perpetrated by the Bush administration in the name of national security — especially against Muslim Americans — since the attacks of September 11, 2001, when reading Rabbi Hermann Gollancz’s First World War sermon. Alerting his London parishioners to the curtailments of the civil liberties of foreign-born British residents since the war’s outbreak, Gollancz presciently warned: “Is it not, alas, one of the signs of a degraded society, when encouragement is given to the ‘espionage’ of one’s own neighbor?”  Similarly, in one of the most powerful and eloquent sermons in this fine collection, the legendary Rabbi Stephen S. Wise thundered against an array of cultural degradations and human rights abuses unleashed by the nationalist fervor of that same war. Wise’s warnings are as urgent in our day as when he articulated them during the course of a strategically less dubious and morally less ambiguous war, so long ago:

“Can we win the war without losing America? Or must we, as has been urged, lose the best of our own possessions, democracy and individual liberty…. Are we to win the war upon Prussianism by adopting the Prussian method of that curtailment of liberty which is the end of liberty itself?… A people not free to express itself has ceased to be free to rule itself. We ask the young men of America to win the war. Let it never be needful for them to demand of us that we, who are to live amid security because of their service and their sacrifice, shall not lose their and our America.”

While Wise was here assailing the abuses of constitutional freedoms inherent in the Espionage Act of 1917, those precise words might just as well have been formulated in response to the USA Patriot Act, signed into law by an American president almost 90 years later. So, while its richness is of a primarily historical and theological nature, “Jewish Preaching in Times of War” hardly could have appeared at a more opportune moment in American, and world, history.

Allan Nadler is professor of religious studies and director of the Jewish studies program at Drew University.

Fiery Pulpits On the Home Front