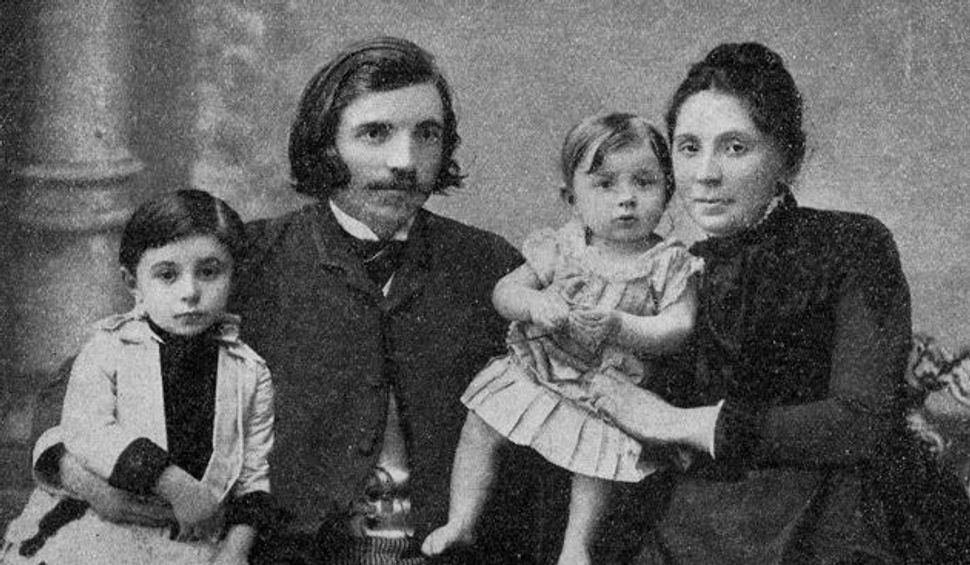 Tevye the Dairyman and Motl the Cantor’s Son
By Sholom Aleichem, translated from the Yiddish by Aliza Shevrin
Penguin Classics, 416 pages, $16.00.

Finding out exactly how many daughters Tevye actually has might be a tricky business, but no more so than settling the issue of how many translations into English of “Tevye der Milhiker” are available today.

The confusion regarding the number of daughters is a scholar’s conundrum. It’s the result of a number of factors, including the spontaneous, maybe even haphazard way in which Sholom Aleichem put together his narrative — in installments over a period of more than 20 years (1895–1916), while leading an itinerant exiled life. Congratulating him for the breadth, insight, and pathos of the protagonist — the verbose dairyman from Kasrilevke — might be enough to excuse him for any inconsistencies that might have popped up in the process. Let’s keep in mind that the business of copy-editors is, on the whole, relatively new. Sholom Rabinovich spoke the way he wrote, and vice versa.

Similar inconsistencies abound in other classics. In “Don Quixote,” Sancho Panza’s wife has multiple names, depending on where in the two-part novel you are. And Emma, the title character of “Madame Bovary,” changes eye-color as often as she changes her mood and her provincial banalities. Does anyone care? What matters is that time goes by and readers keep on plowing their multiple furrows, not solely in the original, but also in translation. Not counting unpublished or partial efforts, there are at least eight full-fledged translations of “Madame Bovary” into early modern English and about half as many of “Tevye the Dairyman.” That, clearly, is the attribute of a classic: its durability. Successive generations approach it with distinct sensibilities, infusing fresh meaning into it. For no work of literature ever has a fixed interpretation: It must be restored, revamped, reinvented in order to find an audience. Needless to say, behind the noble effort of translation is a sagacious publisher eager to make a profit.

And a voracious plagiarist. Everyone knows that translation is treason and translators are unredeemed copyists. Yes, translation is an act of violence. But I say this with utter reverence: Translators are cultural heroes. They are the closest to an ideal reader a text might ever have. Yet the chance they have of being original is as thin as a slice of salami. It couldn’t be otherwise. How many ways are there to render a sentence like “I love you” in another language? Of course, it is in the chemistry behind that sentence — the empathy between the fashion designer and his model — that the translator’s talent might flourish.

To celebrate the anniversary of Sholom Aleichem’s birth I decided to contrast Tevye’s newest apparel with the way he’s been dressed up in previous occasions. I did something similar in 2005 when “Don Quixote” celebrated its fourth century of galloping with its sorrowful countenance across time. I came across close to 20 different English translations — Shakespeare’s tongue was the first into which the first half of Cervantes’ magnum opus was rendered, in 1611, even before the second part was published in the original Spanish — which amounted to as many interpretations of the knight’s madness. Similarly, it has been an exciting endeavor to see Tevye through the kaleidoscope. Just as I have in my personal library hundreds of editions of Borges and Cervantes, over the years I’ve made it my mission to collect Tevyes. (Not to mention the bunch of film adaptations: Yiddish, Russian, American.) I have him schmoozing in German, Hungarian, en español. And I have him in a plethora of English styles. For concision’s sake, though, let’s trim the selection to three: by Frances Butwin, Hillel Halkin, and Aliza Shevrin.

How the classic is unraveled, how it is read, depends upon the historical circumstances in which it is placed. Butwin, a Polish immigrant to the United States, released hers a few years after World War II, as the Holocaust began to be digested and the shtetl was part of what I. J. Singer called “a world that is no more.” Halkin, an American Zionist who lives in Israel, did his for Shocken’s Library of Yiddish Classics. It appeared as the relationship of American Jews to Israel began to be tested during the first Intifada. And Shevrin, who grew up in Brooklyn and is the daughter of a rabbi, timed her rendition to commemorate Sholom Aleichem’s canonization. The fact that it is part of Penguin Classics is a major statement: Finally, Tevye sits alongside Abelard and Eloise, Machiavelli, Cesar Chavez, and his admired Gorky as a pillar of the Western Canon. He is no longer a Yiddish classic alone.

By way of example I’ve chosen a portion from “Chava” where father and daughter discuss his drastic attitude to cut her off from the family as a result of her liaison with a Russian non-Jew.

“Is it a crime then if a man works with his hands? Don’t you yourself work with your hands? Don’t all of us work?

“Yes, yes,” I said, “you are right. We have a certain proverb which says, ‘Whence thou eatest the labor of thine own hands – If you do not work, you shall not eat.’ But I still don’t understand what Fyedka is doing here. I would be much happier if you were friends at a distance. You mustn’t forget ‘Whence thou camest and whither thou goest—Who you are and who he is.’”

“Yes, yes,” I said, “God created Adam in his own image. But we mustn’t forget each man must seek his own kind, as it is written: “From each according to his means…’”

“Marvelous,” she cried. “Unbelievable! You have a quotation for everything. Maybe you also have a quotation that explains why men have divided themselves up into Jews and Gentiles, into lords and slaves, noblemen and beggars?”

“Now, now, my daughter, it seems to me you’ve strayed to the ‘sixth millennium.’”And I explained to her that this had been the way of the world since the first day of Creation.

“And why,” she wanted to know, “should this be the way of the world?”

“Because that’s the way God created the world?”

“And why did God create the world this way?”

“If we started to ask why this, and wherefore that, ‘there would be no end to it – a tale without end.’”

“Of course,” I answered. “You’re quite right. It even says as much in the Bible: yegia kapekho ki toykheyl—if you don’t work yourself to the bone, no one will throw you one, either…But what’s all that got to do with Chvedka? I’d feel better if you and he were friendlier at a distance. Don’t forget meyayin boso ule’ on atoh hoyleykh—just think of who you are and who he is.”

“So He did,” I say. “He created man in His likeness. But you had better remember that not every likeness is alike. Ish kematnas yodoy, as the Bible says…”

“It’s beyond belief,” she says, “how you have a verse from the Bible for everything! Maybe you also have one that explains why human beings have to be divided into Jews and Christians, masters and slaves, beggars and millionaires…” “Why, bless my soul,” I say, “if you don’t seem to think, my daughter, that the millennium has arrived.” And I tried explaining to her that the way things are now is the way they’ve been since Day One.

“But why are they that way?”

“Because that’s how God made them,” I say.

“Look here,” I say, “if you’re going to ask why, why, why all the time, we’ll just keep going around in circles.”

“Is it a fault in your eyes,” she said, “that a person works with his hands? Don’t you yourself work? And don’t we work?”

“Yes, yes, you’re right. We have a special verse in the Bible: For thou shall eat the labor of thy hands—if you don’t work, you don’t eat. But still and all, I don’t understand what Chvedka is doing here. I would be happier,” I said, “if you knew him from a distance. You mustn’t forget whence you come and whither you go—who you are and who he is.”

“God created all people equal,” she said to me.

“Yes, yes, God created Adam in his own image,” I said. “But you mustn’t forget that everyone must seek his own, as it says, To every man as he is able.”

“Amazing,” she said. “You have a quotation for everything! Maybe you can find one about how people separated themselves into Jews and Gentiles, into masters and slaves, into landowners and beggars?”

“Now, now! I think you’ve gone too far, my daughter!” And I gave her to understand that the world has been that way since the Creation.

“Why should the world be like that?” she asked me.

“Because that’s the way God created it.”

“Why did He create it like that?” “Eh! If we begin asking questions, why this and why that, it’s a story without an end!” I said.

Halkin’s is a philologist’s performance: show-offy, less enjoyment than calibrated lesson. Why does he use an Ashkenazic-accented approximation of Tevye’s misquoted Hebrew? Since the public are unable to follow the sources in the text, he glosses out the sentences and offers the exact source in the end matter. But the experience has already been tarnished.

In comparison, Butwin’s and Shevrin’s style is fluid to the point of being fluffy. Their transitions are more truthful than loyal. The transliteration of Yiddish names also feels less mannered. Still, Butwin prefers emphasis over subtlety: Her Chava talks of her father’s crimes, while Shevrin’s, more generous, sees Tevye only as faulty. Another challenge is to make Tevye and Chava speak in different ways. In this, Shevrin’s is better, I believe, although at times she might push the issue too far. “Amazing!” she utters. At times Chava, sounds like a Long Island girl. The reader feels words like “like” and “annoying” aren’t far behind.

Reading this triptych together might be a maddening exercise. Butwin presents the “Tevye” chapters in disorganized form; she juxtaposes stories from other books by Sholom Aleichem. The result is a bouquet of tales that is contradicted in her introduction, where she examines – needlessly, it turns out — how the entire novel’s economy works. As far as editing, Halkin is the most conservative, leaving out anything extemporaneous. Shevrin adds the brief section “Kotonti — I Am Unworthy” as an introduction and “Vachalaklokos” as a conclusion. And yet, and yet, none of these dress designers has dared to add a new daughter to Tevye’s family, unlike, for instance, the translators of “The 1001 Nights” who had the temerity to come up with Sinbad’s fortunes, absent in the original.

Which of these Tevyes is the best? The answer is that Sholom Aleichem’s creation is a man for all seasons.

Ilan Stavans is the Lewis-Sebring Professor of Latin American and Latino Culture at Amherst College. His anthology “Becoming Americans: Four Hundred Years of Immigrant Writing” (Library of America) will be published in October.