Shake a Family Tree And a Jew Falls Out

What Could Have Been: Jodensavanne lies in jungle ruins while the capital?s Neve Shalom temple is magnificent beside the mosque in the town center. Image by Michael Kollins 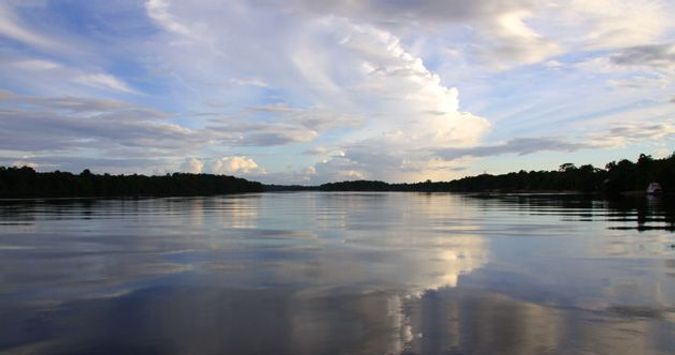 The Jordan of the West: The river Suriname flows past Jodensavanne and Paramaribo before reaching the Atlantic. Image by Michael Kollins

On a Thursday morning, I stop by the restaurant Shoarma Tel Aviv on the way to visit an ancient Jewish cemetery. Friday night, I attend services at an 18th-century synagogue. The restaurant is owned by a Hindustani, and the floor of the synagogue is covered with sand. Where am I? If you guessed Suriname, congratulations — you’ve probably been there. The size of Georgia, but less populous than Atlanta, this former Dutch colony sits along the Caribbean coast of South America. The country is mostly covered by rainforest. It is green, empty and hot. Hot like sitting in a car with the windows rolled up on a humid summer’s day. Until the rains come. Then, an afternoon in Suriname feels like sitting in a car on a summer’s day with the windows down while going through a carwash.

The capital city, Paramaribo, called Parbo for short, stretches inland along the broad Suriname River. Its colonial-era clapboard houses are painted white and trimmed in black, red or green. Settlers built their homes with broad porches to catch the trade winds that blew in from the coastal mud flats and mangrove swamps. Once, Suriname was rich in sugar cane and coveted by warring European powers. They turned Parbo into a major port and wealthy outpost. The colony was so promising that in 1667, the Dutch traded it to the British in exchange for New Amsterdam. With a few twists of history, Paramaribo might have become Manhattan, but today it’s a sleepy town, shut tight against the afternoon swelter while dogs doze in shady doorways.

Portuguese Jews fleeing the Inquisition arrived here in the mid-1600s via Holland and Brazil, giving Suriname claim to being one of the oldest Jewish communities in the New World. A tolerant Dutch government later granted Jews an autonomous settlement, about about 35 miles upriver from the capital. The area, known as Jodensavanne, the Jewish Savannah, thrived on sugar cane plantations and on the slaves who worked them. Jews mostly abandoned Jodensavanne by the early 19th century, after a period of economic crises punctuated by violent slave revolts, though worshippers gathered at the synagogue until it burned down in 1860.

What Could Have Been: Jodensavanne lies in jungle ruins while the capital?s Neve Shalom temple is magnificent beside the mosque in the town center. Image by Michael Kollins

Parbo then became the center of the influential Jewish community of Suriname. Their political power was such that in the immediate pre- and post-World War II era, Suriname, then Dutch Guiana, was considered a potential site for large-scale Jewish colonization. The territorialist Freeland League attempted to secure a modern Jodensavanne in the Saramacca region of Suriname, where an enclave of Yiddish language and Jewish culture would be established. Today, the relics of Jodensavanne endure in the midst of an ever-encroaching jungle.

On my first night in Parbo, I meet with Surinamese author Cynthia McLeod, a coffee-complexioned woman in her 60s. McLeod is best known for her historical novel, “Hoe Duur was de Suiker?” (translated into English as “The Cost of Sugar”) set in the Jodensavanne. She traces her heritage back to Jewish forebears. “Every Surinamese has Jewish blood,” she told me. “Shake a family tree, and a Jew falls out.” McLeod explained that Jewish plantation owners kept slave mistresses with whom they had children. “There is a responsibility to acknowledge this history of slavery,” she continued. “American Jews don’t want to speak of this, but [Jews] did [have slaves] in Suriname; we can prove that.” Still, she added approvingly, “Other colonists came to get rich, while Jews came to make Suriname their home.”

There’s no question that the Jews, now numbering fewer than 200, once had an outsized impact on the country. The beautifully preserved Neve Shalom synagogue sits in the town center, next to the largest mosque in the Caribbean. Afro-Creole women wear Stars of David. Traditional Surinamese Jewish dishes — like pom, a kind of cassava root mashed with chicken, once eaten by plantation owners on Passover — have since become a national treat. Even Hebrew has found its way into Sranan Tongo, the local language, by way of former slaves. The word *treefu *— from treyf — still refers to taboo foods and behaviors. The legacy of Jodensavanne’s first settlers persists if you know where to look.

I’m helped in my search by businessman Guido Robles, who heads the Jodensavanne preservation committee. A muscular man with close-cropped salt-and-pepper hair, Robles explains that the journey to Jodensavanne can be difficult. Red-dirt roads are dusty when dry. Bauxite trucks lumbering to and from area mines stir up road grit that cuts visibility to nil. In the rain, dirt turns to mud and makes the route treacherous. Oh, and the bridge to Jodensavanne collapsed. “A drunken ship captain rammed it,” he explained, rolling his eyes in a dismissive manner that suggests he could have done a better job of piloting the ship. Undaunted, I set out to explore with my friend and photographer, Michael Kollins.

The ride is smoother than Robles warned. The road is bounded on both sides by tangled overgrowth. If you were to walk 50 yards into the maze of trees and vines, you might be lost forever. As promised, we reach the riverbank and spot a half-submerged span of concrete lying in a channel alongside the wrecked hulk of a barge. The incomplete arch of the bridge deck yawns overhead like a gap-toothed smile. An enterprising local operates a ferry that holds three vehicles but chugs across with barely enough horsepower to fight the river’s current. I back the Toyota 4×4 up a clanging metal ramp and nestle bumper-to-bumper behind a small truck carrying Diesel fuel. After two attempts to steer the ferry into dock, we’re successfully across, and once again, bouncing in the pick-up through deep ruts, toward the ruins of Jodensavanne, which once was known as “Jerusalem on the River.”

The turn-off from the dirt road is marked by a weather-beaten metal sign that points toward a trail. No one guards the entrance, though a barrier stops anyone from driving into the site itself. Mike and I swing on our packs and walk beneath a dense forest canopy, while insects buzz around our ears. Soon we come to the root-humped remains of the Jewish cemetery. The tombstones are flat, rectangular stones that rest horizontally on the ground. Each stone is the size of a person — or, in the case of the many children’s graves, achingly small. Centuries of rain and neglect have worn away the Hebrew and Portuguese inscriptions. Beyond the cemetery, the tropical vegetation falls away at either side, to reveal a grassy clearing and the brick foundations of one of the earliest synagogues in the Americas, Beracha ve Shalom. “It’s like Indiana Jones goes to temple,” my friend quipped. The synagogue rests on a hillock with a commanding view of the Suriname River.

Nearby, just beyond the village of Redi Doti, the even older Jewish cemetery of Cassipora rests in jungle seclusion at the edge of a slash-and-burn pineapple field. With the help of local Peace Corps volunteer Jeff Schulte, a machete and a handheld GPS unit, we manage to hack our way into the site. In the riot and profusion of the jungle, it takes awhile for my eyes to adjust. I make out two matching prism-shaped tombstones that jut from the undergrowth. Lianas obscure some gravestones, and gnarled roots crack others in half. The stones are wet, some covered in a layer of leaves and loamy earth. We pick our way among the graves until the GPS goes dark: The canopy is too thick to catch the satellite signals. Suddenly we’re alone, cast into a timeless and abandoned world. An unseen bird lets out a mournful call. We wander, without purpose, until we find a signal and slash our way out.

Back in Parbo, Mike and I head to Neve Shalom on Friday night at the invitation of Lily Duym, the energetic vice president of the Jewish community. She claims descent from Isaac Abravanel, the Jewish moneylender who may have financed Columbus’s voyage of discovery. Now, she said, “my family just runs the synagogue, and what I need is a rich rabbi to retire here” and take over. The crowd of 30 or so congregants is white and black and brown, dreadlocked and balding, but everyone chants the prayers, singing out Hebrew verses to the empty balcony and roof beams overhead. As we file out and exchange Sabbath greetings, we leave behind our footprints on the sandy floor — traces of a presence more easily obscured than those left hundreds of years ago by the Jews now resting beneath the jungle in Jodensavanne.

Adam Rovner is assistant professor of English and Jewish literature at the University of Denver, and serves as the translations editor of Zeek: A Jewish Journal of Thought and Culture.

Shake a Family Tree And a Jew Falls Out