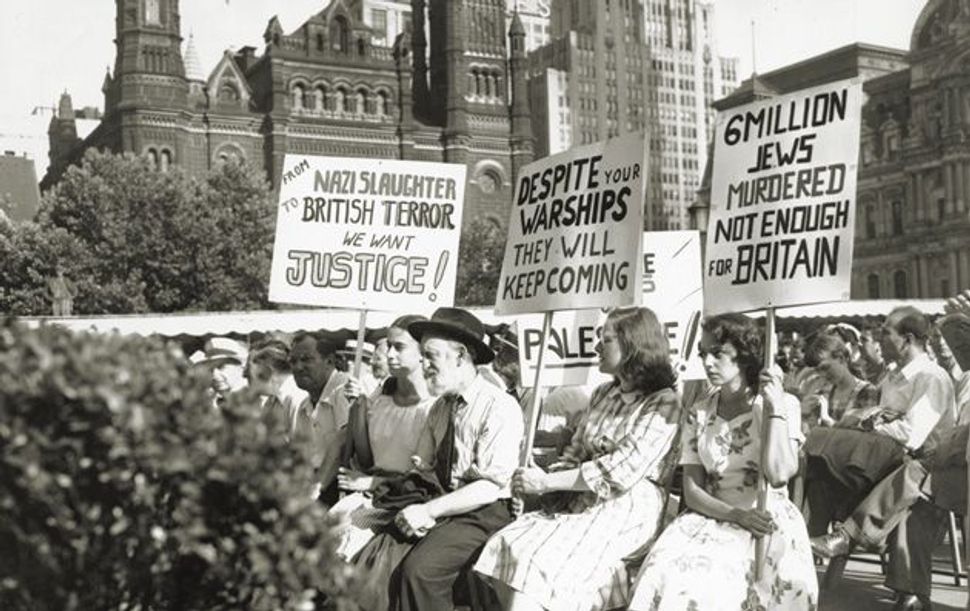 City Hall of Brotherly Love: These protesters outside Philadelphia?s City Hall in 1947, explicitly linked the Holocaust, Israel and the mistreatment of Jewish refugees under the British Mandate. Image by COURTESY OF TEMPLE UNIVERSITY LIBRARIES, URBAN ARCHIVES, PHILADELPHIA 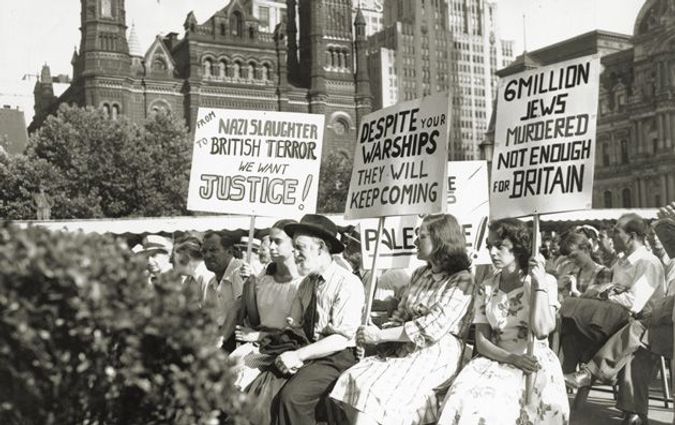 City Hall of Brotherly Love: These protesters outside Philadelphia?s City Hall in 1947, explicitly linked the Holocaust, Israel and the mistreatment of Jewish refugees under the British Mandate. Image by COURTESY OF TEMPLE UNIVERSITY LIBRARIES, URBAN ARCHIVES, PHILADELPHIA

We Remember With Reverence And Love: American Jews And The Myth Of Silence After The Holocaust, 1945-1962
By Hasia Diner
New York University Press, 528 pages, $29.95.

Hasia Diner is a historian who believes that things actually happened in history. She is also comprehensive, indeed dogged in her research, which her oeuvre amply demonstrates. Diner, who teaches history at New York University, made a major contribution with her superb “A Time for Gathering: The Second Migration” (Johns Hopkins University Press, 1992), which articulated for many of us a vocabulary for understanding mid-19th century American Jewish history. In her latest work, “We Remember With Reverence and Love: American Jews and the Myth of Silence After the Holocaust, 1945-1962” — also an assiduously researched book — Diner tackles the question of consciousness of the Holocaust in America. Diner’s mission is to explode the eponymous “myth” that there was only a gradual evolution of Holocaust consciousness. Diner asserts that much of postwar American Jewish history and public affairs needs to be understood in the context of the Holocaust. There was no “silence” about the Holocaust — far from it. Diner avers that discussion, programming, and indeed activism of and about the Holocaust were the reality from early on, right after World War II.

The author bombards us with data in support of her thesis. Holocaust observances, memorials, programs, school curricula, survivors’ gatherings, literature both serious and popular — all and more are catalogued by Diner in her effort to demonstrate not only that people knew about the Holocaust, but that the Holocaust had come immediately to centrality in American Jewish life.

Diner’s view is, on its face, plausible. The activities she documents did take place. There is much of interest, and of value, in Diner’s catalogue. But the reality is that whatever memorials and other programs took place, overall these were marginal to the core agendas of American Jews, both individually and as a community.

Why this notion is so, is a matter of debate. On the one hand, there was the powerful psychological dynamic of many survivors who were reluctant to talk about the past. At the same time, there was an American Jewish community that — in some of the most shameful and shabby episodes of our history — in many cases treated the survivors with contempt. When survivor groups in the early 1960s went around to synagogues in New York, hat in hand, for a place to hold their first commemorations, they were turned away at the door. (It was Temple Emanuel that in 1967, after the survivors had held two commemorations at Carnegie Hall, hosted the first communal synagogue-based Holocaust commemoration in New York.)

More important was the nature of the American Jewish communal agenda during the 1940s, ’50s, and ’60s. The priorities on the national agenda moved from antisemitism — absolutely regnant until the mid-1950s — to civil rights, which was the central issue to American Jewish groups until the mid-1960s. In the mid-1960s two things happened that irrevocably changed the nature of the Jewish communal agenda in America: the beginnings of the Soviet Jewry movement in the United States in 1963, and the Six-Day War in 1967. The most important result of the 1967 war was that for the first time, Israel was absolutely front-and-center as a priority for American Jews and Jewish organizations.

From policymakers to professional historians to community members, many had thought that the 1960 Eichmann trial in Israel would generate American Jewish consciousness of the Holocaust. But this trial happened in Israel, not in the United States. It was the Six-Day War, with the specter of another Holocaust in the days and weeks prior to the conflict, which in the view of many triggered for the first time consciousness of the Holocaust. Many analysts maintain that it was not the Six-Day War but the screening in 1978 of Gerald Greene’s landmark television series Holocaust that was the key. Whichever is the case, the Holocaust was not in the forefront of the Jewish personal or organizational mind until relatively late.

Part of the problem is that Diner falls into the trap that has ensnared many a scholar of the American Jewish experience who addresses issues of public policy as processed by Jewish communal organizations. Historians are rarely sure-footed when it comes to the organizational dynamics of the American Jewish community. Examples abound: The “American Jewish Year Book” is pretty much the document of record for Diner when it comes to American Jewish affairs, fair enough. The Year Book is a most important resource; but more telling in terms of what was on the Jewish communal agenda was the annual “Joint Program Plan” of the National Community Relations Advisory Council. This latter was the contemporary document of record when it came to what Jewish groups were thinking about and doing in public affairs, but is overlooked by Diner.

Likewise, Diner overstates the “swastika epidemic” of the late 1950s in terms of its impact on survivors’ activism. “The survivors shook up the American Jewish communal framework” over American Nazi George Lincoln Rockwell and swastika daubing? That statement is hardly the case. And Diner would have it that the Holocaust was the raison d’etre for the respected Orthodox journal Tradition getting off the ground in 1958. Not true: Tradition was an important part of the warp and weft of an American Orthodoxy that was shaping its own intellectual and religious contours at that time; the Holocaust was, at most, a minor factor in the genesis of the journal.

There are other missteps in “We Remember with Reverence and Love.” It is deeply troubling that Diner lumps together Norman Finkelstein and Peter Novick, historians who assert the thesis of American Jewish Holocaust avoidance. Both are fierce critics of the American Jewish establishment, especially with respect to processing the Holocaust; but it does her scholarship a disservice to talk about these two in the same breath. Whatever one thinks of Novick’s conclusions, agree or not — and I have serious questions about his views on Jewish organizations cynically manipulating the Holocaust — Novick is a serious historian who, in his “The Holocaust in American Life,” did truly amazing archival research. Finkelstein, by contrast, is simply out to “get” the Jewish organizational establishment by attacking the use of the Holocaust as a means of rationalizing the abuses of the State of Israel, which Finkelstein detests.

Having said these things, Diner is right on the mark in her discussion of the landmark “Studies in Prejudice,” commissioned in the late 1940s as a series of studies, published as books by the American Jewish Committee. These included a number of watershed volumes, which are duly noted by Diner, although she inexplicably fails to note the most important work in the series, the classic “The Authoritarian Personality.” The AJCommittee was responding to the potential of an authoritarian threat in the United States, and concluded that people who are anti-Jews will be anti-other groups. But the AJCommittee research program was not, as Diner would have it, a vehicle “to advance its liberal agenda” — unhelpfully imputing ulterior motives — but for establishing strategic and tactical guidelines for combating prejudice in this country.

“We Remember with Reverence and Love” is a treasure trove of reproductions of posters, flyers and handbills, advertisements, cartoons, sheet music and other early postwar popular-culture artifacts. These memorabilia (with their helpful descriptive captions) are invaluable resources. And Diner’s long chapter on Germany and Germans in the post-war era is splendid. Both the data in this chapter, and the analysis about Germany in the postwar era that flows from those data, will serve scholars well, even though Diner’s discussion of the Christian rescuers of Jews is off the mark.

“We Remember with Reverence and Love” is a valuable volume; the prodigious research in the book will be of immeasurable assistance to scholars. But Diner’s history of the American Jewish communal response to the Holocaust, in terms of political and public-affairs dynamics — and those are the ones that count — is flawed. What happened, in the end, proved to be far less significant than the myriad of events recorded by Diner. However we regret it, American Jews did not in the postwar years acknowledge the Holocaust in a way it should have been acknowledged, recalled, commemorated; and no amount of 21st century review can change that.

Jerome A. Chanes is the author of the award-winning “A Dark Side of History: Antisemitism through the Ages” and the forthcoming “The Future of American Judaism” (Columbia University Press).