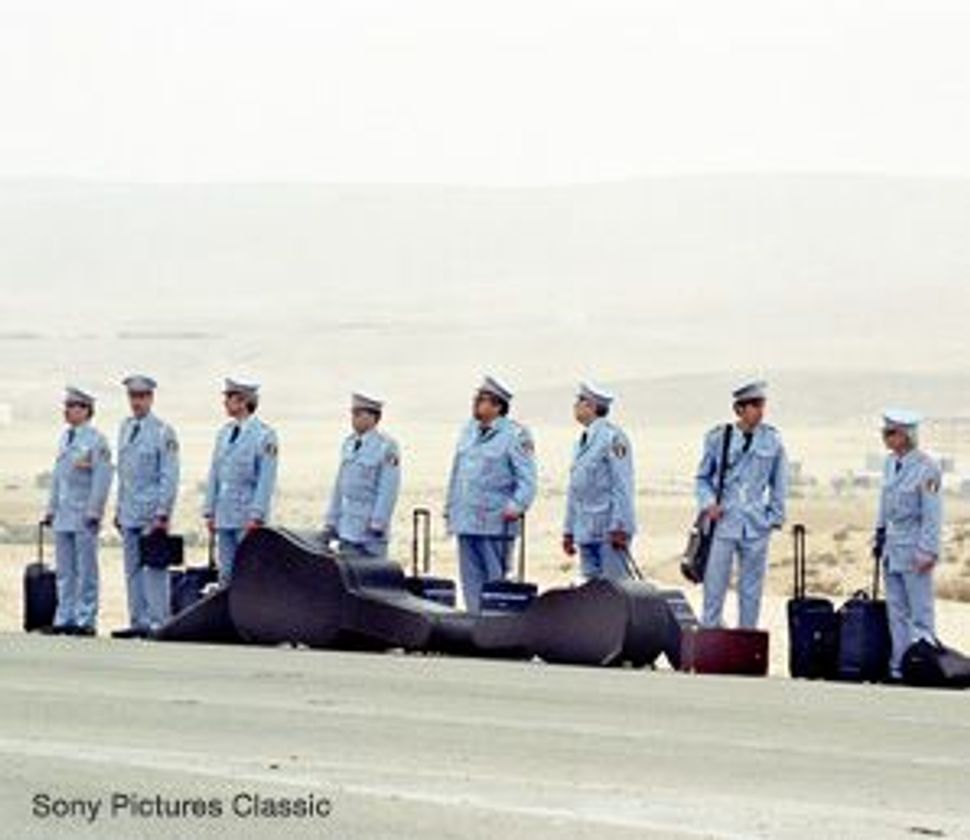 Israeli cinema has made some notable strides over the past few years, thanks to a new generation of documentarians and the bohemian visions of the likes of Eytan Fox (“Walk on Water,” “The Bubble”) and Avi Nesher (the entertainingly ambitious “The Secret,” which may be the world’s first lesbian-Kabbalah-grrl power-yeshiva drama). These filmmakers have taken the country’s film culture in the right direction. But that culture still lacks a defining vision, and the movies that can represent it — the country’s “Citizen Kane” or “Casablanca,” or even its “E.T.” or “The Breakfast Club” — to help it move beyond the impressive but ultimately narrow films of Amos Gitai and a generation of political directors. 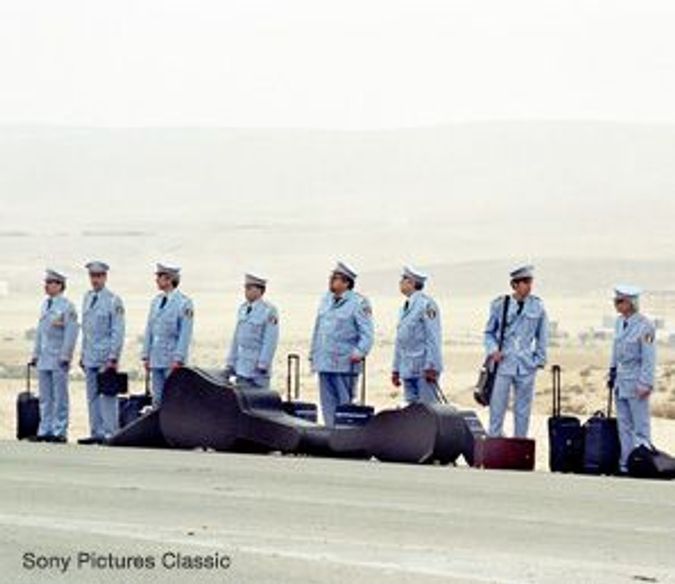 Despite buzz that’s climbing to ever-higher decibel levels, that savior is not, alas, Eran Kolirin’s “The Band’s Visit,” a charmingly low-key dramedy that borrows more from fish-out-of-water American indie movies than it forges a unique conception of Israeli film.

There’s reason, from some of the early accounts, to think it might. If you haven’t heard of “The Band’s Visit” yet, you soon will. The movie has been riding a swell of hype several months ahead of its December release from the foreign-language experts Sony Pictures Classics (which distributed last year’s Oscar winner “The Lives of Others” and is behind this year’s quirky and wonderful “Persepolis”). Already it has won prizes in festivals from Cannes to Sarajevo to Tokyo to Montreal; hardly a week goes by without its winning a new one. The movie also swept the Ophir awards, the Israeli equivalent of the Oscars.

To hear some of its early fans tell it, you’d think the movie could augur a Middle Eastern new wave, sweep the world in a kind of multicultural euphoria, and transform our understanding of the Israeli and Arab psyches. (“Underlying it all is the tension inherent in Arab/Israeli relationships. [The movie] offers a hopeful look at both sides,” the online review outlet Reel.com says.) “Band’s” also has been drawing buzz as a serious contender for the foreign-language Oscar, or at least it had been. Three weeks ago, the Academy of Motion Picture Arts and Sciences ruled that the film’s large amount of English dialogue made it ineligible; the Israeli film commission then nominated another choice. The academy’s decision prompted an outcry, most notably from L.A. Times columnist Patrick Goldstein, who, after lauding the movie, protested that the academy “has put itself in an indefensible position by devising rules that are needlessly arbitrary.”

All the frenzy around “The Band’s Visit” serves to oversell, and perhaps even obscure, what is a solid film but not a groundbreaking one. I wonder to what degree viewer expectation plays a role in the hoopla. Absent in Kolirin’s debut (he previously worked on a number of TV projects, including the acclaimed Israeli psychotherapy drama “B’Tipul”) is the hurly-burly of Tel Aviv party life and the powder-keg of West Bank checkpoints — in other words, the building blocks of pretty much every contemporary Israeli movie. In their place come small incidences of humanity, of melancholy, and of sly, restrained humor. That’s nice, and it may be refreshing to viewers of Israeli film, but it will seem like nothing new to fans of movies like Kenneth Lonergan’s 2000 small-town drama “You Can Count on Me” or pretty much every John Sayles film, to name two, among many, possible examples.

The central premise of “The Band’s Visit” involves an Egyptian policemen’s band forced to spend the night with a group of strangers in small-town Israel. It’s an unfussy conceit, meant to bring a host of very different characters into contact. The group of about eight musicians has been invited by a cultural organization to play in Petah Tikvah, but through a slapsticky contrivance (hearing a ‘P’ as a ‘B’) the Egyptians end up traveling to the bedroom community of Bet Hatikvah instead. The Israelis are amused at the sight of these men in their rigid blue uniforms, all respectability and starchy officiousness. But the Egyptians, who repeat “Alexandria Ceremonial Policemen’s Orchestra” to all who care to know as though it’s some kind of secret password, are genuinely confused when this affiliation stirs no reaction.

Leading them in their befuddlement is the band’s conductor, Tewfiq (Sasson Gabai), a soft-spoken man who has not so much donned the mask of ceremony as retreated behind it. While not a general, he embodies a buttoned-up military dignity that contrasts with the brusque Israelis around him. His aloofness serves as both a capably objective lens through which we watch the proceedings and a source of comedy in its own right. His, and the band’s, politesse is a perfect foil for the impatient aspects of the Israeli national character, which Kolirin captures in a dead-on opening scene that will resonate with anyone who has ever had even a brief, er, rendezvous with the Israeli bureaucracy.

The movie generates plenty of sparks from this collision; a scene at a dinner table finds the Egyptians as bemused by the high-pitched squabbling of the Israelis as the Israelis are with the Arab formality. Kolirin also rummages in the attic and finds the indie director’s treasure chest of characters: a former party girl making an uneasy transition to middle age; the awkward postadolescent still trying to find his groove with the opposite sex, and a town weirdo who hangs around by the phone booth for no apparent reason (but ah, he does have a reason, of course).

Bet Hatikvah, needless to say, is not a place where there is much to do. Kolirin indulges in long, quiet shots of empty streets, their red-and-white curb markings the only sign that this is small-town Israel, not Nebraska. One of the band members tells a local that he wants to “look on the town” — a fitting malapropism, since look is pretty much all there is to do. In parallel plotlines, the band members set out to visit homes and to, well, look on the town, engaging in varyingly poignant interactions. There’s the relatively ordinary drama of watching a disconsolate young father and husband adjust to family life, and a convincing scene as Tewfiq and a tough, sad 40-something woman named Rina (Ronit Elkabetz, who, along with Gabai gives the film’s best performance, wearing her past like a pair of glasses) air their regrets. And the movie has a moment of comedic genius in a roller-rink scene that’s equal parts Danny Kaye and “Freaks and Geeks” (let’s just say it involves a shy dater, a band member and several awkwardly placed knees and hands).

It’s all very pleasant, occupying the territory, if you will, between weepy and cynical, which is no easy feat. But it’s impossible not to wonder if Kolirin settled for a good movie instead of aiming for a great one. By mainly staying away from both politics and culture, he may have hoped to make more credible comments on two societies close in proximity but far apart in temperament. And the movie, thankfully, refrains from easy reconciliation or debate (no “Munich”-style arguments here) while making some worthwhile observations about Israelis’ complicated, sometimes romanticized relationship with Arab culture. (Rina tries to seduce Tewfiq because she remembers her childhood obsession with Omar Sharif.)

But if the film is to stand at the fore of a new generation of moviemaking — or, for that matter, earn the praise showered upon it — it also should reflect an original voice or weigh in with uncommon insight. It doesn’t. “Band’s” lacks too many of the defining characteristics of either culture to make its points with any specificity or conviction; replace all this with a Mexican mariachi band stranded in a dead-end town in the American South, and I’m not sure you’d have a much different movie. Remorse and the struggle to overcome the past, to name two of the film’s dominant currencies, manifest in many societies, and what Kolirin has to say about its role in this one doesn’t seem like a terribly important addition to what has previously been said onscreen. In this regard, at least, the academy is right, albeit for a different reason than the one given. “The Band’s Visit” shouldn’t be allowed as the Israeli entry — not because it fails to meet an arbitrary language word count but because it doesn’t feel different from so many American movies we’ve seen before.

The goal of early Zionism was, according to its proponents, to be a nation among the nations. By this standard, I suppose, Kolirin has pulled off his aims serviceably; Israel now finally has a humanist drama to call its own. One only wishes that a director of Kolirin’s obvious talent had done more to distinguish his film from those of other nations.

Steven Zeitchik is a senior writer at the Hollywood Reporter.