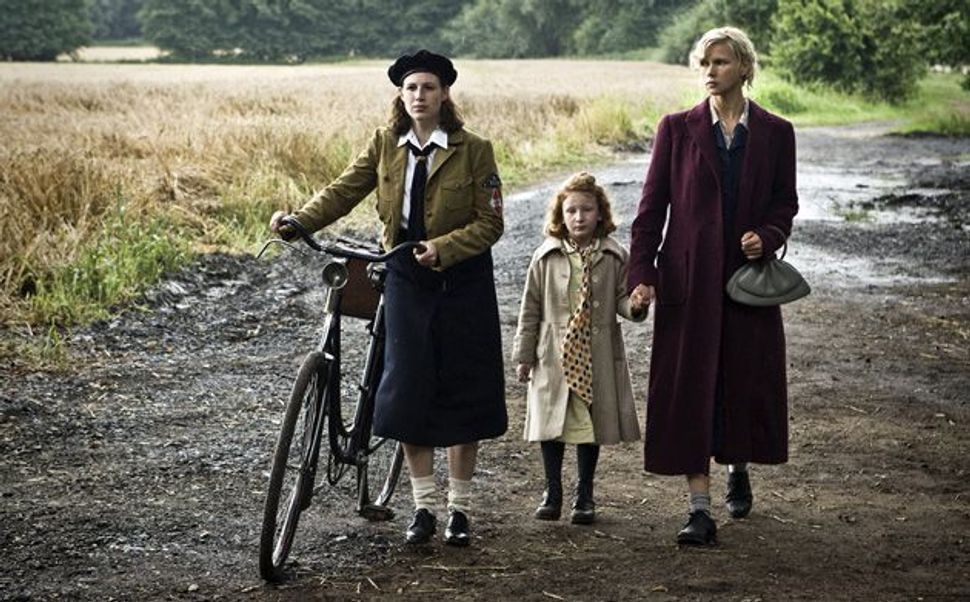 A Country Welcome: Marga Spiegel (Veronica Ferres, right) and her daughter Karin (Luisa Mix) were sheltered from the Nazis by Westphalian farmers and their families. Image by COURTESY OF MENEMSHA FILMS

Steven Spielberg’s “Schindler’s List” introduced the world to the improbable enigma and moral dilemma of a German Nazi Party member who rescued Jews. The combined commercial forces of Spielberg and the Hollywood image-making machine turned Oskar Schindler into a larger-than-life hero.

The New York Jewish Film Festival, presented by the Jewish Museum and the Film Society of Lincoln Center, features a less glitzy although no less sobering portrait of Germans doing the right thing despite the enveloping Nazi evil that surrounded them, with its gripping opening night film, Ludi Boeken’s “Saviors in the Night.”

The film is an unsentimental and yet hair-raising recounting of the risks taken by German Nazi Party members — essentially, peasants from Westphalia — who sought to save a Jewish family from certain death.

The festival opened January 13 with a film that celebrates the moral courage of Germans rather than the more conventional and convenient depiction of Germans as monsters is a curious and brave choice for the New York Jewish Film Festival. After all, few films about German rescuers have been made. Most have been about the heroic righteous gentiles who happen to be Poles, Danes, Dutch or French. One notable exception, aside from “Schindler’s List,” is Leonard Gross’s “Last Jews In Berlin,” the true story of Countess Maria von Maltzan, who rescued her Jewish boyfriend and others through a network that sheltered Jews in Berlin.

The story of rescuers, particularly German rescuers, is perhaps too emotionally threatening to those who prefer their Nazis to be predictably murderous and sharply fanged. Anything less also challenges the presumption, popularized by Daniel Jonah Goldhagen’s “Hitler’s Willing Executioners: Ordinary Germans and the Holocaust,” that Germans were basically “eliminationist” antisemites.

“Saviors in the Night,” based on Marga Spiegel’s 1969 memoir, “Unter Bauern: Retter in der Nacht,” presents ordinary members of the Nazi Party as being quite capable of resisting not only the rampant Nazi propaganda, but also the remedy of a Final Solution to rid Germany of the misery caused by its Jews. For some Germans, in fact, the Jews were human beings — just like themselves.

Boeken’s own family saga resonated with the themes of Spiegel’s memoir. Farmers in Amsterdam hid his Jewish parents, and he grew up in Israel, obviously enamored of the kind of men and women who would risk all for the sake of remaining moral in a world of madness.

Ironically, given Germany’s sensitivity about never wishing to appear insensitive regarding the Holocaust, Boeken was told that the German government would not subsidize a film in which the prominent characters were both Nazi Party members and rescuers. The latter were, apparently, always virtuous and worthy of a feature film, while the former are inexorably beyond contempt. So the film became a collaborative venture among Holocaust survivors, their descendants and German Christians of all generations — all for the purpose of redeeming the irredeemable.

The saviors depicted in “Saviors in the Night,” however, have their work cut out for them. The film tells the desperate tale of Siegmund “Menne” Spiegel (Armin Rohde), a horse tradesman married to a Rothschild. When the last Jews in Westphalia are deported east in 1943, Menne bumps into a fellow Iron Cross comrade and asks if he could find refuge on his farm. Heinrich Aschoff (Martin Horn) does not hesitate to offer refuge — but only to Menne’s daughter and wife, who are sufficiently tall and blond enough to pass as Aryans.

Rescuers, after all, are not merely daredevils on a suicide mission — they also want to survive, and are often forced to offset their moral judgments with shrewd calculations. Menne’s dark features make him stand out among the general German population, so he is forced to hide elsewhere, moving from farm to farm, all the while escaping detection and the certain fate of the resettled Jew.

This understated German film with English subtitles, shot in 16 millimeter and blown up to 35, eloquently directed, sparingly but authentically portrays the daily lives of the victims, rescuers, perpetrators and bystanders on the farm and their interactions with fellow townspeople.

Menne’s wife, Marga (a keen performance by Veronica Ferres), prepares her daughter for the new identity the family will take on as ordinary farmers sharing a home with Nazis who attend church and are depicted as ideologically diverse and complex. Heinrich’s son is volunteering to go to war, while Heinrich’s wife is proud of the sacrifice the family is making for the Fatherland. Heinrich’s daughter — to put a complicated cat among the pigeons — is dating the local Nazi youth group leader.

For a foreign film on an indie budget, the movie provides the kind of rollercoaster tension of a Hollywood thriller. Menne manages to remain one step ahead of those who wish to denounce him. In homage to moral ambiguity and human complexity, at the film’s end the American liberators cannot so easily separate the collaborators from the sympathizers, or the Germans from the Jews.

Although those Germans who are honored at Yad Vashem as the Righteous Among the Nations did not change the course of history, it is almost unimaginable to think that some people managed to remain human — even among the monsters. Yad Vashem has acknowledged 300 Germans worthy of this honor, although there were probably many more whose names were never known, because the Jews they sought to save were either caught, deported or killed. In Berlin alone, 5,000 to 10,000 Jews survived in hiding. This would not have been possible without the help of non-Jews.

Yad Vashem ultimately honored the German farmers in “Saviors of the Night.” Spiegel is now 97 years old and is the only survivor in her family.

“Saviors in the Night” challenges the many simplistic notions about good and evil, public and private behavior under conditions of extreme terror, and the impossible choices and self-discoveries that arise from wrestling with moral dilemmas. If nothing else, the film places those who purport to be innocent bystanders in the harshest spotlight of all.