The Greening of Art 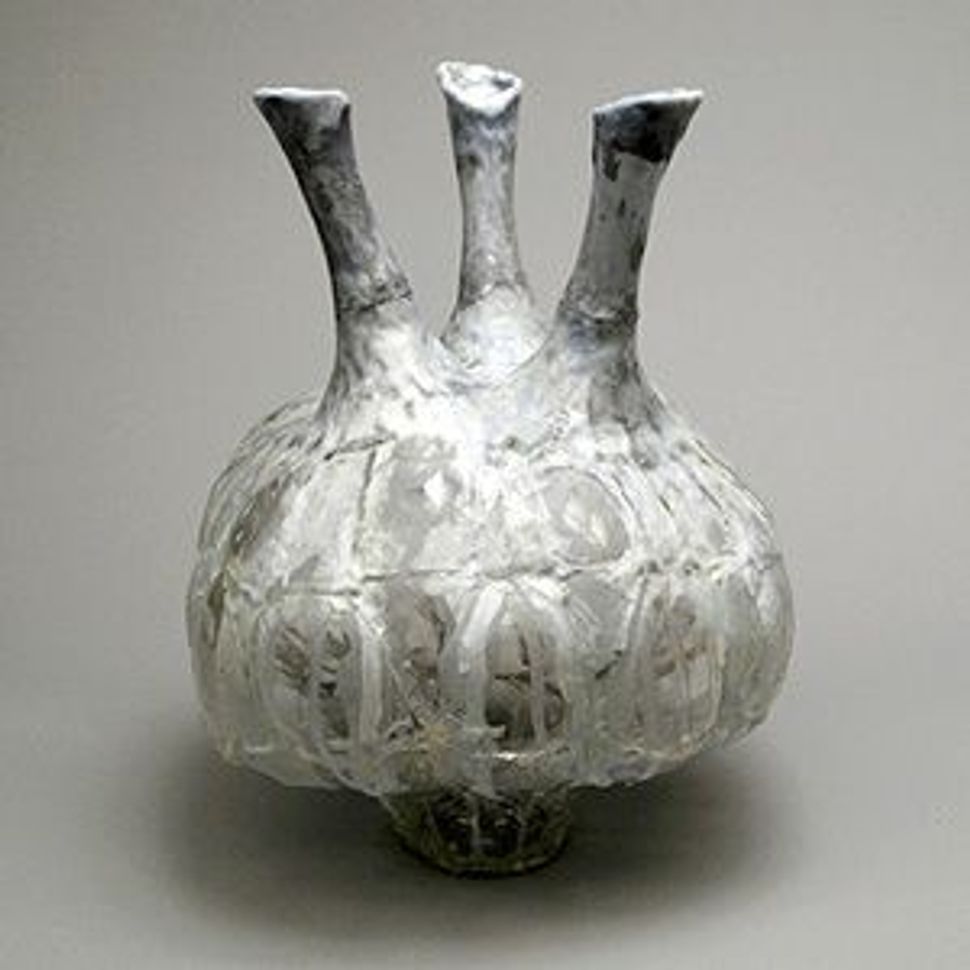 Arty and Environmental: ?Vessel With 3 Spouts? (2009), a vase made of discarded plastic, paint and acrylic polymer by Shari Mendelson. Image by SHARI MENDELSON 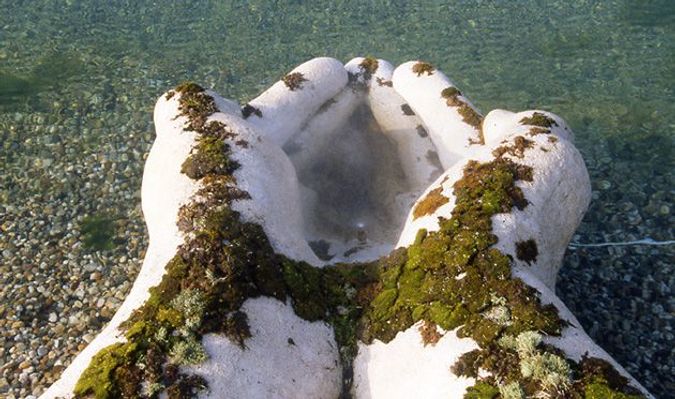 Waste Management: ?Gift of Water? by eco-artist Jackie Brookner is a liv- ing sculpture that helps clean the air and filter water. Image by JACKIE BROOKNER

Global warming, energy shortages, the fragility of the natural world — these issues are no longer relegated to the fringes of culture. Jewish “eco-artists,” as they are called, have increasingly stepped into activist roles to provoke people’s thinking about the environment. 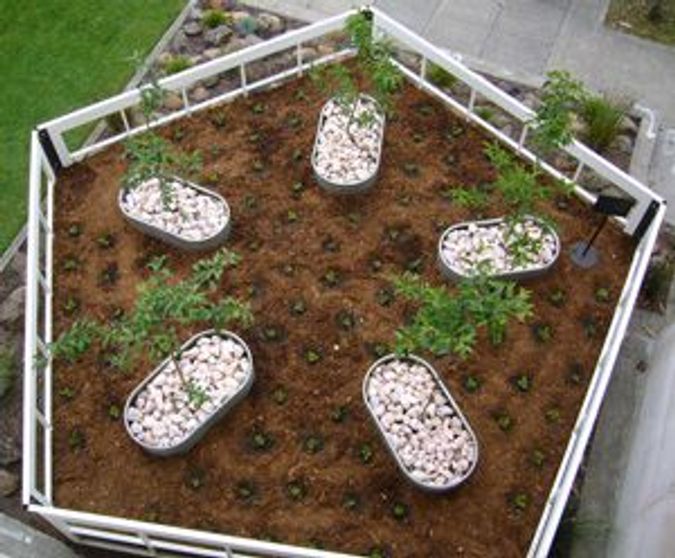 “I’m very conscious of living during an age of excess,” says New York eco-artist Ilene Sunshine, “and I abhor waste and its consequences. I see my work as a form of creative problem-solving.”

Sunshine says that her interest in environmental art stems partly from the concept of tikkun olam, “an ongoing repair and transformation of the world,” and partly from stories her mother told of rationing during World War II. “[She] made it sound exciting to find ways to make things last,” Sunshine says.

In 1996, Sunshine stumbled upon unlikely art-making material when she snapped off the tip of a discarded Christmas tree and combined it with pine cones and plastic tubing to create a sculpture. Soon she was dragging more trees off the street, cutting them up and recombining the part — a practice she has continued every January.

Of course, there’s an element of subversive irony in a Jewish artist appropriating tossed-out Christmas trees, but as Sunshine says, “Art facilitates new ways of seeing.”

Last spring, Sunshine and 10 other Jewish eco-artists took part in a contemporary group show in Seattle called Tikkunim: Jewish Roots/Ecological Art. Among the artists was Shari Mendelson, who has lived in Williamsburg, Brooklyn, since 1986. 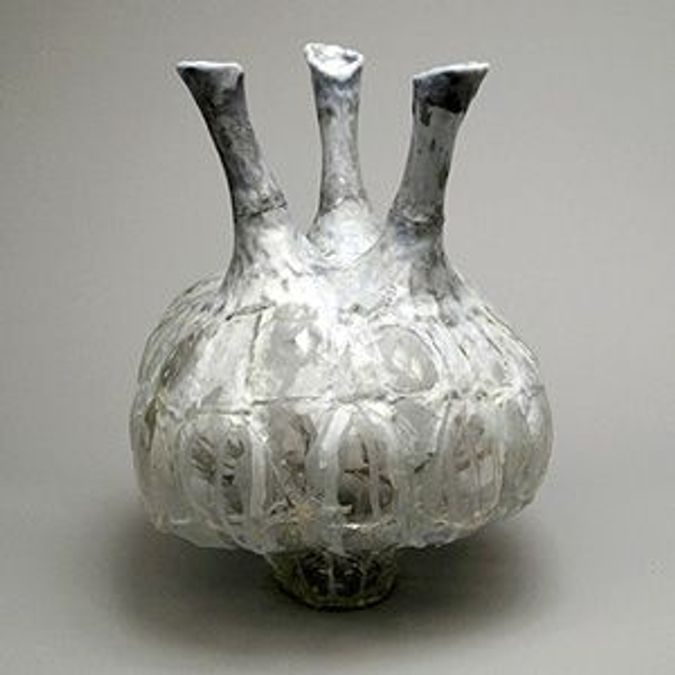 Arty and Environmental: ?Vessel With 3 Spouts? (2009), a vase made of discarded plastic, paint and acrylic polymer by Shari Mendelson. Image by SHARI MENDELSON

Having spent a year on a kibbutz between high school and college, Mendelson came to appreciate the ancient sites and history of Israel, and says that she has a “visceral relationship” to the past. “The Jewish belief that we are to make the most of this life in the present, as opposed to the afterlife, enforces my need to question our impact on the planet,” she says.

Tamar Benzikry-Stern, curator of Tikkunim, says, “Judaism is as much about being moral, ethical and having an activist relationship with the world as being spiritual or religious.”

For example, Mendelson builds vessels such as pitchers and vases from recycled water, soda and juice bottles—thus transforming plastic into striking sculptures as a response to a hyper-disposable, wasteful culture. She acquires her materials by raiding neighborhood recycling bins.

“Being a naturally shy, private person, I find digging in people’s trash the hardest part of the work,” she says. Luckily, Mendelson’s friends and family collect and save plastic bottles for her, too.

The eco-art movement is catching on. Currently at the Peninsula Jewish Community Center in Foster City, Calif., is the exhibit called Jewish Environmental Artists of the Bay Area, showcasing Jewish artists for whom the environment plays a central role — including Rebekah Goldstein, whose paintings and drawings express the tension in our interactions with the natural world, and Rachelle Cohen, who manipulates maps in part to raise concerns of climate change and political borders.

Notions of stewardship and nurturing are essential to environmental artists.

Curator Benzikry-Stern says that ecology is being grappled with in “very thoughtful and revelatory ways,” and that “green” art has the power to serve as a call to action.

She argues that some eco-art not only provokes seeing and thinking, but can “physically stop or reverse environmental damage.”

New York artist Jackie Brookner is a fine example. She has collaborated with ecologists, biologists, earth scientists and landscape architects to design organic works that restore the environment. “Prima Lingua,” one of her renowned “biosculptures” (living sculptures), has been described by the artist as “a monstrously large tongue that licks the polluted water in which it stands. The mosses, liverworts and other plants that live on the surface are a fascinating microcosm that help clean air as well as filter the water.”

Brookner has a current project in Finland, “Veden Taika,” which consists of three floating islands that provide nesting sites for birds and plant vegetation specially chosen to remove pollutants from water and sediments. Wind-powered aerators oxygenate the water, as well. Her art cultivates and enhances the natural world, and even reverses man-made harm.

Another artist, Susan Leibovitz Steinman of Berkeley, Calif., has devoted herself to reclaiming neglected public land for the past 20 years. In Palo Alto, she transformed a median strip into a native wild grass meadow. And her “Beneath Land & Water” project in Kentucky was cited by a critic as one of the 10 best art projects of the past decade. Collaborating with two artists in the heart of Appalachia, Steinman designed an “art and culture” walk, where visitors can view murals as well as a native plant park that absorbs and cleans storm water runoff before it enters a local river. She has also created community gardens that offer sites of beauty, solace and sustenance in neglected neighborhoods.

Pioneering eco-artist Mierle Laderman Ukeles similarly engages in major public projects. Since 1977, she has been the official artist-in-residence for New York City’s Department of Sanitation, where she explores the social and ecological aspects of waste management. She was also commissioned to develop a project in Staten Island’s Fresh Kills Park, formerly the largest municipal landfill in the world.

Her work is being shown in a Yeshiva University Museum group exhibition in New York, In the Beginning (which runs through February 28), in which artists reinterpret the first chapter of Genesis.

Ukeles’s installation at Yeshiva was inspired by kabbalistic interpretations of the Genesis story. She asks visitors to help “complete” the artwork by offering their agreement (in writing) to perform a personal act of tikkun olam. “We have been given the utter responsibility to take care of this magnificent world,” says Ukeles. “And we have the power to repair and to heal that which is broken and shattered.”

There is no question that for so many eco-artists, Judaism is inextricably linked to issues of sustainability, and the idea of persevering through arduous circumstances to provide for future generations.

“I was raised with the Jewish sense of responsibility to community and the world, and the connectedness of ideas and actions,” says Steinman. “I have the habit of describing my projects as related to the Hanukkah miracle: We never have enough materials, but somehow light is created.”

Carmela Ciuraru writes about art and books for the Los Angeles Times and Newsday, among other publications. She lives in Brooklyn.

The Greening of Art