Enrollment Up at Community Day Schools 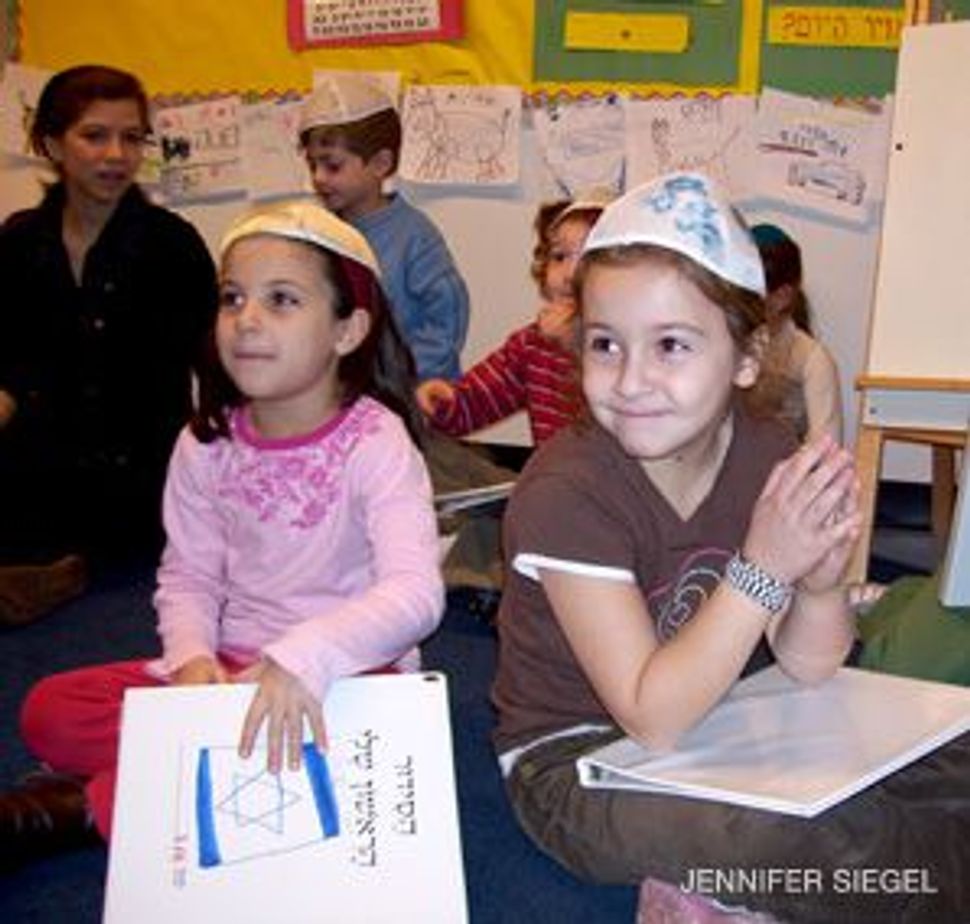 All Together Now: At the Hannah Senesh Community Day School in Brooklyn, first graders begin the day with prayers, led by a music teacher playing guitar.

By her own admission, Laurie Minsk was initially “very skeptical” about sending her two children to a Jewish day school. A Seattle resident who had grown up attending the city’s excellent public schools, Minsk, 48, worried about academic rigor and about whether an all-day Jewish school would mesh with her family’s Reform lifestyle. 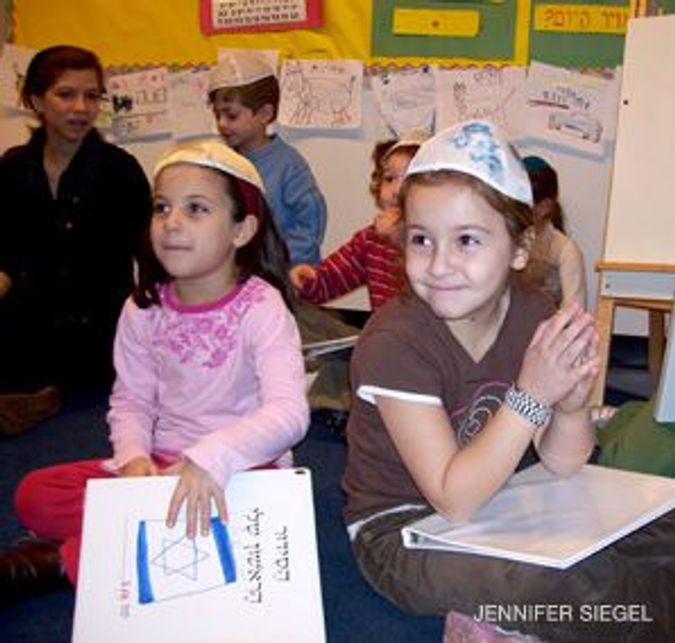 All Together Now: At the Hannah Senesh Community Day School in Brooklyn, first graders begin the day with prayers, led by a music teacher playing guitar.

But as a compromise with her husband — who grew up in a Conservative home and attended an Orthodox day school in Harrisburg, Pa. — Minsk ultimately settled on the Jewish Day School of Metropolitan Seattle, a pluralistic community day school. Today, Minsk serves as president of the school’s governing board, and she says she couldn’t be happier with the choice she made for her daughter, 14, and son, 11.

“I’m much, much, much more committed to Jewish education now,” Minsk said in an interview with the Forward. “Community day schools create these kids who are excited to know about who they are and proud of who they are… and in Seattle, you don’t just walk down the streets and feel Jewish.”

Unlike other Jewish day schools, community schools aren’t affiliated with any specific stream of Judaism, and they accept children from across the religious spectrum. These schools provide a mix of secular and Judaic studies, with courses on Jewish history and culture and on biblical interpretation, along with egalitarian prayer and intensive Hebrew instruction. While the Jewish studies curriculum is rigorous — generally accounting for 40% to 50% of class time — community schools tend to put less emphasis on imparting the particulars of ritual observance than do day schools associated with the Orthodox and Conservative movements.

Experts say that the success of the community model has been fueled by both pragmatic and ideological reasons.

“The philosophy is, ‘We want to be together; we need to be together,’” said Marc Kramer, executive director of Ravsak, which is a not-for-profit network for Jewish community day schools. Since the 1990s, new community schools have opened as complements to existing day school options in cities including New York, Los Angeles and Boston. They have also opened in more than a dozen smaller communities — including Phoenix; Austin, Texas, and Alexandria, Va. — that turned to the community model as an effective method of pooling resources.

According to the Avi Chai Foundation, 20 Jewish community day schools opened between 1998 and 2003, while enrollment rose 17% to more than 15,000 students nationwide. While the number of students is still small compared with those of Orthodox day schools, which enroll more than 200,000 students, the community schools’ growth rate outpaced their Orthodox counterparts, except for schools associated with Hasidic movements. Enrollment at Orthodox schools in total grew by 12% between 1998 and 2003, while enrollment at Modern Orthodox schools rose by roughly 6%. Over the same period, enrollment at schools affiliated with the Conservative Solomon Schechter day school movement rose by nearly 1% but has declined slightly in more recent years.

On a recent Thursday morning at Brooklyn’s Hannah Senesh Community Day School, a class of first graders began their day with a boisterous tefilah, or prayer, session accompanied by a music teacher with a guitar. The children, holding binders full of colorful pages they are creating as they learn new prayers, marched enthusiastically and performed a stripped-down version of a traditional hakafah, the Torah procession that occurs before a reading. Upstairs, middle-school students attended Hebrew-immersion classes conducted without a word of English. Down the hall, seventh graders in Chumash, or bible study, worked through the translation of a passage and then carried on a lively discussion about that passage’s relation to a saying from Hillel: “In a place where there are no people, try to be a person.”

Founded in 1995 by several families belonging to a nearby Conservative congregation, the Hannah Senesh school (named for the famed World War II resistance fighter who perished trying to rescue Jews from Hungary) is now in its first full year in a permanent home in the heart of brownstone Brooklyn. While 30% to 40% of its students — from kindergarten through eighth grade — are from Conservative homes, the school embraces families from across the religious spectrum, as well as the children of intermarried families and of gay and lesbian parents.

“Anyone who declares they are families raising Jewish children” is accepted here, said the school’s principal, Susan Weintrob, explaining the school’s ethos of inclusiveness. “We don’t ask how they are Jewish.”

In Weintrob’s view, part of the beauty of a community school is that children can be open about the religious practices within their homes and pursue Jewish learning within a non-judgmental environment. During one class discussion, a Hannah Senesh second grader volunteered that his ideal conception of manna would be “ham and eggs,” and another student pointed out that the dish was not kosher. The teacher said, “You’re right,” and then moved on. Weintrob recalled: “There’s no evaluation made here.”

Both parents and administrators said that a robust embrace of diversity is a major strength of community day schools.

“[My children were taught that] we’re all Jewish, and people at home do different things,” said Alisa Doctoroff, 49, who has two teenagers currently attending Manhattan’s Abraham Joshua Heschel School, as well as a 20-year-old son who was a member of the school’s first graduating class. “They weren’t labeled, and I think they grew up understanding that Jewish families have chosen to practice their Judaism in many different ways and that it’s important to respect them — and to also make sure that people are comfortable in your home.”

If pluralism presents educators with unique challenges — both in terms of formulating curriculum and prayer services within community schools and accommodating a lack of clear community norms — the proponents of community day schools say it is more than worth it.

In Seattle, Laurie Minsk’s 11-year-old son has begun thinking about whether the Jewish liturgy reflects the current state of his beliefs — a spiritual grappling of which she is proud.

“He knows what the prayers are, what they say, and he’s making knowledgeable decisions about his religion,” Minsk said.

Enrollment Up at Community Day Schools