A New Life for ‘Lifelong Learning’ 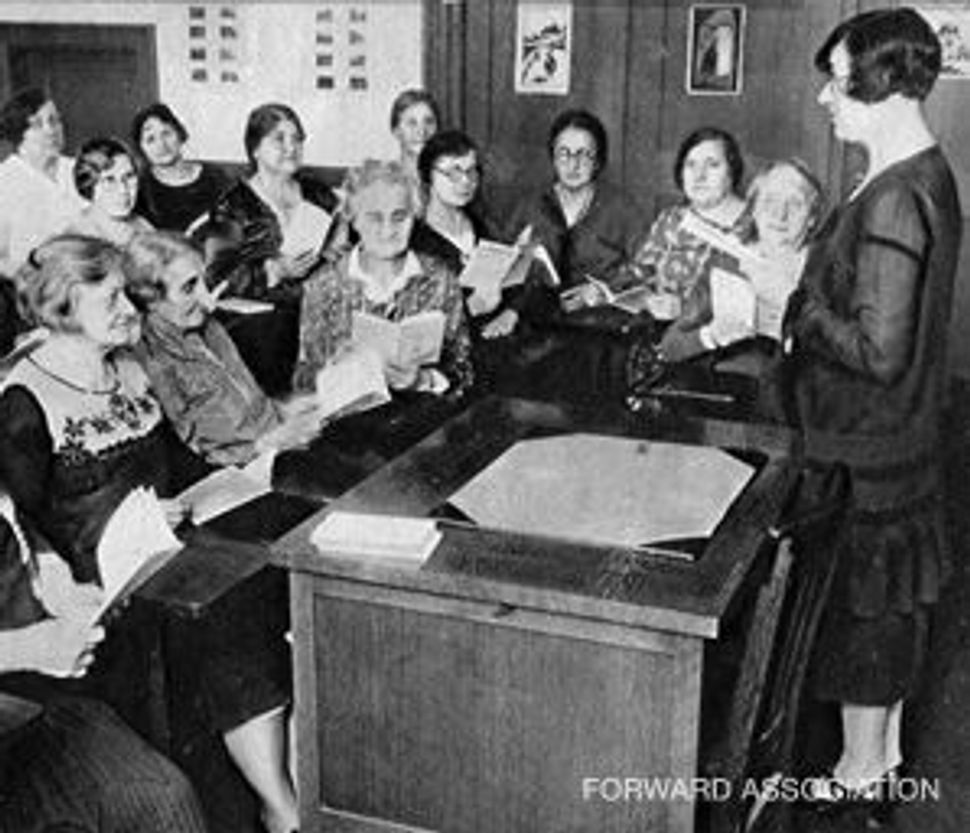 Model Students: This picture of Jewish women learning English at the National Council appeared in the Yiddish Forvertz with a caption that read, 'It's Never Too Late to Learn.'

American Jews are often taken to task for their sins, for their indulgent appetites, dwindling attendance at synagogue and the rising rate of intermarriages. But look again. Here, there and everywhere throughout the nation, American Jews are burying their noses in books and burning the midnight oil: Adult education or, as its current iteration would have it, “lifelong learning,” is sweeping the community. In what has got to be one of the most startling — and successful — cultural initiatives in quite some time, American Jewish grownups in droves are taking classes in the Torah and the Talmud, medieval Jewish history and Israeli affairs. 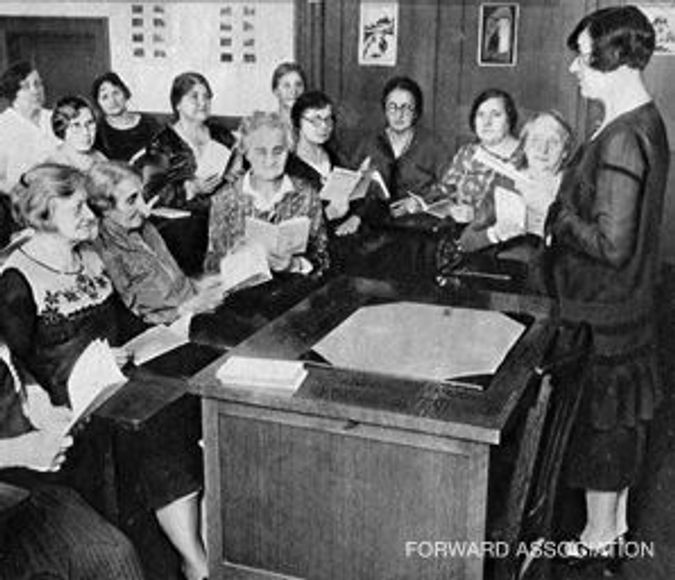 Model Students: This picture of Jewish women learning English at the National Council appeared in the Yiddish Forvertz with a caption that read, 'It's Never Too Late to Learn.'

Many of these classes are offered by local synagogues and neighborhood Jewish community centers; by Jewish women’s groups like Women’s League for Conservative Judaism, and by nondenominational organizations like Me’ah, which, since 1994, has set its sights on fashioning a national audience committed to 100 hours of study over the course of two years. With more than 800 current “adult learners” and several thousand alumni from Greater New York-New Jersey area, Boston, Philadelphia and Baltimore, Me’ah engenders “sophisticated conversation with the core texts” of Jewish history and thought. (In the interests of full disclosure, I have the good fortune to be on the faculty of Me’ah, where, for several years now, my Monday nights are given over to consistently satisfying and spirited exchanges with the well-educated, intellectually curious laity that typically constitutes the Me’ah student body.)

Jewish adult education, of course, is nothing new. Back in the 1890s, the Jewish Chautauqua Society sponsored a national network of reading circles for which it also published syllabi on the Bible and Jewish history. Especially effective in those areas of the country where Jews — and synagogues — were in short supply, the society, related its president, George W. Ochs, in 1906 carried a “message, like a benediction, into thousands of homes.” Once a year, participants had the opportunity to gather together in Atlantic City, N.J., for “summer assemblies.” Part reunion, part intensive study, these events featured a dizzying round of classes and public addresses from some of the country’s most luminous personalities. One year, Jewish Chautauquans heard from Columbia University professor Richard Gottheil, who delivered an illustrated lecture on Palestine; another year, they heard from Theodore Roosevelt, who praised American Jewry’s industry and its devotion to the nation.

The School of the Jewish Woman, which was located in Manhattan at 251 West 100th Street, was yet another fascinating foray into adult Jewish education. Established in 1933 by the redoubtable Trude Weiss-Rosmarin, one of the great unsung heroines of American Jewish life, and sponsored by Hadassah, it sought “to give Jewish knowledge to Jewish women and girls and to prepare them for a better and more intelligent understanding of Jewish life — past as well as present.”

Toward that end, the School of the Jewish Woman offered classes in Hebrew, Bible, Talmud and the “Customs and Ceremonies” of the Jews, a course intended to make sense of the “perplexing” rituals that characterized Jewish life. Jewish history was also a major part of the curriculum. Weiss-Rosmarin, who held a doctorate in Assyriology from the University of Würzburg, felt strongly that the study of history was the “best remedy against indifference and the surest way to build up Jewish pride and self-respect.”

After a falling-out with Hadassah — “I’m not such an angel when it comes to dealing with organizations,” Weiss-Rosmarin explained — the school closed its doors in 1939. Weiss-Rosmarin would then spend the next 40 years at the helm of The Jewish Spectator, making the case in print, as she had in the schoolroom, for the “poetry and passion” of Jewish culture.

An even older model for American Jewish adult education was rooted in the great explosion of learning set off by our immigrant forbears: night school. Determined to make a go of it in the New World, our grandparents or great-grandparents trudged wearily after work to the local public school or settlement house, where they learned how to speak English and “cook American,” how to practice modern forms of sanitation and how to “play bank.”

To those inclined to doubt the possibility of integrating the immigrant into the body politic (then, as now, there were many such doubting Thomases), the night school offered the most effective rejoinder. “Surely nothing can be more inspiring to the public-spirited citizen, nothing worthier of the interest of the student of immigration, than the sight of a gray-haired tailor, a patriarch in appearance, coming after a hard day’s work at a sweatshop, to spell ‘cat, mat, rat,’ and to grapple with the difficulties of ‘th’ and ‘w,’” Abraham Cahan observed as early as 1898, bursting with pride at the “spectacle.”

A New Life for ‘Lifelong Learning’