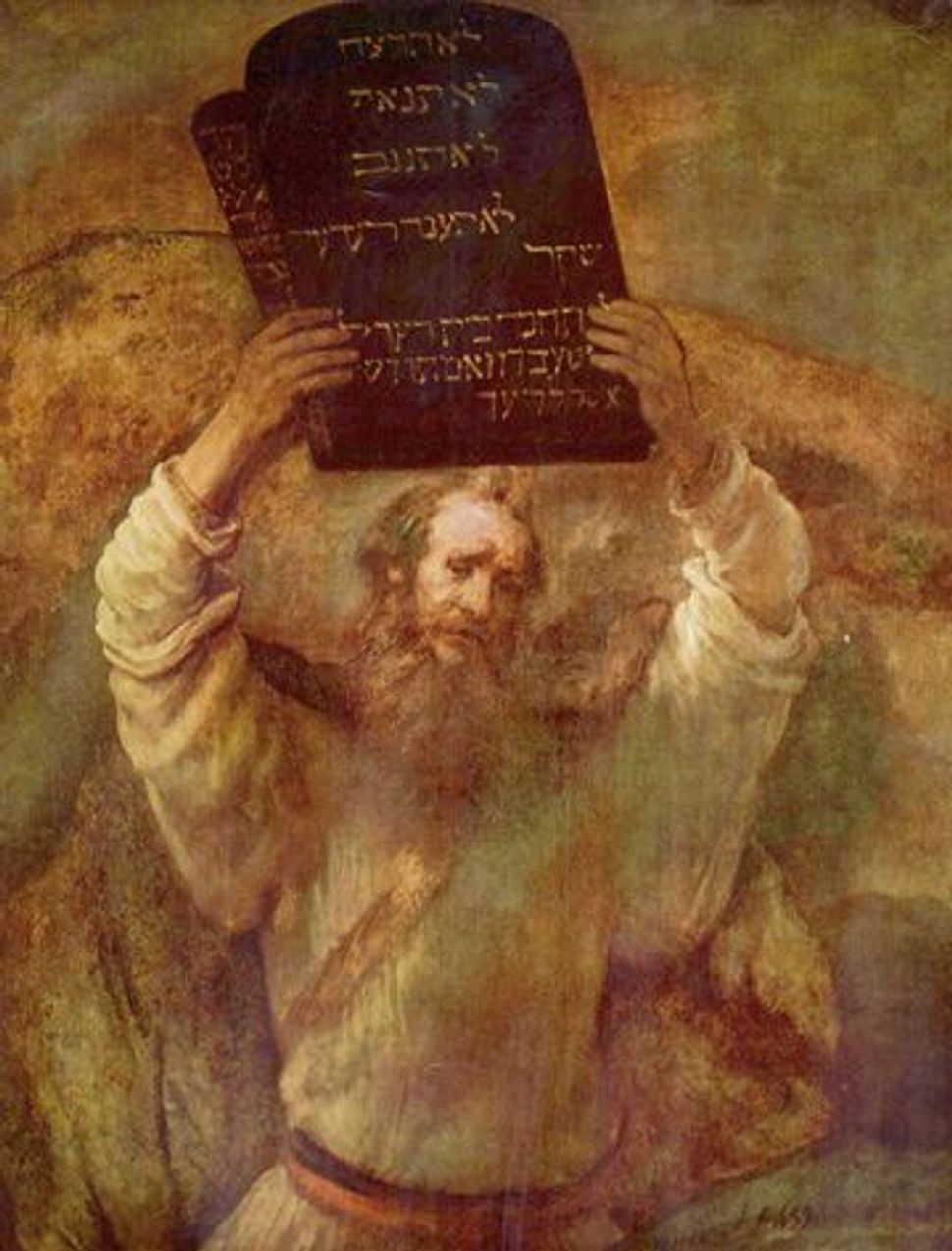 Image by ?MOSES AND THE TABLETS OF THE LAW,? REMBRANDT VAN RIJN (1659)

For a columnist, there’s no such thing as a bad reaction. Agreement feels good, of course, but disagreement is better than apathy, and bitter disagreement means, at the very least, that one’s managed to say something. Thus, over the past few months, I’ve relished the opportunity to engage with smart critiques of my opinions on Israel, spirituality, authenticity and other subjects, and have been gratified by the seriousness with which these conversations have proceeded. 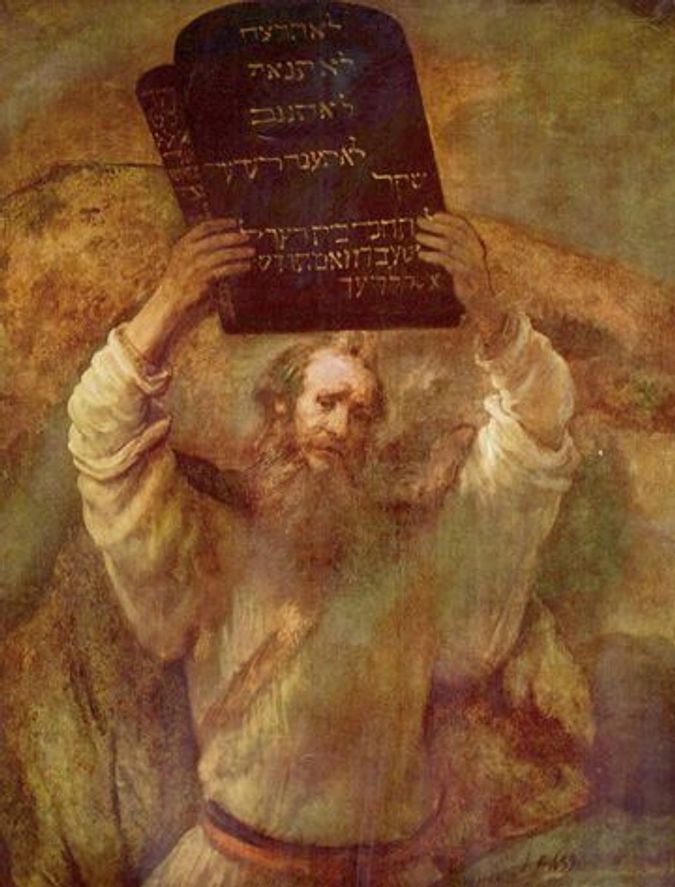 Image by ?MOSES AND THE TABLETS OF THE LAW,? REMBRANDT VAN RIJN (1659)

But then there are the angry ones, comments and letters filled with invective, superlatives and rage. This is hardly unique to the Forward, of course: Much of the phenomenon is just due to technology — the immediacy and anonymity of the “Comment” feature on the Internet encourages one to respond in the heat of the moment, and with as much fire as possible. Personally, I can take it. But some of it, and the worst of it, is a distinctively religious, perhaps distinctively Jewish form of indignation, which clothes incivility in the pious garb of religion.

The process is simple. Justify your temper tantrum in Jewish values, and suddenly it becomes valid. Our rage is righteous, backed up by ancient values, and in defense of Very Important Things. Pettiness dresses itself up in pseudo-piety, and religion becomes little more than a cover for infantile behavior.

Now, most of us would agree that we shouldn’t sweat the small stuff. But I want to make a stronger claim: that even when there is a viable religious pretext, getting angry is a personal failing, not a religious value. Some people believe that anger is a good product of religion. But I think it’s something religion is meant to fix.

At this juncture, I could provide an array of proof-texts supporting my position that anger is a bad thing. The Talmud compares anger to idolatry. Even God practices anger management. The ways of Torah are the ways of peace. And so on. But I want to be up-front that the Jewish tradition is schizophrenic on this point. What about the story of Pinchas, who kills an interfaith couple on the spot? Or Moses killing an Egyptian overseer in a fit of rage? Or heroic stories of Jewish resistance and activism, from Masada to Warsaw to Jerry Rubin and Abbie Hoffman? After all, “Turn the other cheek” is Christianity, not Judaism.

Clearly, both calm and indignation are valued within the Jewish tradition and, indeed, within all religions. Yes, Jesus said to turn the other cheek, but he also said he came with a sword — an image not lost on generations of sword-bearing Crusaders, inquisitors and bigots. Yes, Islam means “the way of submission,” but the Quran also includes passages about killing infidels. Religions reflect the diversity of their adherents, and contain within them messages of both violence and peace, both anger and quiescence. Religions value both.

Moreover, while some would say that religions evolve on this point, that is a selective reading of history. Zealotry is no less with us today than it was a millennium ago, and while we may no longer behead and impale, we as a species detonate and fulminate as never before. Indeed, like many, I’ve often wondered whether the good in religion outweighs the bad. I am convinced that religion can be a source of compassion, and can inspire us to calm the fires of hatred. But it is also plainly obvious that religion also encourages tightness, clinging, ethnocentrism, fear, guilt and defensiveness, and coats all of them with a patina of the holy. And there’s no question that religion is often used as a cover for nationalism, sexism, homophobia, anti-rationalism and ignorance in general.

So, rather than pretend that my view is the authentic Jewish one (a favorite claim of the indignant), I want to make a substantive case against indignation: I want to argue that anger is a problem rather than a solution, that curbing anger is connected to the essential values of Judaism and that, I think, doing so is needed to save the world.

Last point first: Indignation is bad for the world. Can one really believe that more righteous indignation is needed today? Indignation is generally about being fixed upon particulars: this value, this land, this idea. Such fixity hardens the heart, freezes the mind. It does indeed provide a sense of solidity and security: Amid ever-shifting circumstances, you know where you stand. But while these ideals may have been valuable once upon a time, when Israelites were an embattled minority, or when Jews were threatened with persecution and extinction, they are counterproductive today. To live together in a globalized, pluralistic, multicultural world, we need less turf possessiveness and less defensiveness — not more. Righteous indignation has outlived its usefulness.

Second, it’s simply not the case that getting more irate about something — even if that something is religion, Israel, or injustice — will help solve the problem. Motivation and moral indignation may be allies, of course, and we should take stands, be politically active and articulate our beliefs. But anger? It may indeed play well on Fox News, but anger exacerbates, rather than ameliorates, discord and division. It makes it difficult to make prudent, rational policy choices. It vulgarizes, excites and distracts.

We know this from our own lives. I don’t know about you, but when I’m angry, I make the stupidest choices of my life. They feel right in the moment, and I can talk myself back into “the moment” by re-angering myself over and over again. But they tend not to hold up in the light of calm reflection. The same goes for decisions made on communal, national or international scales.

Third, in addition to being harmful to cooperation and unhelpful in focusing the moral conscience, indignation is a personal spiritual failing. It’s undignified, and should be beneath us as civilized human beings. Of course, this is not the case in our community. I’ve been amazed visiting the offices, synagogues and even homes of many highly regarded people and organizations in the past few years, to see what they put up with in terms of anger, gossip and backbiting. I’ve been in law firms where millionaire partners rant and rave like children. And I have to say, from the perspective of someone who grew up seeing a lot of anger, who has worked for years on my own anger with some success — these people are emotional infants. I know that their number includes some of our richest and most powerful leaders. But to me, being led by the psychological and spiritual equivalents of 98-pound weaklings shows a failure of communal values.

No matter how much rage is dressed up in religious rhetoric, it is a failure of religious consciousness. Whatever religion is, it’s not supposed to be an excuse for indulging our basest natures. Religion should inspire us to live up to our aspirations, not provide a convenient rationale for infantile rages. And the mere presence of a religious pretext does not justify incivility. People who rant are embarrassing.

I suspect they’re also in a great deal of pain. I know what it’s like to be angry all the time, because I used to be that way. And for me, religious and contemplative teachings are valuable precisely because they point the way out of that Egypt, that narrow place, into a space that is more accepting, spacious and loving. My Jewish practice is not about deifying anger; it’s about building the mental infrastructure to relax out of it. Judaism gives me tools: ritual, prayer, study, reflection, myth, food, the cycle of the year, connection to nature, meditation, spirituality and dozens more. The tradition tells me stories, reminds me that we are all humans in need of help, and inspires me to the side of the yetzer tov instead of the yetzer hara. Okay, anger arises; it happens. Now, what are you going to do about it?

Whereas, when religion is used simply to provide an exclamation point after our preference, it is indeed idolatry, replacing what is right with what I want. This is how it has to be, dammit! And I’m angry because it’s important! And that’s why being angry is good! This is the Moses who hits the rock instead of speaking to it, who smashes the tablets and who killed an Egyptian back in his youth. It is only human to feel this way sometimes. But I aspire to the Moses who sees the shadow of God and calls God gracious and compassionate, slow to anger and full of loving kindness.

I’m not there yet, by any means, but every tug in that direction is holy, and those in the opposite are not, even if they come arrayed in the garb of the pious.