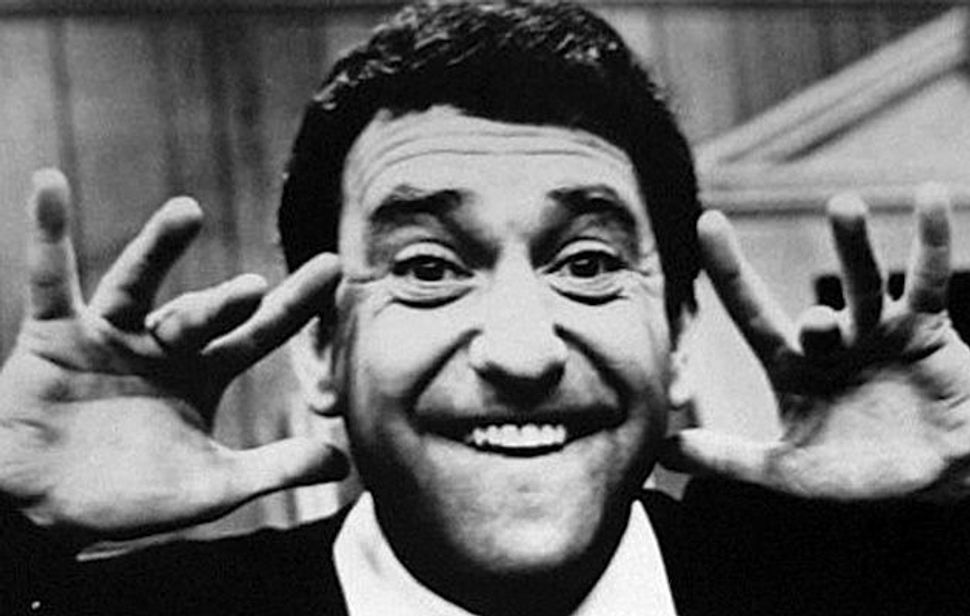 All Good Clean Fun: Soupy Sales does ?The Mouse? in one of his slapstick moment sans pies. Image by COURTESY OF MOVIE STAR NEWS

The other night, over dinner, I mentioned to a friend that I had to get home early to watch a documentary about Soupy Sales. My friend had no idea whom I was talking about, which made me feel a little sad. I guess I had believed that Sales was a timeless figure, a goofy, cultural touchstone from the age of live TV. Apparently I was mistaken.

A little background, then, for those younger than 40: Sales, who died last year at the age of 83, was a radio personality and children’s TV host with an almost 50-year career. Sales is best remembered by baby boomers for his “Lunch With Soupy Sales,” which began as a local TV show in Detroit in 1953. In the late ’50s, “Lunch With Soupy Sales” was based in Los Angeles and broadcast nationally; by the early ’60s, until its cancellation in 1966, the show was syndicated and based in New York City.

“Lunch With Soupy Sales” was an anarchic show, filled with Sales’s unashamed mugging and his corny jokes. His trademark shtick was a pie in the face — either his own or his guest’s. And these guests were no B-list mugs, but included show-biz luminaries like Frank Sinatra and Sammy Davis Jr. As well as celebrity guests Sales’s show was also known for recurring characters like the puppet Pookie the Lion, which cracked wise from the window, and White Fang, a dog that communicated in bizarre growls and remained off-screen, save for his giant paw.

Although the show was hugely popular with children, Sales, in his heyday, was a cult figure for adults, as well. My guess is that older fans loved the loose format and that Sales knew his jazz. (Sales also had a late-night show in Detroit in the ’50s, on which Billie Holiday, Charlie Parker and Miles Davis appeared.) Anyway, it’s not a stretch to see the influence of “Lunch With Soupy Sales” on later shows like “Pee-wee’s Playhouse,” which also had strange, if more knowing, characters appearing at the door or the window.

As a Gen Xer, I recall Sales from the “The New Soupy Sales Show,” which ran from 1978 to 1979, and from his appearances on game shows like “Hollywood Squares.” Sales’s later show was much the same as the former, save for the types of celebrities. I remember watching with astonishment as a gaunt Alice Cooper, in skintight leather, got a pie to the face, in which the custard was thick enough to obscure even his eye makeup.

That strange clip, as well as a very funny pie-throwing sketch with Sinatra, Sammy and Trini Lopez, can be seen again in the documentary “Soupy Sales: The Whole Gang Is Here” (released on DVD in 2006 which aired on April 24 on Long Island PBS, WLIW21).

The documentary, in fact, is composed almost entirely of clips. We don’t learn much about Sales’s life before show business, other than that he was born Milton Supman in 1926, that he grew up in West Virginia and that he served in the Navy “in the latter part of World War II.” Nor do we get much of Sales on himself, except that he was proud of receiving more than 20,000 pies to the face (a figure that strikes me as more believable than Wilt Chamberlain’s more famous estimate).

Some viewers may feel shortchanged by this biographical briskness. But the documentary does remind us that Sales’s career was not without incident. A recurring bit was when someone would knock at the door; Sales would open it, and the viewer would get a sight gag or a sketch with an unseen visitor. (An example: “My wife thinks she’s a broken phonograph.” “Why don’t you take her to a psychiatrist?” “Hey, that oughta change her tune!”) But once, in 1960, Sales opened the door to a topless stripper. Of course the woman wasn’t visible on TV, and Sales didn’t have a studio audience. But the crew reportedly got a big kick out of it.

In 1964, in a move that has gone down in the annals of TV legends, Sales told his younger viewers to find their parents’ wallets and send him “some of those green pieces of paper with those pictures of guys with beards on them.” Thousands of children did. All the money was returned; nevertheless, Sales was suspended from TV for a week.

In “Soupy Sales: The Whole Gang Is Here,” the clips are interspersed with interviews with TV historian Joe Varsalona and, to my own delight, “Uncle” Floyd Vivino, whose “The Uncle Floyd Show” was a mainstay of my childhood. (Perhaps my favorite celebrity sighting was when I spotted Vivino in his station wagon on the Jersey Turnpike.) Although I remember Sales with affection, I’m not sure if I share their level of enthusiasm. Varsalona describes Sales as “this crazy uncle hanging out with the kids,” which is fair enough. Floyd tells us that “Soupy could never be dated because he was fun. And fun never goes out of style,” which is also fair enough. But he should have stopped there: “Mark Twain goes out of style, but Soupy won’t,” Vivino continues.

Still, as I mentioned, I do find it sad that Sales is fading from our cultural memory. He never spoke down to the children in his audience, which lends even his earliest black-and-white shows a certain timelessness. And it occurred to me that, with his pies and pratfalls and hoary jokes, Sales brought some vaudeville deep into the 20th century. But these reflections came only after I finished watching “Soupy Sales: The Whole Gang Is Here.” While I watched, I was too busy laughing. And that’s all you need to know. Because I do agree with Uncle Floyd on a different point: “I think today, everybody analyzes everything. Too much, maybe.”