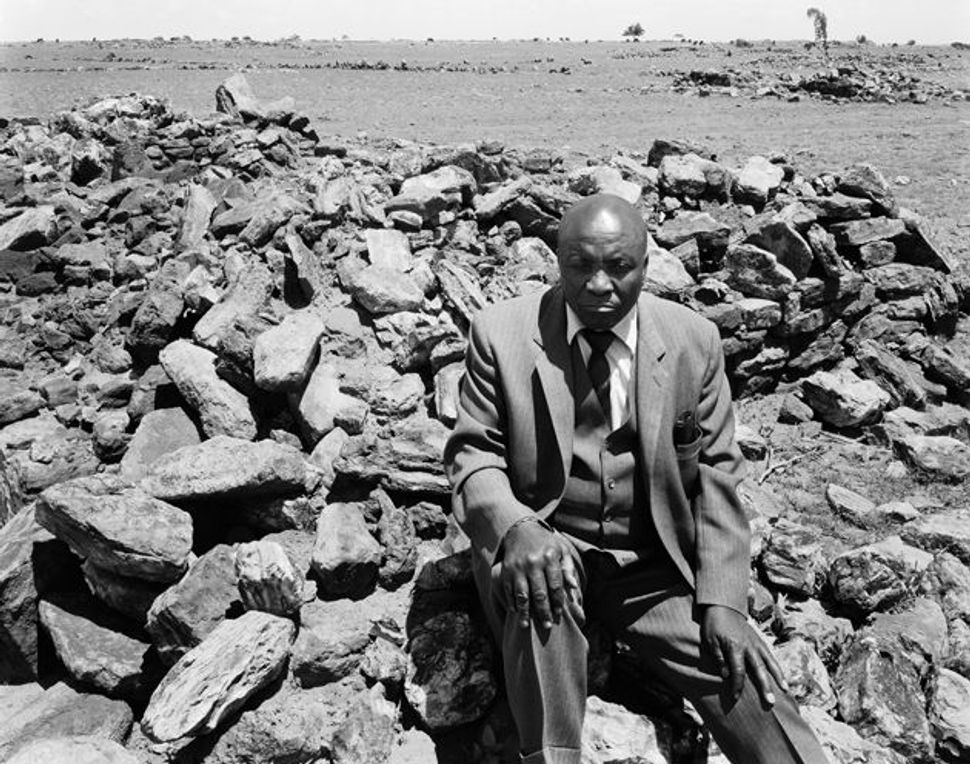 For more than half a century, South African photographer David Goldblatt has been probing the emotional core of his native land, capturing the human cost, and the haunting legacy, of apartheid.

The Jewish Museum’s new retrospective, “South African Photographs: David Goldblatt,” is the first major overview in New York of Goldblatt’s work in more than a decade. On view until September 19 are 150 black-and-white photographs, including images from the early days of institutionalized racial segregation in 1948 and those from postapartheid South Africa of the 1990s.

What marks Goldblatt’s oeuvre is the tension between indignation and empathy that is embedded in his most provocative photographs. Above all, Goldblatt’s camera reveals the inner contradictions and the sheer oppressive weight of life lived under the heart-coarsening structures of apartheid.

The youngest son of Eli and Olga Goldblatt — both of his parents, fleeing pogroms in Lithuania, immigrated to South Africa at the turn of the 20th century — Goldblatt, now 79, grew up in the small mining town of Randfontein, west of Johannesburg. There, his father ran an upscale clothing store that catered to the Afrikaner community. Goldblatt said that when he was a child, he experienced antisemitism from Afrikaners — some of whom, he said, were Nazi sympathizers. Growing up he witnessed the indignities of dispossession and displacement of the black South Africans who labored in the mines or as servants for Randfontein’s Afrikaner majority.

Unsettled by what he has described as “the life-denying miasma of Afrikaner nationalism,” Goldblatt rejected the middle-class life that running his father’s clothing business could have provided, in favor of an itinerant career in documentary photography. He later reflected that photography was his way of becoming politically active — a career path that, he said, enabled him “to square one’s conscience with being a white in this country.”

In Goldblatt’s best work his probing eye invites a radical alteration in a complacent viewer. “David’s photographs have an unstated political significance that goes before and grows beyond the obvious images,” said his friend Nadine Gordimer, a South African political activist and Nobel laureate. “He can ring a sudden life never seen or suspected before from what he sees.”

In this respect, Goldblatt’s most unsettling images document, with stunning emotional and aesthetic effect, a notorious history of South African “crime scenes”: sites of violence and dispossession sanctioned by apartheid. His work stirs a nation’s uncomfortable, repressed memories.

The uproar that followed the 1975 publication of his photo essay “Some Afrikaners Photographed” (Struik Publishers) reveals the telling anxiety that Goldblatt’s images can produce. Following the book’s release, Afrikaners accused Goldblatt of portraying them in purposefully unflattering ways.

Many of Goldblatt’s most iconic images are on display at the Jewish Museum. Among them is the image of a now leveled area near Cape Town known as District Six, once home to a multicultural population of blacks, Jews and people of mixed race, people whose homes, schools and workplaces were razed by the government to make room for whites-only housing. Here’s the irony: The government never rebuilt the area, so it remains a wasteland.

Evidence of violence can also be seen in the long white arm casts and unbent stare of a young boy fixing his convicting gaze on us in “Fifteen year old Lawrence Matjee after his assault and detention by the Security Police, 25 October 1985.”

Goldblatt’s eye casts an ironic gaze upon his viewers. “I sought out irony,” he has said of his photographic strategy, “and tried to impregnate pictures with a sense of it, for it often revealed nuances and complexities of our life in South Africa.”

In one absurd image, a mother rests in bed while her child naps at her side. Everything seems normal and in place, but the four walls are missing, removed by the government. A suitcase is off to the left — a symbol, perhaps, of the provisional nature of life for black South Africans living under apartheid. Goldblatt tells us that as soon as the officials left, the woman began rebuilding the walls.

Or consider the image of a black woman and a white woman, members of the same Methodist church, sharing a blanket in the church’s chilly meeting room as they meet, in 1980, “to discuss ways of reducing racial, cultural and class barriers.” Reflecting on the image, Gordimer said, “Is the shared rug a beginning of real sharing to come?”

Or most poignantly, the 1964 image of a young white boy with his black nursemaid — her fingers instinctively wrapped around his heel in a protective, loving gesture, his hands gently placed on her shoulders. What crime is latent, or forecast, here? A half-century later, by Goldblatt’s estimation, the image reveals a tragic future of race relations, for this boy will inevitably grow up under severe taboos on racial mixing, a victim of the tangled legal apparatus of apartheid, discouraged from expressing his recollection of affection.

Since the mid-1990s, Goldblatt has continued to capture on film the layered histories of power, settlement and uprooting in South Africa. In the wake of apartheid’s end, he has focused on landscapes, churches and monuments, in stunning black-and-white clarity.

Most recently, though, he has turned to color photography, creating large, vibrant, exhilarating canvases of contemporary South Africa, where AIDS is prevalent, where enterprising black people hawk their services in freedom as they build their own new structures. The Jewish Museum retrospective does not, alas, include examples of Goldblatt’s color photography.

“I’ve found the venture into colour quite exciting,” he explained during an interview included in “Intersections Intersected,” a 2009 compilation of Goldblatt’s photography. “It has to do with the sense of liberation that came with post-apartheid South Africa.”

When the Forward asked Goldblatt about his hopes for the future, he confessed that he is now profoundly “angry”: angry about the state of education in the new South Africa, angry about the graft among government officials and angry about the fate of newly displaced migrants, as evidenced by the exhibition’s “Zimbabwean refugees given shelter in the Central Methodist Church, March 2009.” He is, above all, angry about the rampant crime that permeates contemporary South Africa. Goldblatt speaks of his desire to begin taking black-and-white photos of convicted criminals forced to return to the scene of their crimes. In the act of revisiting recent crime scenes, postapartheid South Africa will, perhaps, achieve an altered historical and moral consciousness that the country’s social and cultural renovation requires.

“In all of the work I have done,” Goldblatt has reflected,“I have been engaged with the consequences of our actions and of our values.”

Donald Weber is the Lucia, Ruth, and Elizabeth MacGregor professor of English at Mount Holyoke College.