Not Drowning But Waving 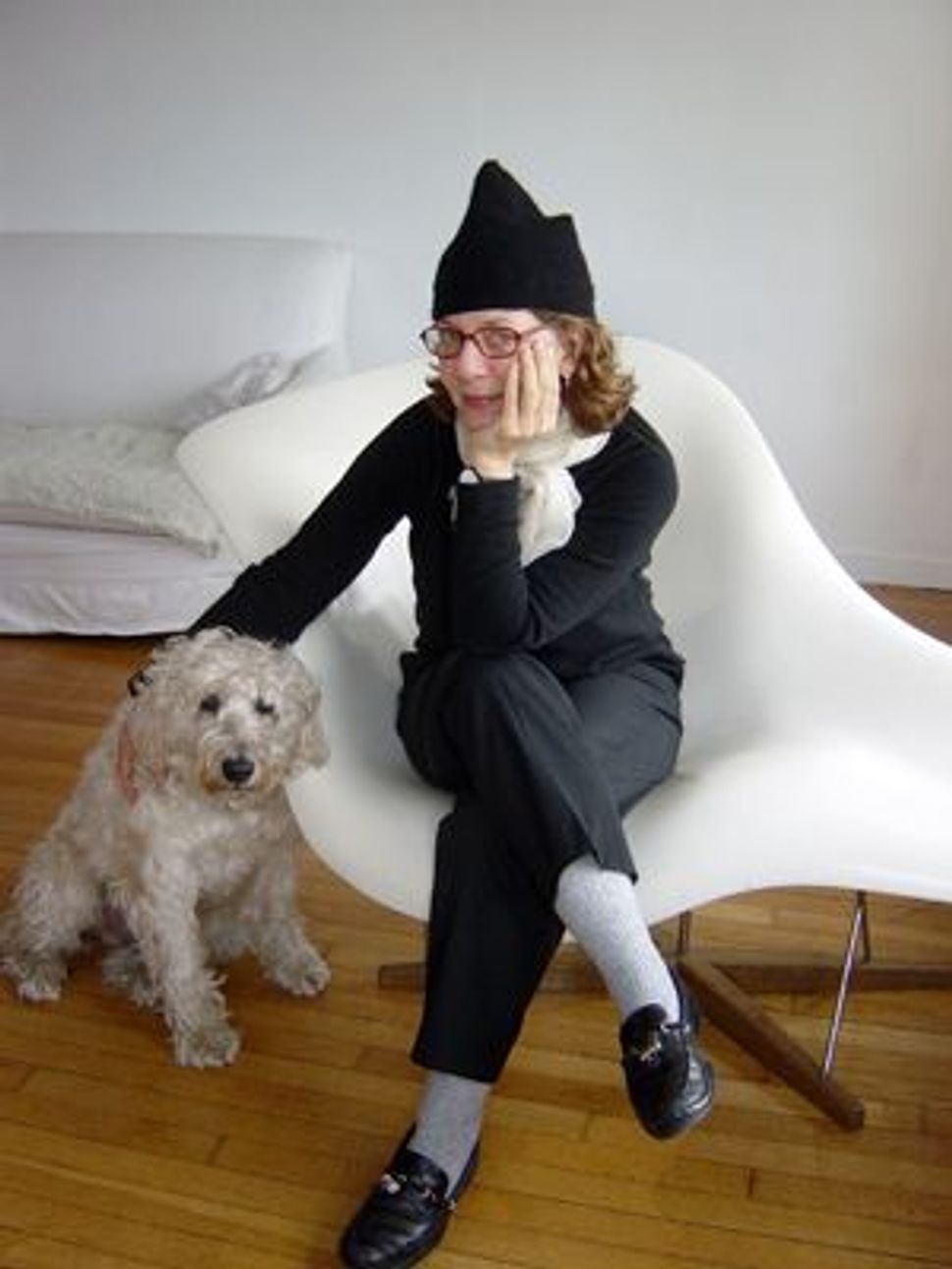 Just Me And My Dog: Maira Kalman and friend, possibly a model for her 1999 New Yorker cover, ?Dog Reads Book.? Image by MAIRA KALMAN AND JULIE SAUL GALLERY, NEW YORK

Painting whimsies for glossy magazines may be no great cultural achievement, but neither is it proof against more profound investigation. Illustrator and designer Maira Kalman is a sterling example of how an artist can do both.

A major touring exhibition, “Maira Kalman: Various Illuminations (of a Crazy World),” is at Philadelphia’s Institute of Contemporary Art, where it runs until June 6. The exhibition then travels to the Contemporary Jewish Museum, San Francisco; Skirball Cultural Center, Los Angeles, and, next spring, to the Jewish Museum, New York. Although a few of the “illuminations” on view are “crazy” in the sense of daffy or zany, many others soberly point to the derangements born of deep historical and cultural grief. 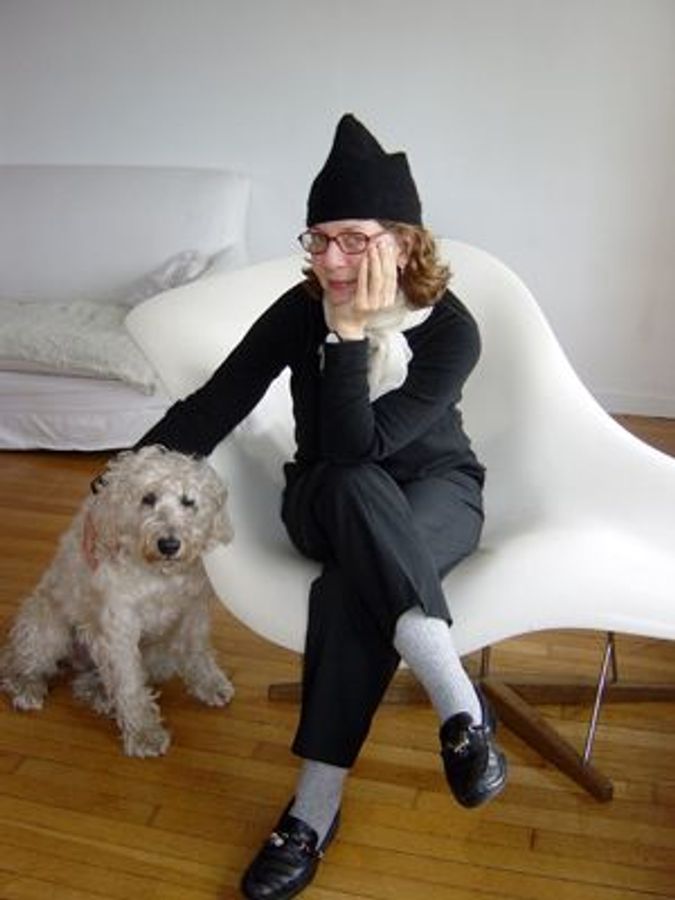 Just Me And My Dog: Maira Kalman and friend, possibly a model for her 1999 New Yorker cover, ?Dog Reads Book.? Image by MAIRA KALMAN AND JULIE SAUL GALLERY, NEW YORK

For Kalman is not just a cutesy amuser, although she has indeed been long acclaimed for her whimsical book illustrations, like last year’s “The Principles of Uncertainty” and 2005’s “The Elements of Style,” both from Penguin, and the forthcoming “13 Words” by Lemony Snicket (HarperCollins).

The surface humor of Kalman’s images for her New York Times blog should not make viewers think that this is necessarily her best, or most profound work. Kalman has also delved into depictions of Jewish cultural/historical icons, as a larger exploration of Jewish identity. As we see from the beautifully reproduced images in the lavish exhibition catalog, the artist’s interest in such themes began early. In a 1978 drawing with pencil, colored pencil and ink on paper, “The Guzelofkowitzes Visit Daughter Veronica Guzé (Know Your Roots),” a tiny Jewish couple faces their fabulously fashionable, huge daughter in Capri pants who towers over them, cigarette holder in hand. The artist’s line is casual, like early David Hockney, and as caricatural as drawings by the winsome British poet and artist Stevie Smith. Kalman’s images are more graphically sophisticated than Smith’s, but both artists share a disarming metaphysical perspective, asking essential questions about human beings.

Smith’s most loved poem is entitled “Not Waving but Drowning,” whereas Kalman’s artistic identity may be more accurately described as “Not Drowning, but Waving.” What at first glance seems playful, turns out to be tragic in Smith’s poem; what at first glance seems playful in Kalman’s art turns out to be both playful and tragic. As Saul Steinberg’s, Kalman’s works often allude to metaphysical questions, although in a more literal way than did the elusive Steinberg.

Clearly the loss of Kalman’s husband, the groundbreaking graphics designer Tibor Kalman, who died of non-Hodgkin lymphoma at age 49 in 1999, has focused her attention on mortal matters. Even before this tragic loss, Kalman, according to the exhibit catalog, began every day by reading newspaper obituaries, explaining herself in this way: “Well life is short and … being reminded of that every morning grounds me. Or gives me something kind of larger than life beginning — with my cup of coffee.” Beyond this “very emotional way to begin the day,” as Kalman terms it, she describes in public lectures and interviews that her art is a way of learning “how to live and how to die.” (She adds, to deflate the Tolstoyan gravity of these goals, that her life is also occupied with having “some snacks and yelling at my children.”) After the 9/11 attacks, she told another interviewer that her mind was on “Nazi Germany. I think these thoughts every single day of my life. Why? Because my father survived the Holocaust and his family did not.”

By understanding the memento mori that hovers over Kalman’s whimsy, we can see the 2008 gouache on paper “Broken Chair in Tel Aviv” as more than just a study of a piece of furniture. Barely held together with red string, Kalman’s chair is an image of tenuous balance and fragile cohesion, prone to disintegration after too much wear and tear. It might be seen as a metaphor for Israeli society, in the context of childhood memories of Tel Aviv, which Kalman describes this way in her personal annotations to a formal chronology presented in the exhibit catalog: “Sunny. Sandy. The fluttering awnings of seaside cafés.” Amid social and historical disarray, other Kalman images seem to suggest that culture can provide a means of reassurance. A 2007 gouache on paper, “London Blitz,” shows Londoners scrounging around shelves in a bookstore with Gilbert & George-like aplomb, disregarding the bomb damage from Luftwaffe planes a few centimeters away. As if the books themselves are the civilization that the war is intended to save.

Books are a main focus for Kalman, whose 2007 gouache on paper, “Walter Benjamin,” is more than just the portrait of a philosopher driven to suicide by fear of Nazi capture. Benjamin, author of the 1935-36 essay “The Work of Art in the Age of Its Technological Reproducibility,” (available in a handy 2008 paperback from Harvard University Press) makes explicit the social and political underpinnings of widely reproduced art. For an artist like Kalman, whose work is so often seen online or in the pages of magazines and newspapers with vast circulations, Benjamin’s explanation of the political content of such art is a crucial key to her own context.

Kalman is not only drawn to his philosophy, but also to Benjamin himself, a curiously endearing mix of devout Marxism and personal quiddities, ranging from collecting books and toys to sampling hashish, as well as setting a serio-comic precedent as a whimsical, yet highly serious, creative spirit.

This insistence on frivolity amid high seriousness extends to some of the artists whom Kalman often says she admires, like the cartoonist William Steig, probably more for his psychologically informed illustrations, like the images created for the psychiatrist Wilhelm Reich’s anti-fascist 1946 polemic “Listen Little Man,” than for his now overfamiliar Shrek; or the German Jewish artist Charlotte Salomon, whose light-hearted portraits contrast violently with her ultimate fate as a Holocaust victim. Combining a light and tragic tone in a similar way, Kalman depicted the Supreme Court Justice Ruth Bader Ginsburg in two 2009 gouaches on paper included in the exhibit. One shows Justice Ginsburg, who has bravely battled cancer, seated on a sofa. The subject’s short black hair and dancer’s thinness create an image of idealized chic, not unlike the veteran French dancer Zizi Jeanmaire. As Kalman readily reveals, Ginsburg had her judicial robe tailored in Paris (the robe in question is the subject of a second gouache). This determined quest for surface elegance lightens the grim life-and-death domain of Supreme Court decisions, just as Kalman’s airy works are a defiant reply to her daily morning memento mori.

Scrawled in Kalman’s handwriting on one wall of the current exhibit is a quotation from a letter by Marcel Proust to a hostess of a party from the night before, in which he announces that he has forgotten his cane, but by the time he has finished the letter, he adds: “I just found my cane.” In Kalman’s work, what is lost, whether deceased loved ones or the ruins of history, may not be lost after all. And what is found is key to what makes her popular but also to what makes her significant. Glossy magazine whimsy may at first attract visitors to this revealing exhibition, but its serious content will be what Kalman’s fans will take away from it.

Not Drowning But Waving