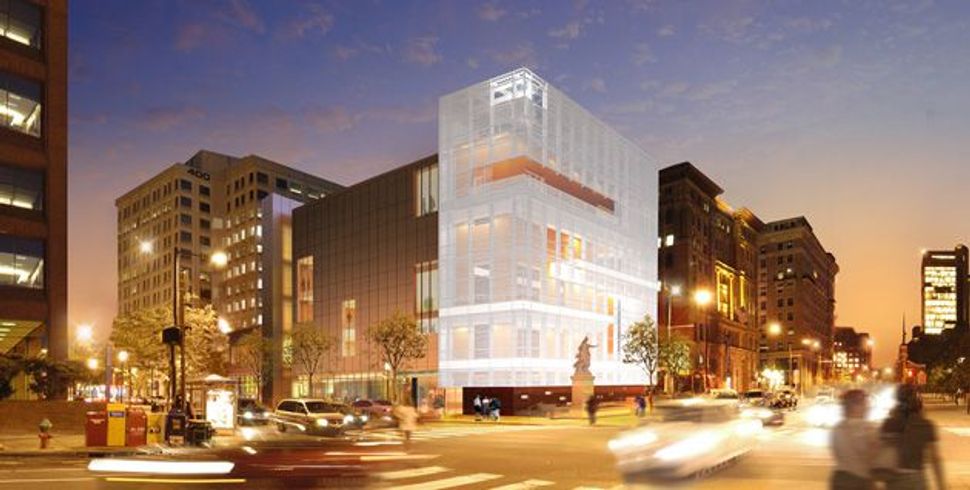 Light Sometimes: An impres- sive addition to Philadelphia?s Independence Mall, the new museum?s eternal LED flame will probably not be visible in daylight. Image by CoUrTESY oF NMAJH

Answer: when it houses Philadelphia’s new National Museum of American Jewish History. Scheduled to open in November, the museum is dominated by a massive glass facade and does not, at first glance, appear that different from other modernist glass and steel edifices in the United States. But looking behind the museum’s glass “veil” reveals a host of fascinating and often competing symbolic meanings that testify to the complexities of contemporary American Jewish life.

Designed by the New York firm of Polshek Partnership Architects, the museum is located on Independence Mall, in the heart of historic Philadelphia. This location makes a powerful statement that American Jews have finally arrived on the main American stage. Ironically, however, the message symbolically conveyed by the museum’s glass facade is far less clear.

The first thing one notes about the building’s architecture is that it does not strive to appear “Jewish” in any way. In contrast to most synagogues, the NMAJH displays no Jewish religious iconography. It also refrains from employing the destabilized deconstructivist forms that Daniel Libeskind has used to great effect in the Jewish Museums of Berlin and San Francisco.

Instead of communicating a message of identity, the NMAJH’s high-tech design is mostly intent on solving a set of functional tasks by using the formal vocabulary of the modernist movement. Indeed, the museum does not look appreciably different from Polshek Partnership’s most recent high-profile project: the glass and steel Newseum, in Washington D.C., which opened in 2007.

At the same time, however, the NMAJH’s form displays Jewish traits. In a paradoxical sense, the museum’s abstract facade can be seen as embodying the “Jewish” principle of universalism. As firm founder James Polshek put it in a 2008 Architectural Record interview, the facade was “purposefully unadorned so as to attract visitors who are interested in experiencing how America’s promise of freedom shaped the evolution of one cultural group, rather than a specifically Jewish audience.” It was also in keeping with the museum’s stated mission of “[educating] Jews and non-Jews alike about how Jews used the opportunities of freedom to make diverse contributions to American life.” In short, the museum’s architecture shows how modern Jews’ embrace of universal ideals — in this context, freedom — paved the way for their assimilation, integration and ultimate success.

Yet, despite its positive universalistic symbolism, the museum’s architecture cannot help but allude to some of the more ambiguous and even tragic elements of the modern Jewish experience.

This ambiguity becomes clear when one looks at the museum’s other main volume: a terra cotta clad structure that stands behind the glass facade and houses the bulk of the museum’s exhibit. This structure relates contextually to the red-stone-clad Philadelphia Bourse Building next door, completed in 1895, and thus architecturally testifies to American Jews’ readiness to fit into their environment.

At the same time, however, there are signs of hesitation. On a June press tour of the NMAJH, partner-in-charge Joseph Fleischer intriguingly described the glass facade in front of the terra cotta structure as a veil, raising an obvious question: If the museum’s creation represents American Jews’ self-confident moment of arrival, why the need to hide? A desire to communicate a bride’s sense of modesty? A reluctance to arrive too ostentatiously?

Further questions are raised by Polshek’s description of the relationship between the glass and terra cotta structures. In 2008, he noted that the terra cotta structure symbolized “permanence and protection,” while the glass volume symbolized “impermanence and fragility.” Polshek’s interpretation altered the accepted modernist understanding of glass as a confident symbol of democratic openness. In its place, he offered a new political interpretation, declaring that “[the] amount of glass [used in the building] implies that one should not take for granted the freedoms supplied by a democracy.” 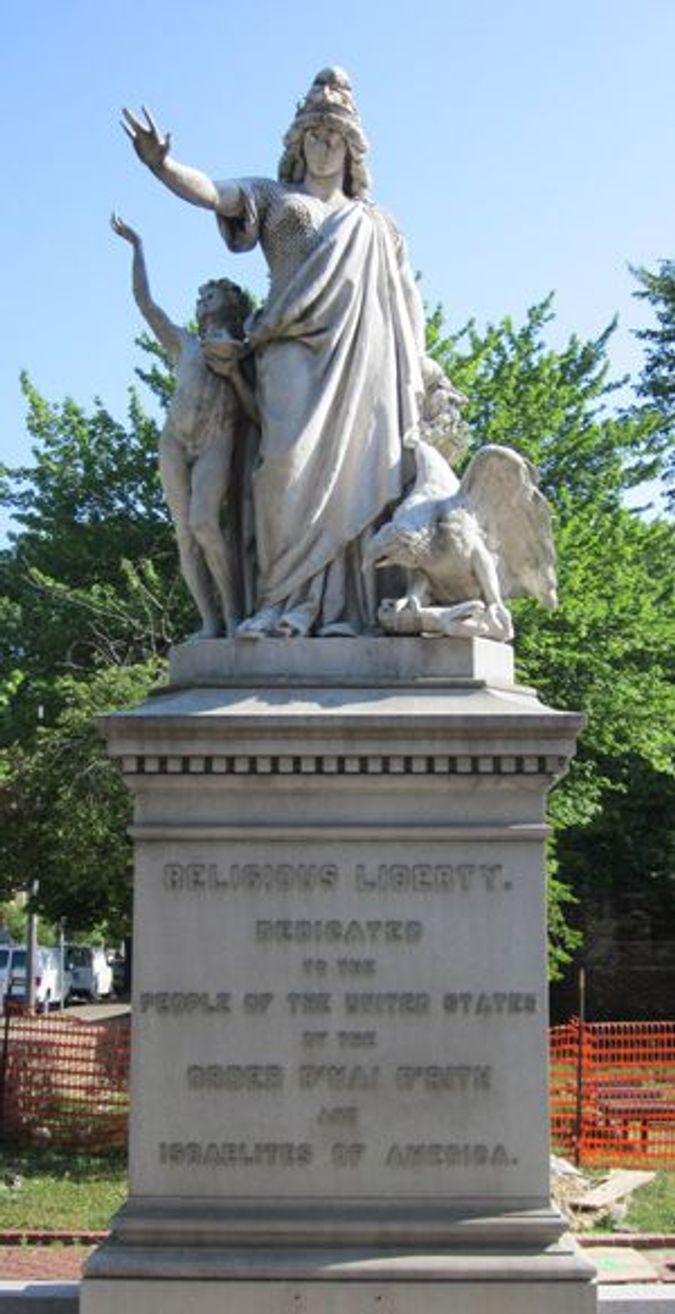 Insofar as this sobering admonition undercuts the museum’s otherwise buoyant message, it is worth asking what explains the injection of such a note of uncertainty. One possibility is the 9/11 attacks, which clearly underscored Islamist terrorism’s threat to Western democracy — just as the World Trade Center’s destruction highlighted the fragility of modern glass and steel architecture.

Another possible source of the building’s ambivalent symbolism, however, is the legacy of the Holocaust. The NMAJH is not a Holocaust museum and will not thematize the event prominently in its exhibit. Yet, as is true of Washington, D.C.’s United States Holocaust Memorial Museum, the Nazi genocide serves as an undeniable foil to the American Jewish experience.

Why else but for the Jewish experience under Nazism would one need to stress that glass symbolizes the “fragility of democracy”? Democracy has never been seriously threatened in the United States, yet democracy was threatened and ultimately destroyed in Germany. It is difficult, therefore, to read Polshek’s comment about the fragility of glass without thinking of Kristallnacht, the infamous Night of Broken Glass, for it was then that German Jews realized the fragility of their shop windows and of German democracy.

It is also worth noting that this is not the first time that Polshek employed glass in a project related to the Nazi era. His unrealized 1986 design for New York City’s Museum of Jewish Heritage — A Living Memorial to the Holocaust featured a massive memorial wing in the form of a glass cube containing six eternal flames. This plan may itself have been influenced by the famous New York City Holocaust Memorial proposal of 1966, created by Polshek’s one-time teacher at Yale, Louis I. Kahn, featuring six glass cubes.

Finally, the museum’s glass facade is connected to the Holocaust in the way it emphasizes the event’s status as a foil to the American Jewish experience. It is well known that the Holocaust museums of Washington and New York conclude their tragic exhibits by providing visitors with redemptive views of the present-day democratic world, embodied respectively in the national mall and the Statue of Liberty. The NMAJH employs this strategy, but with a twist: Instead of waiting until the exhibition’s conclusion, the museum’s glass facade provides a direct view of Independence Hall and the Liberty Bell from each floor. This proximity to the comforting icons of American democracy reassures visitors that America is not Europe.

Still, ambiguities remain. The museum’s most potentially distinctive feature is an “eternal light” located at the top corner of the glass facade. Until recently, most published renderings of the NMAJH described the light as “an 8-foot flame” and showed it flickering inside the museum. The light was likened to the Statue of Liberty’s torch of freedom, and touted as symbolizing the “continuity of the Jewish people.”

The most recent press release by the museum, however, announced a decision to replace the flame with an LED light sculpture, designed by media artist Ben Rubin. The reasons are unclear, but since it remains to be seen whether the sculpture’s “undulating forms” will be visible in the daytime, the building may be denied one of its distinctive elements, possibly weakening the message of Jewish “continuity.”

Finally, the NMAJH’s symbolic endorsement of liberty may be somewhat qualified by the imminent relocation of a historic monument in front of the building. Commissioned by B’nai B’rith International for the American Centennial of 1876, and designed by the American Jewish sculptor Sir Moses Jacob Ezekiel, the marble sculpture, “Religious Liberty,” is both an allegorical celebration of the separation between church and state and a clear endorsement of one of America’s founding ideals. At the same time, it can be seen as an insurance policy, its upright arm serving to ward off potential threats, such as those posed by the curtailment of religious and political freedoms.

The traumatic legacy of the Nazi period needs to be kept in mind if one wants to fully understand the American Jewish commitment to American values. While American Jews are grateful for the blessings of the United States, their historical experience in the modern era has taught them never to take these blessings for granted. It is this message — rooted in competing Jewish historical memories of European and American history — that is ultimately reflected in the NMAJH’s elegant glass facade.

Gavriel Rosenfeld is associate professor of history at Fairfield University. His book, “Building After Auschwitz: Jewish Architecture and Jewish Memory Since the Holocaust,” is forthcoming from Yale University Press.