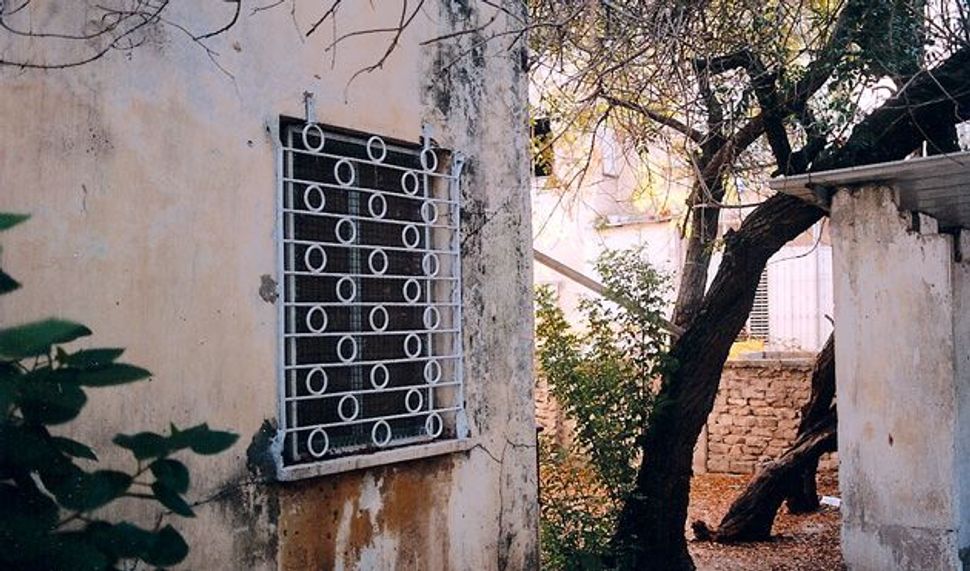 ‘Cameras are everywhere, especially in places where disasters suddenly erupt, creating the illusion that no catastrophe is left unphotographed,” Ariella Azoulay observed of “Untaken Photographs,” an exhibit she curated. “But regime-made disasters — which usually do not erupt suddenly, continue for some time and lack a spectacular visual dimension — tend to evade the archival filter, or to destroy it.”

Photography purporting to record catastrophic events should not be seen as a definitive record of what has taken place, Azoulay, a curator and documentary filmmaker, seems to suggest. At best, it is but a point along a continuum of events; it is for the viewer to resolve the question of, “What can be seen of regime-made disasters when cameras are not present to document them?”

“Untaken Photographs” is currently showing at the Tel Aviv gallery of Zochrot — an Israeli organization dedicated to promoting public engagement with the Palestinian narrative of the 1948 War of Independence — and is founded on the idea that accounts of political violence are inevitably determined and disseminated by the perpetrators of that violence.

While photography can sometimes offer an opportunity to challenge the orthodoxy of a flawed historical narrative, in this exhibition, the emphasis is on absent documentation. Photographs taken before and after the events inform a fuller understanding of what happened when cameras were either absent from the scene or unable to record a full account of what occurred.

The exhibit, which was awarded the 2010 Igor Zabel curator’s prize of the Ljubljana Museum of Modern Art, presents six photographic essays exploring the interpretive possibilities created by so-called untaken photographs. It includes landscape photography of Ayn al-Zaytun, a destroyed Palestinian village in northern Israel, by Miki Kratsman and Boaz Arad; reconstructions by the Israeli human rights organization B’Tselem of the use of torture by Israel’s security services before the practice was outlawed by the high court in 1999, and stark low-tech imagery of Jaffa by Aïm Deüelle Lüski, intended to articulate the “nonevent” of the Nakba.

Also on display are photographs by Dor Guez of the city of Lod, recalling the unacknowledged history of the once mixed city of al-Lydd, and Efrat Shalem’s photographs of unidentified suburban locations, distinguished by the bleak one-sentence descriptions of acts of violence — generally against women — committed there.

The unifying factor of the exhibition is not what the pictures themselves portray, but rather what they leave unsaid. As Kratsman and Arad explain in the exhibit’s catalog, “Our intention is not to take on the roles of historians and point out a conclusive truth, but to use photography to raise questions regarding the place and the event that are encompassed in silence. [We] leave it to the interested spectator to carry on the detective work and move back in time from the moment of the photograph.” This approach reminds the viewer that they, too, are a part of the photographic dialogue; they must take responsibility for excavating the context that formulates the picture.

This approach moves beyond the traditional emphasis on the aesthetics of photography, and is informed by arguments advanced by Azoulay, who also teaches visual culture and contemporary philosophy at Bar-Ilan University. In her book “The Civil Contract of Photography” (Zone Books, 2008), she argues that “the citizen of photography enjoys the right to see because she has a responsibility towards what she sees.” The observer is a party to the contract created by the photograph, and thus has as much a responsibility as the photographer or the subject to the truth, as represented by — and beyond — the photograph.

“The photograph is out there, an object in the world,” Azoulay writes. “Anyone, always (at least in principle), can pull at one of its threads and trace it in such a way as to reopen the image and renegotiate what it shows, possibly even completely overturning what was seen in it before.”

Azoulay argues that the exercise of this civic responsibility, as she formulates it, becomes meaningless if it acknowledges without comment what she describes as people with “impaired” citizenship — women, for instance, who suffer from an institutionalized “narrowed living space,” or the stateless Palestinian citizenry. In this sense, photography offers a challenge: to engage with the truth at which it hints, rather than to take it in, literally, at face value.

Some may hesitate to accept Azoulay’s principled approach to engagement with photography. In an otherwise positive review of “The Civil Contract of Photography” in Bookforum, for example, William T. Vollmann took issue with Azoulay’s acceptance of the description “photo rape,” which was appended to a photograph of Palestinian women sitting in the rubble of a demolished house by Israeli artist Michal Heiman. This, he argued, was a mean-spirited interpretation of the news photographer’s role in cataloging disaster and misfortune.

Vollmann’s misgivings aside, however, it is hard to challenge the underlying principle: One cannot observe photography passively when it presents — or hints at — images of tragedy and violence. And in “Untaken Photographs,” Azoulay makes passivity practically impossible.

Akin Ajayi is a freelance writer based in Tel Aviv. He contributes to The Jerusalem Post, The Times Literary Supplement and other publications.