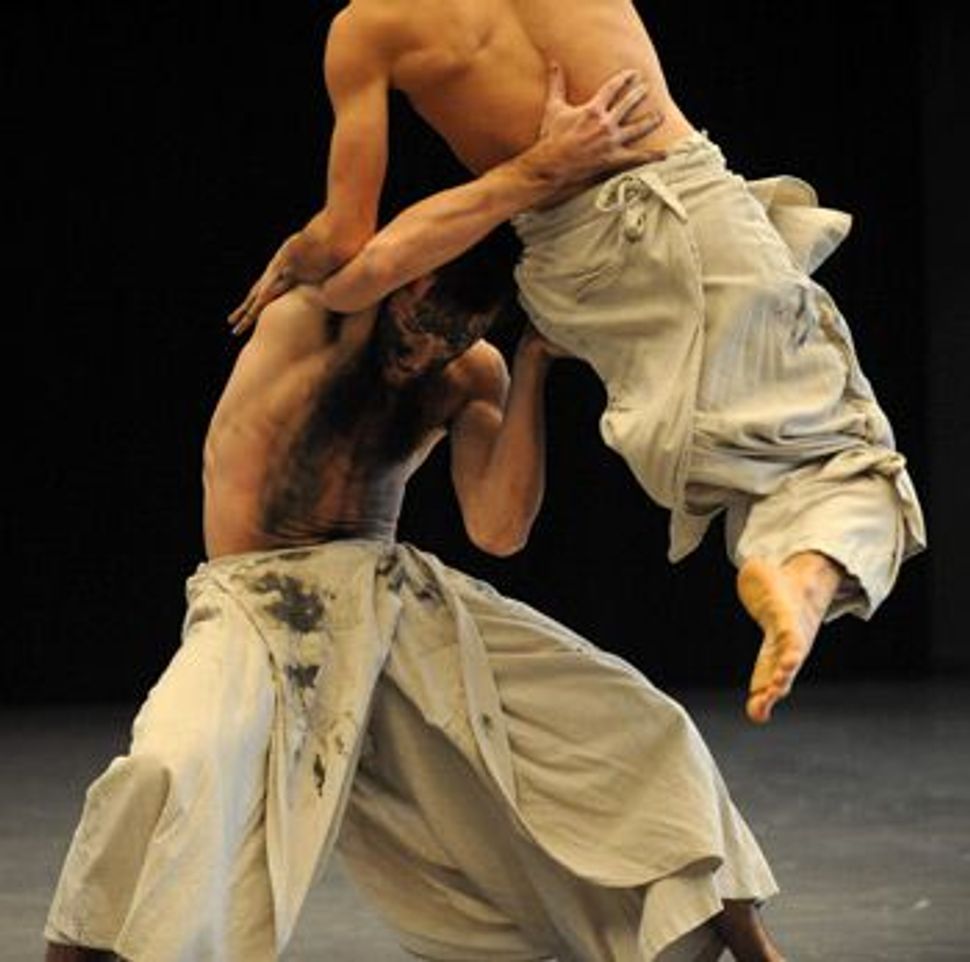 But on a recent evening, audience members had to make it past a cacophonous demonstration outside. The protesters’ chants, accompanied by drums, cymbals and a flute, were part of Adalah-NY: The New York Campaign for the Boycott of Israel, whose demands include the so-called right of return for Palestinian refugees.

The demonstrators repeatedly castigated “Brand Israel,” and seemed particularly incensed by the fact that the Israeli government funds Batsheva (they are, apparently, unaware that government support of the arts is typical of European and social-democratic states). One demonstrator, who identified himself only as Rosza, enthusiastically said the Batsheva tour was “part of the Brand Israel campaign to make Israel prettier. It’s essentially exactly what the CIA did in the ’50s, ’60s and ’70s in sponsoring artists like Louis Armstrong.” Unsurprising, one demonstrator carried a Palestinian flag; more surprising was the man who held an American one. “America stands for human rights, the rule of law, the overthrow of imperialism,” said Alfred R. Greve of New York. “America should be supporting the Palestinian people. Israel is now more a fascist regime than a democratic one.”

In the theater lobby, reactions to the demonstration included “disgusted,” “appalled” and “surprised.” One theatergoer proposed that the demonstrators “shouldn’t be allowed here: This is a theater.” Others took a more expansive, even relaxed view of the demonstration (and of the First Amendment). “I’m glad to see it,” said Carl Steeg, a New York doctor, with a wry smile. “It shows how free we are; it’s very American. But the demonstrators have no understanding of what the Israeli-Palestinian conflict is all about.” He added, “If they tried a demonstration like this in Gaza — ‘Palestinians against Hamas’ — I don’t think it would go too well.”

Ana Freiberg, who was born in Argentina, immigrated to Israel and now lives in New York, said: “Ohad [Naharin, the troupe’s artistic director] is so pro-peace, this is a joke. But no, I’m not surprised.” Bruce Williams, another theatergoer, said that he actually agreed with the demonstrators: “I support boycotting Israel; it’s really obscene what they’re doing to the Palestinians.” Why, then, are you here? “I support the artists — and the art,” he said.

Did the demonstration affect the audience’s thunderous ovation, complete with whistles and shouts, at the end of the evening’s performance? Did it prompt a desire to cheer artists who are under attack? Perhaps. But the truth is, the dancers — on September 22, an all-female cast performing the New York premiere of Naharin’s “Project 5” — looked, quite simply, terrific. Batsheva’s women eschew both the wan fragility of ballet dancers and the clunky, self-conscious “ordinariness” of some modern troupes.

Bare-legged and barefooted, and wearing short, stretchy black dresses, the Batsheva women were strong, compact, lithe, graceful and sexy. They are trained in Naharin’s own movement technique — unfortunately named “gaga” — which emphasizes power, speed, agility, and the ability to stop on a dime. But the dancers have also clearly incorporated more traditional styles, including those of Martha Graham (an artistic adviser to the original company) and of classical ballet. Their footwork is precise; their carriage, regal; their flexibility, astonishing.

Choreographically, the evening was a mixed success. “Project 5” features five dancers in four separate pieces, which Naharin has excerpted from his previous works. The first, “George & Zalman,” explored the structural similarities between movement and poetry. As sentences from a Charles Bukowski poem — including “… and if you can’t f—k , copulate” and “Make money but don’t work too hard” — were repeated over music by minimalist composer Arvo Pärt, dance phrase upon dance phrase accumulated. The five women danced sometimes in unison, sometimes against each other, but they were always closely connected. Often they would explode into bursts of short, furious movements, sometimes loudly slapping themselves on their lower abdomens, and then freeze. One repeated position — arms slightly curved and stretched overhead — suggested a kind of muted anguish, as if the women were beseeching heaven. But the absurdist Bukowski phrases prevented this compelling piece from taking itself too seriously.

The second work, “B/olero,” consists of two performers dancing to a synthesized version of the overly famous Ravel tune. The dancers were slinky yet emotionless; the choreography emphasizes abrupt changes of position, isolation of the pelvis and mesmerizing, almost mechanistic arm swivels. The piece can be read as an ironic comment on traditional ideas of sexiness, but the irony doesn’t kill the enjoyment; indeed, “B/olero” is a lot of fun. Still, it’s impossible for anyone to choreograph to this overused music without entering into the realm of kitsch, though I suspect that doesn’t bother Naharin in the least.Less successful was the next dance, “Park,” in which three women — under the kind of scary, garish lighting that we associate with German Expressionist drama of the 1920s — perform harsh, jerky movements to harsh electronic music. What a relief when it ended.

The last piece, and the most cryptic, was “Black Milk” — a reference, I assume, to Paul Celan’s 1947 “Death Fugue,” considered by many to be the greatest of Holocaust poems. Thankfully, though, this is not a literalistic dance “about” the Holocaust. 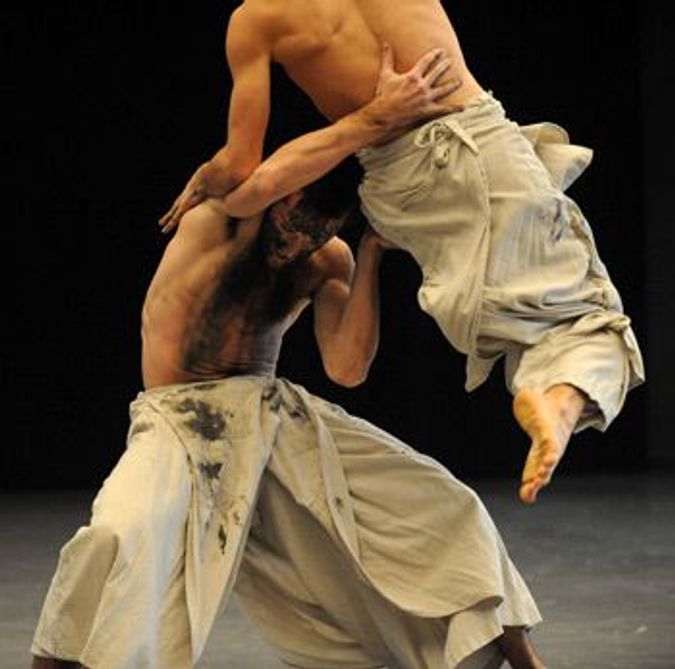 The five women, dressed in long, loose, cream-colored silk pantaloon-skirts and bandeau tops, evoke a chorus of Greek maidens. A bucket is passed from woman to woman — each looks at her forerunner blankly, uncomprehendingly — and each smears herself (and her lovely costume) with black sludge. There is a sense of gravity and a hint of horror; some of the subsequent movements simulate violence and abjection, as when two women crawl on the floor, one on top of the other. Yet this was Naharin’s most joyous piece of the evening: The choreography is filled with running jumps and wide, exuberant leaps, and the music by Paul Smadbeck is light, almost tinkly. Toward the end of the piece, one woman dips her hands back into the bucket, and this time washes herself with fresh, clean water.

George Balanchine said, “Ballet is woman”; Ohad Naharin has said, “Dance is not about gender.” At the performance held September 24, (incidentally, without demonstration) an all-male cast performed “Project 5.” The dancers wore tight, black, V-necked shirts and calf-length pants, their midriffs bare. Naharin is not, of course, the only choreographer to attempt to refute gender roles (see, for instance, the work of Mark Morris). Still, there is theory and there is practice, and the men were undeniably more athletic, perhaps more forceful, than the women. In “George & Zalman,” for instance, their slaps were really slaps. But the traditionalist in me couldn’t help but notice the fact that men and women’s bodies are, well, different. Some of Naharin’s trademark poses in “George & Zalman” — such as the arched back, with backside in the air — look, frankly, sort of ugly on men. Similarly, the arm movements in “B/olero” were simply not as sinuous; instead, the mechanical quality predominated.

The exception was “Black Milk,” where the men’s elevation — they are powerful jumpers — made their rendition seem even more expansive and liberating (albeit less delicate) than when the women performed; the sense of disciplined freedom was invigorating. About half the audience, including one young man in a keffiyeh, gave the dancers a standing ovation. At the very end, a Batsheva dancer asked the audience members to donate to AIDS projects as they left the theater, a request to which they heartily assented.

Batsheva performs at the Joyce Theater through October 3.

Susie Linfield is the author of the upcoming “The Cruel Radiance: Photography and Political Violence”(University of Chicago Press). She directs the Cultural Reporting & Criticism program at New York University.