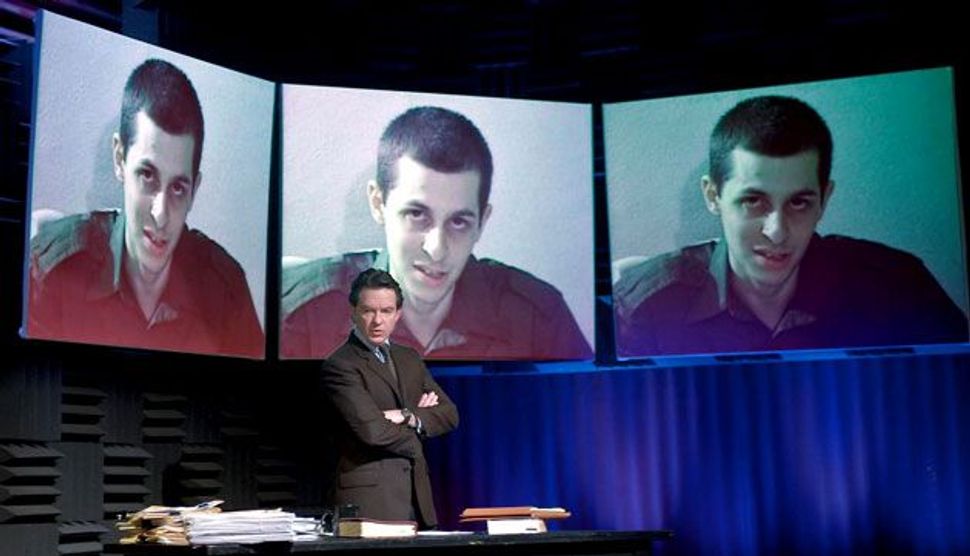 Lawrence Wright, the renowned author and longtime staff member of The New Yorker, seems surprisingly fragile standing alone onstage in New York City’s 3-Legged Dog Art & Technology Center. Considering he is about to take a long, hard look at the history of the Israeli-Palestinian conflict, especially as it pertains to Gaza, one can forgive the jitters.

Wright is a veteran of investigating subject matter that is complex and difficult. His post-9/11 book, “The Looming Tower” (Knopf, 2006), about Al Qaeda, won the Pulitzer Prize. He then transformed his experiences of traveling in the Arab world and exploring the entangled history of Al Qaeda into a one-person play, “My Trip to Al-Qaeda,” directed by Gregory Mosher and presented at SoHo’s Culture Project in 2007. The process of creating the play and the performance itself were then turned into a documentary with same title, shown on HBO in September.

In 2009, Wright set out to write an article about Gaza for The New Yorker. The piece, “Captives,” is a detailed report of Wright’s experiences in Gaza — his meetings with regular folk, senior Hamas officials, rocket launchers, Al Qaeda members, Israeli public figures, writers and military leaders. It became the basis for his new one-person performance, produced by the Public Theater and presented at 3-Legged Dog through October 31. The work, directed by the Public’s artistic director, Oskar Eustis, is newly titled “The Human Scale.”

Wright was specifically interested in the Israeli soldier Gilad Shalit, who was captured in June 2006: “People [in Israel] are obsessed with Gilad Shalit, and the longing to get him back is so prevalent that I really began to wonder what he meant to that society and what it meant when they were talking about making an exchange. The disparity between one Israeli soldier and 1,400 prisoners got me wondering about the scale of human lives, and that’s the theme of this play,” Wright told the Forward.

Shalit is at the center of Wright’s work and is the lens through which he views the recent escalations and the current situation in Gaza. Shalit, Wright argues during his 80-minute monologue, has become a metaphor for the entire situation. “There’s a strange sense of identification. First of all, there are many, around 8,000, Palestinians being held, and many without charge, and they are also cut off from any kind of family… but Gazans themselves feel captive, they begin to look at Gilad Shalit as a symbol of their own suffering. So each side has a strange claim of this one lonely boy.”

Presented on one of four large video screens, the 2009 tape of Shalit in captivity is the opening for Wright’s monologue. Shalit’s dark eyes continue to haunt the piece, as Wright slowly reports on the progression of events prior to his capture and after it. He charts the Israeli withdrawal from Gaza in 2005, the Palestinian elections, Hamas’s victory, Ariel Sharon’s coma, the launching of rockets into Israeli territory and the eventual Israeli reprisals.

The cycle is scary and bloody. Pictures of violence and destruction fill the screens, as Wright, dressed in a suit, recounts every terror act and every attack. His account is fair, though he is not going for balance. In his view, there are those who are oppressed and those who are oppressors. Yet the work is two-sided, in-depth and thorough. Wright turns to early biblical history, Israel’s War of Independence, Yitzhak Rabin’s assassination, the Jewish Talmud, the Quran and even children’s shows to deepen his investigation and to look for further answers. “Who can say? Perhaps only God. But God names some as his chosen, and God also commends others to kill Jews,” he says in the performance piece.

All this makes for an informative yet disturbing evening. Wright is no actor and doesn’t pretend to be one. For him, this format is another means of reporting. The performance, set in an intimate theater, has a seminar feel to it. Directed simply by Eustis, Wright stands alone by his desk, calmly narrating the sickening course of events, as the video screens behind him continue to project the familiar horror.

When Wright recalls his personal experience in Israel and Gaza, the audience sits up and listens carefully, it seems. At one point, he describes a meeting with a few Hamas leaders on a sweltering day in a steamy hot room. Wright had the unfortunate luck of having food poisoning that day, and though he tried his hardest not to, he eventually fainted in front of the leaders. They tried to help him to come to. “These people who are being so kind to me and offering me drinks and help are the same ones who are holding Gilad Shalit,” he realized.

It is this mix of humanity, suffering, grief, anger, ignorance and continuous bloodshed that makes Wright’s work so essential. Gaza is not a place that many choose to visit. Lawrence Wright did, and he brings that visit home with him.

Zohar Tirosh-Polk is a playwright and a translator. She lives in Brooklyn.