Harry Houdini: The Art of Assimilation 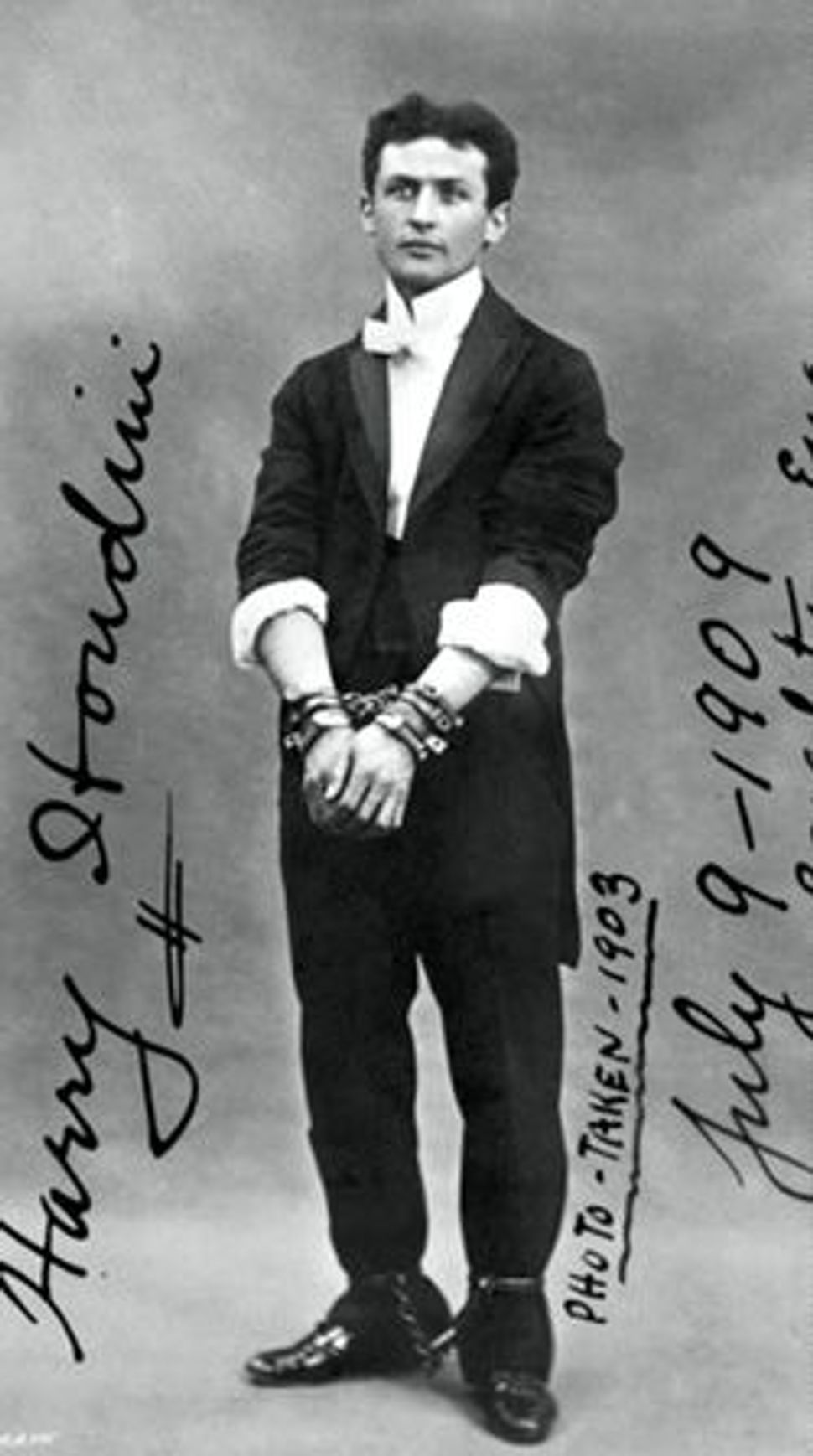 Harry in Chains: Houdini toured Britain in 1903. Image by LIBRARY OF CONGRESS

No Needless Attention: Houdini loved fame and was a consummate showman. Image by COLLECTION OF KEN TROMBLY, BETHESDA MD / PHOTO BY DEAN A. BEASOM

How to explain the durability of Harry Houdini — subject of a new exhibition at the Jewish Museum in New York?

He died more than 80 years ago in Detroit, yet his fame remains undimmed and unabated. Indeed, utter his name to adolescents and — even though they’re unlikely to have seen any of the dozens of movies and documentaries about him, or read any of the books he wrote or the countless biographies — they’ve probably heard of him. Along with J.P. Morgan, Henry Ford and P.T. Barnum, Houdini inhabits, in the American popular imagination, the innocent excitement of the early 20th century before the crash of 1929, before World War II, before evil was systematized.

His longevity is not only the result of his resourcefulness as an entertainer but, as Teller, of the Las Vegas-based team Penn and Teller, puts it, because he was a “multidimensional” character and “a force of nature.” Teller adds, “If there was a new medium, a new technology, if there was a new idea that was center stage in the culture, Houdini was right there.” 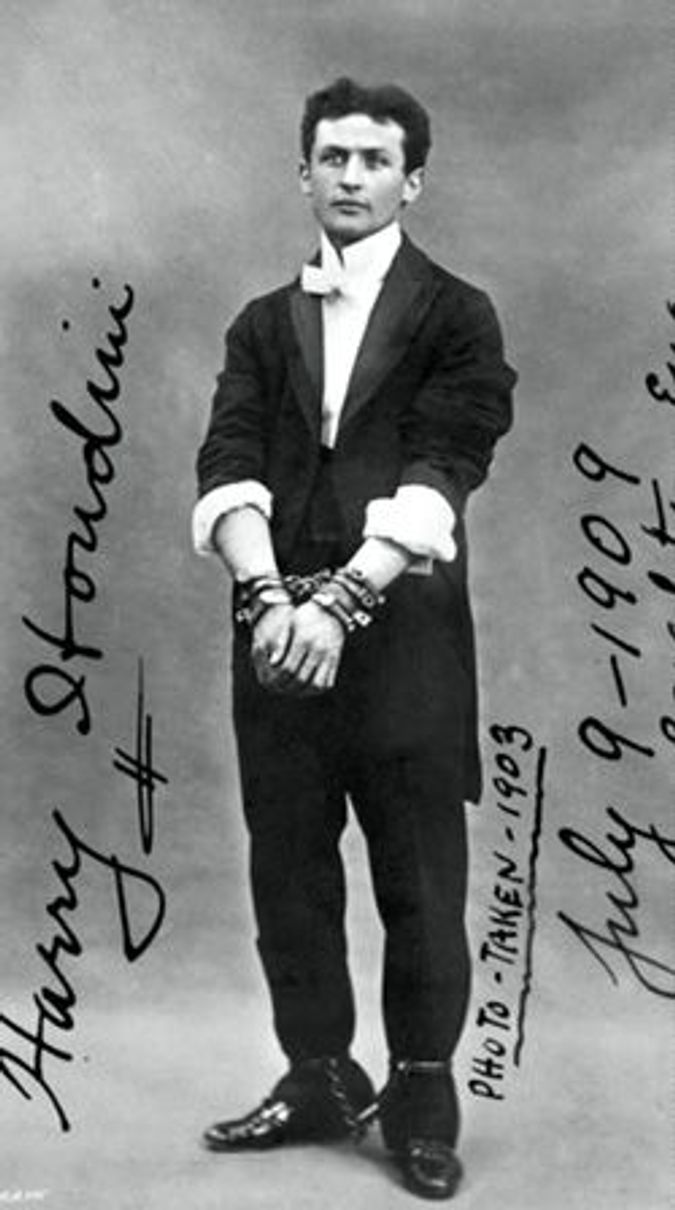 Harry in Chains: Houdini toured Britain in 1903. Image by LIBRARY OF CONGRESS

Or might this Jewish immigrant from Budapest, Hungary — a rabbi’s son, born Erik Weisz (he also spelled it Ehrich Weiss) — be less an artiste than a superhero, a symbol of interwar Diaspora Jews. Unlike David Blaine, whose TV-made stunts display the perversity of the privileged (Blaine is part Puerto Rican, part Russian Jewish), Houdini was a desperate “great escaper” for the masses. He sorted himself out of hopeless situations — like breaking away from a milk can and a Chinese water torture cell, or wriggling out of a straitjacket while being suspended from a crane that was being used to build the New York subway. And he did it all in front of millions of people from diverse economic backgrounds.

The exhibit at the Jewish Museum, curated by Brooke Kamin Rapaport, along with a handsome catalog called “Houdini: Art and Magic,” published by Yale University Press, are invitations to reconsider the myth. They look at Houdini from myriad perspectives. First and foremost of these was his career, including his partnership with his wife, a Christian, and his Buried Alive stunt, in which he was placed, straitjacketed, into a casket filled with sand. But also considered are his Hollywood movies, such as “The Grim Game” (1919) and “Haldane of the Secret Service” (1923), as well as several unfinished films; his endurance in the popular imagination, as in E.L. Doctorow’s novel “Ragtime” (1975), in which he plays an important character, or Matthew Barney’s “Cremaster” films (with a Houdini played by Norman Mailer). He even appears in the work of contemporary artists like Vik Muniz, Allen Ruppersberg and Deborah Oropallo, who use conceptual techniques to invoke Houdini’s enchantments.

Houdini’s name is synonymous with escape, but that simply bolsters, and is bolstered by, his fame. There’s a United States Postal Service stamp that replicates one of Houdini’s favorite posters, a musical based on his life and a Houdini Plaza in Appleton, Wisc. He is also said to have named Buster Keaton after he saw the future vaudevillian fall down the stairs uninjured, then told his father Joe Keaton: “Your son is quite the buster!”

The Jewish Museum exhibit relies on the intelligent organization of memorabilia to map out Houdini’s wonders. He left behind a large trove of what anthropologists call “material culture”: extraordinary sepia photographs; his personal diaries; lithographs, publicity posters and other theatrical paraphernalia; newspaper and magazine clippings, and biopics such as the 1953 “Houdini” with Tony Curtis, directed by George Marshall.

Then there are the stage props eternally connected with Houdini: chains, ropes, handcuffs, straightjackets and man-size tanks. In part, Houdini’s image is attached to them because of the metaphor of escape he has come to represent. Why is Houdini pertinent now? What keeps him in vogue? Serendipity might be the easy answer, but not the right one. I’m inclined to believe, in part, that given the current technological bombardment that defines us, we have lost the capacity to be enchanted by theatrical acts of wizardry, and Houdini’s stunts remind us of our basic instinct to be hypnotized by what seems, on sight, impossible. What kinds of superheroes do we embrace today if not plasticky ones, depending always on special effects?

In any case, Houdini’s allure is dispensed in different ways in the exhibit and its accompanying catalog. To Doctorow, it’s all about fantasy. He told Brooke Kamin Rapaport in an interview:

He served as one of the models for a child’s fantasy life. We children had a lot of them. There was Tom Mix, the cowboy, or the great comic-book heroes like Superman, or Joe DiMaggio, or Jack Armstrong, the All-American Boy. Some of them real, some fictitious. And in that pantheon was Houdini. Kids in my generation… loved learning card tricks and sleight-of-hand, making coins disappear, trying to hypnotize one another, that sort of thing. And behind all that tomfoolery stood the figure of Houdini. Even though he was long since dead. Perhaps because he was long since dead.

But my instinct tells me that Houdini’s persistence comes from his greatest act: Jewishness as an illusion. In keeping with the Jewish Museum’s ability to present Jewishness from a different perspective this “Now You See It, Now You Don’t” duality is highlighted in the exhibit and catalog. And in Houdini the museum has found the perfect impostor who is Jewish at the core, yet unquestionably American to the general public.

Growing up, I remember being mesmerized every time I watched the Curtis movie, which happened once a year, in November, when for some reason Mexican television showed it on a Sunday afternoon. The last scene, in which Houdini dies without being able to escape a fish tank, is engraved in my imagination. The movie doesn’t explore his religion although it does cover his crusade against Spiritualism, in which he attacked those who purportedly spoke with the dead. In one such debunking, he ridiculed a medium who pretended to have spoken with his deceased mother — in English, although his mother only communicated in Yiddish and German. Still, what captivated me personally was precisely what was left unsaid on screen: his Jewishness.

The Jewish community loved Harry Houdini then and continues to love him today. This is because he was simultaneously an insider and an outsider. Was he seen in the 1920s as an assimilationist? He surely was, yet that was also the general impetus of those Jewish immigrants from the Pale of Settlement: to make it in America, and to make it big. Harry Houdini was a role model. He didn’t parade his Jewishness — but he didn’t hide it, either. He changed his name because he didn’t want to be seen as an immigrant, although he wanted his peers to respect him; that is, because he wanted the full attention of Americans and the world at large. His Hungarian identity was in his way, so he hid it. Kenneth Silverman, professor emeritus of English at New York University and the author of the biography, “Houdini!!! The Career of Ehrich Weiss” (1996), writes that Houdini ate kosher and moved in Jewish circles, that anti-Semitism roused him and that his Jewish immigrant temperament caused him to work harder than everyone else and to fight animosity through success.

That Houdini remains an object of adoration today, in some measure, is a result of his bifurcated identity. In the end he died, at age 52, after a McGill University student punched him in the abdomen as part of a dare. He traveled to Michigan, where he performed at the Garrick Theater, after which he passed away, of a ruptured appendix, peritonitis and streptococcal infection. As it turned out, he was, indeed, human. His grave is in Glendale, Queens, in the Machpelah Cemetery, although, as the never-ending interest in him shows, Houdini has escaped his tomb as well.

The exhibit at the Jewish Museum in New York runs through March 27.

Ilan Stavans, Lewis-Sebring Professor in Latin American and Latino Culture at Amherst College, is a Forward contributing editor. He is general editor of “The Norton Anthology of Latino Literature” (September, 2009).

Harry Houdini: The Art of Assimilation