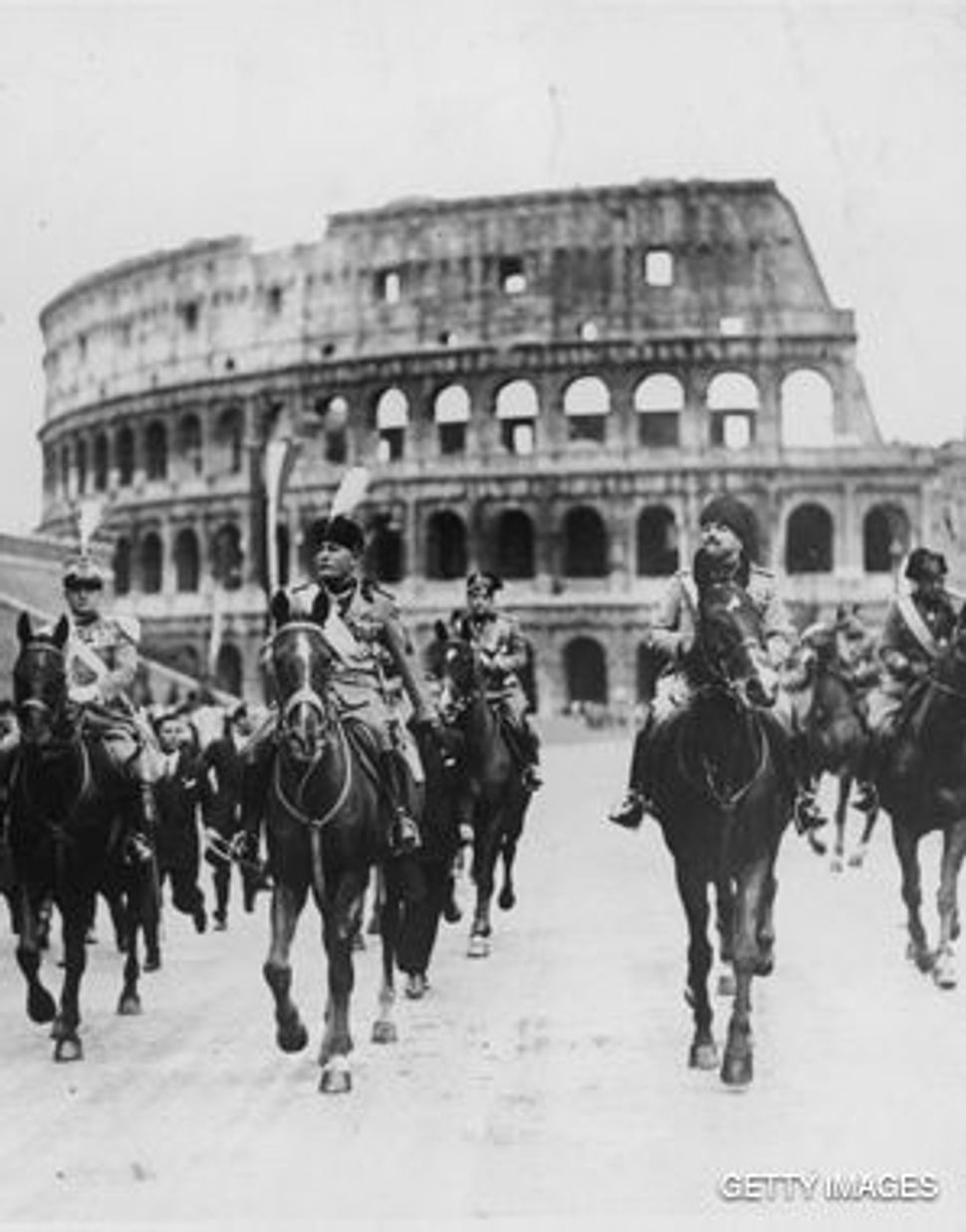 STATECRAFT: In Levi?s eyes, the fascist state had ancient sacrificial ritual at its root. Above Mussolini leads a 1932 parade marking the tenth anniversary of his reign.

Fear of Freedom: With the Essay “Fear of Painting” 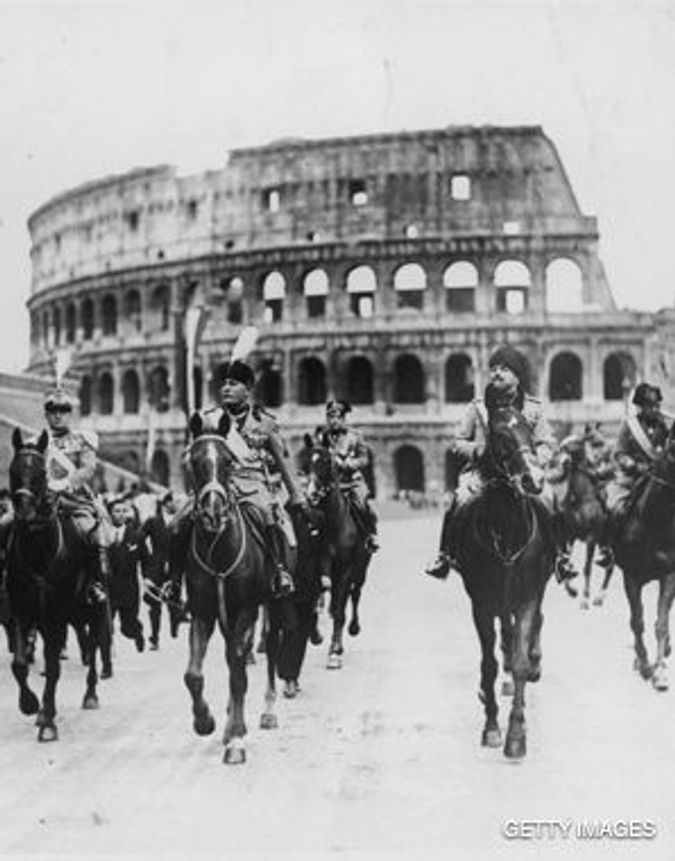 STATECRAFT: In Levi?s eyes, the fascist state had ancient sacrificial ritual at its root. Above Mussolini leads a 1932 parade marking the tenth anniversary of his reign. 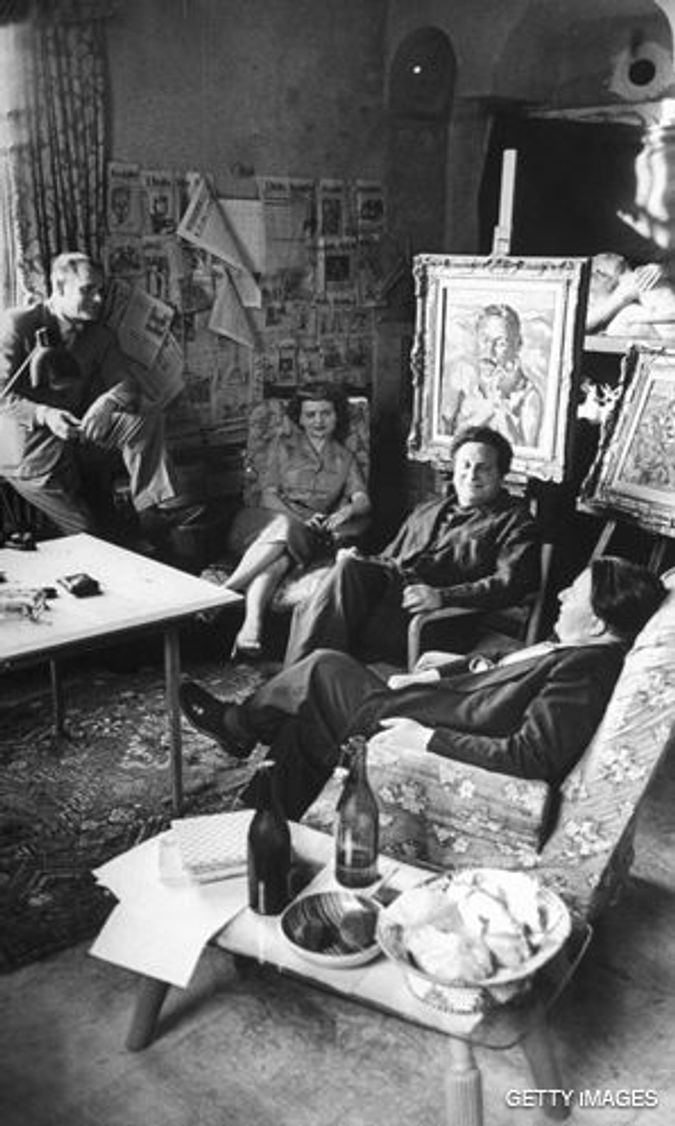 Carlo Levi was a Renaissance Man without a Renaissance: A painter, a writer of essays and fiction, a physician and politician (in the order of his talents), he came of age amid the Enlightenment’s last darkening; patronized by repression, his Medici was Mussolini.

He was born in Turin, Italy, in 1902, to a physician father and a mother whose brother was Claudio Treves, the patron saint of Italian Socialism, a movement in which most of the founding martyrs were Jewish. Levi became active in the movement himself, in the days when the Socialist cause meant a hope for class equality as much as it did anti-fascism. Thanks to this agitation, Levi was branded a public threat and made a confinato, or political prisoner; in 1935 through 1936 he was sent to the Italian south, to the village of Aliano, just inland from Eboli, which received its posterity in Levi’s greatest book, “Cristo si è fermato a Eboli” (“Christ Stopped at Eboli”), written in the late days of the Second World War and published in 1945. In this fictionalized memoir, Aliano is called Gagliano and exile’s provincial cell is rendered as an atelier, or laboratory of the soul. The book’s title is no sententious intellectual proclamation, but an appropriation of a peasant saying: In the dialects of Italy’s south, cristiani means “Christian,” but also “civilized,” or “decent.” Aliano/Gagliano natives were saying that Christ’s civilizing spirit never made it further than Eboli on the Tyrrhenian coast, leaving them unenlightened, and politically unredeemed, victims of paganism, and yet — to Levi — born to a freer way of life:

Christ did stop at Eboli, where the road and the railway leave the coast of Salerno and turn into the desolate reaches of Lucania. Christ never came this far, nor did time, nor the individual soul, nor hope, nor the relation of cause to effect, nor reason, nor history. Christ never came, just as the Romans never came, content to garrison the highways without penetrating the mountains and forests, not the Greeks, who flourished beside the Gulf of Taranto. None of the pioneers of Western civilization brought here his sense of the passage of time, his deification of the State or that ceaseless activity which feeds upon itself. No one has come to this land except as an enemy, a conqueror, or a visitor devoid of understanding.

That memoir of exile in a land where “evil is not moral but is only the pain residing forever in earthly things” achieved international fame for its author; its success was followed by the publication of a book written earlier and in an overtly philosophical, euphuistic style. “Paura della libertá” (“Fear of Freedom”) purports to expose the religious roots of statecraft, and the ancient sacrificial rituals that underlie both worship of the Christian God and worship of the Christian state — which is to say, “fascism” (that term, we should remember, is Italian in origin, from fascio, meaning “unity,” from the Latin fasces, which signified a bundle of birch sticks bound around an ax head — a ceremonial weapon wielded by Roman lictors). Levi’s introduction contains a description of writing this book in the earliest days of the war, while he was living in France, as “incoming English troopships were disembarking the first British army in the harbor of Saint Nazaire”: “All the data of a civilization were dissolving in mist; an uncertain future was lying in wait, uncertain for the world and uncertain for each individual. The old ideologies, all of them, were apparently collapsing, exhausted by sterile criticism and by futile defense: A wind of death and of obscure religion was shaking the ancient states of Europe.” Levi returned to Italy in 1941, was arrested, and survived as an inmate of Le Murate, a former women’s prison in Florence.

Italy’s south is known as the Mezzogiorno, an appellation that means “midday,” and refers to that wilderness’ hot noon sun. There, amid the poverty and dust, far from the softer northern light that imbued the paintings of Italy’s most glorious period, Levi rethought his arts: Jewish intelligence and radical politics, pentimenti of his student days, appeared artificial, their provisions merely artifices, shaky sketches for an image not only unrealizable but also increasingly profane. What had become necessary was an engagement with the masses — a depiction of the common animal impulses that lie just beneath what only a humanist like Levi might call “the human.”

But before the individual could be reconciled with religion or its revival as state, as Levi attempted in a smoldering France, the individual, in Italian exile, had to be reconciled with himself. Just before the war, Levi, always a brilliant painter, fused his artistic identities toward a single, self-liberating purpose, metaphorically uniting his conception of the imperiling mass with blemishes and blobs of heavily applied oils, as if the densities of large Munich crowds shared describable philosophical properties with the thick, abstract textures of the canvas after the work of Matisse and Cézanne. No thoughtless bifurcation or compartmentalization, Levi’s prose reads as his painting is seen: Nothing is; everything is qualified, contingent, constantly questioned. Levi makes no excuses for explicit representation: It’s as if he’s saying that Realism is possible only in “reality”; though that failure, which deprives the artist of Godhood, should be understood not as a judgment on an artist’s insignificance but as a perpetual trial of an evolving moral vision. Levi’s nudes especially communicate the tension of this self-inquiry, and the mounds of breast heaped on the chest of a portraited lover share an uncanny, uncomfortably erotic presence with a painting of mounded corpses — ersatz documentation of the mass murder being perpetrated in Poland (see “Concentration Camp, or Dead Women, the Camp Foreseen,” painted, incredibly, in 1942).

“Paura della pittura,” or “Fear of Painting,” is the companion text to that naked canvas, and the completion of the diptych begun by Levi’s inquisition into the possibility of freedom, which was also a funeral oration for a succession of Romes (including the one he lived in throughout the 1960s and ’70s, as a senator with the Communist Party). After noting the debasement of the universal and secularizing Latin in the formation of the Romance languages (and Latin’s subsequent installation as the official language of the Catholic Church), and after chronicling the final degeneration of the Imperial Rome of the Caesars amid its false, two-dimensional reincarnation as Il Duce’s Impero, Levi translated his political dialectic of the naturally free individual versus the enslaving mass into a critique of the palette itself. He accomplished this most compellingly by censuring abstraction in a text laudable for its belief in the self or soul and not in the reactionary or fashionable. To Levi, abstraction as practice was nothing but compulsory freedom and so, confining. The popularity of abstraction in painting revealed itself to him not as permission to transgress but as an inducement for voluntary submission; a surrender in which individuality would be destroyed by the oldest of controls instituted under new labels and brands, as if governments or ministries of art that begin as revolutions only to soon become conservative and then, eventually, oppressive: “A ceaseless fall and a ceaseless renascence make up history,” Levi wrote in the final chapter of “Fear of Freedom,” “and when liberation becomes religion, then liberation is useless.” (We should recognize, having been kept in the English of this excellent translation, the relationship between “renascence” and “Renaissance.”)

“Fear of Painting” scorns the manifesto form favored by the fascists themselves (favored by any group with creative pretensions — by the Surrealists, by the Futurists), cleaving instead not to reserved assessment but to the prophets’ jeremiad:

And color will detach itself from forms and each of the indissoluble elements of pictorial expression will be isolated and lose every tie with the others, and become itself object of incomprehensible fear: and reason will take another path from meaning; and the passages from one to the other moment will become mechanical and symbolic. For men, frightened shadows, the world from which they are absent loses all consistency and concreteness, that is, every sympathetic connection, and becomes a world of shadow and fear, a world without relations, an abstract world. Abstract art is the art of the abstract individual, the art of the mass. For modern painting, whether we are thrown into an abstract objectivism or an abstract intellectualism, everything, as with King Midas, becomes gold.

To which we might offer this rejoinder: It was not a ruler’s touch that, in the 20th century, brought forth that shiny substance. In Levi’s time, gold was ripped from mouths.