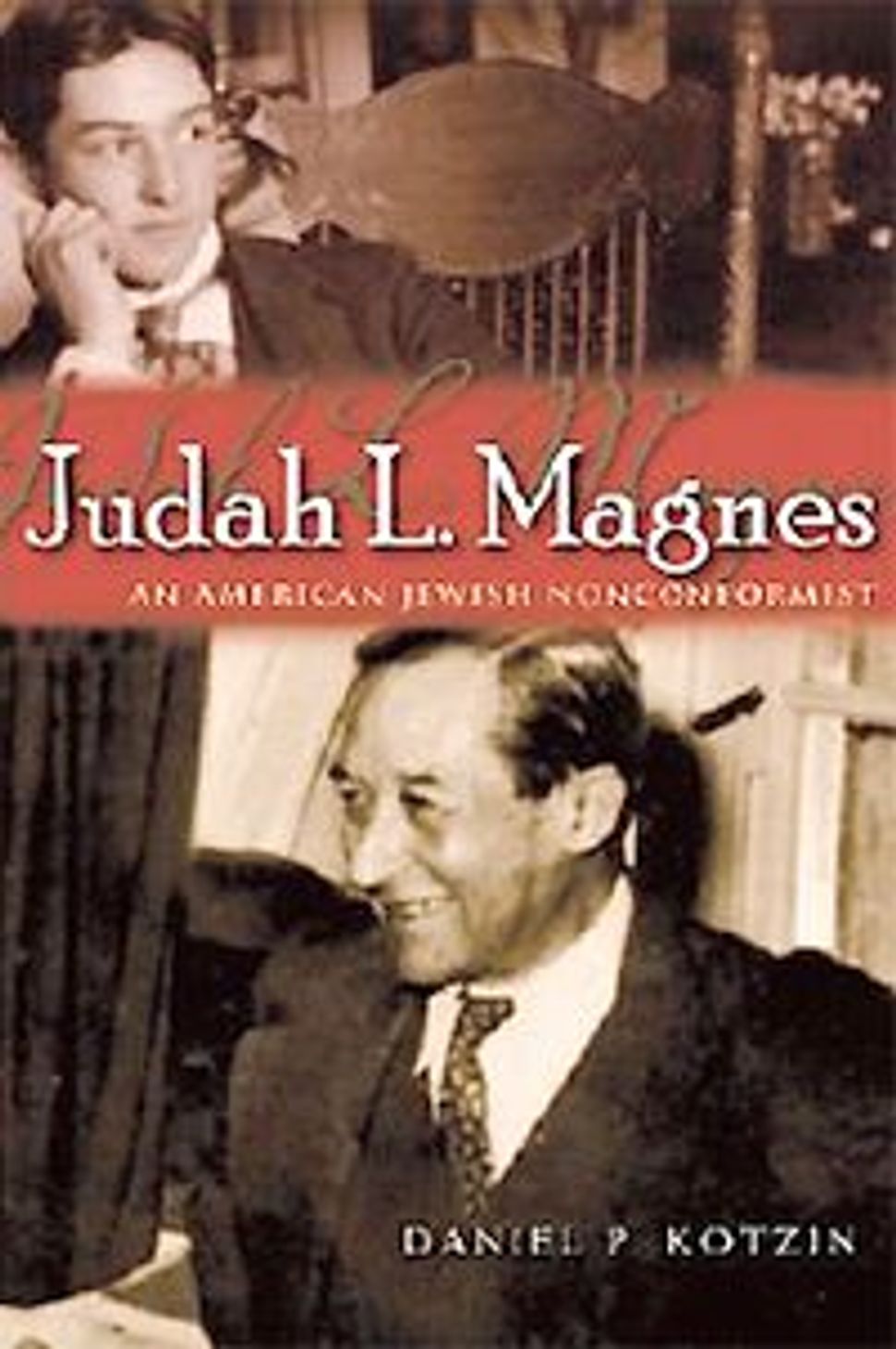 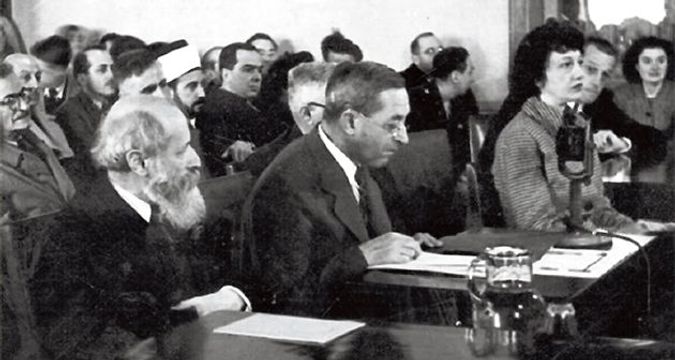 Bearing Witness: Judah Magnes (center) testifies with Martin Buber (left) at the Anglo-American Committee of Inquiry in Jerusalem in 1946. Image by Wiki Comons

Judah Leib Magnes may just be the most important American Jewish leader you have never heard of. Born in Northern California in 1877, the baseball-loving Magnes was integral to the creation and development of nearly all major American Jewish organizations, from the American Jewish Committee to Hadassah. He was also one of the principal founders of the Hebrew University of Jerusalem and served as its head for its first 23 years. Magnes, who died a few months after the creation of the State of Israel, in 1948, is largely forgotten today because, as a passionate advocate of a binational state in Palestine in which Jews and Arabs had equal rights, he ended up on the wrong side of history.

As the likelihood of a two-state solution seems to fade with each passing White House initiative, the idea of a binational solution to the Israeli-Palestinian conflict, long seen as heresy by both sides, is now inching its way in from the fringe. Magnes’s quixotic quest suddenly has new currency, and his proposals and numerous missteps carry important lessons.

Magnes’s rich, profuse life had so many acts that he has proved to be elusive prey for scholars. (His papers in Jerusalem are a treasure trove that would take years to go through.) The lack of a major Magnes biography has been a glaring hole in American Jewish historiography for decades. 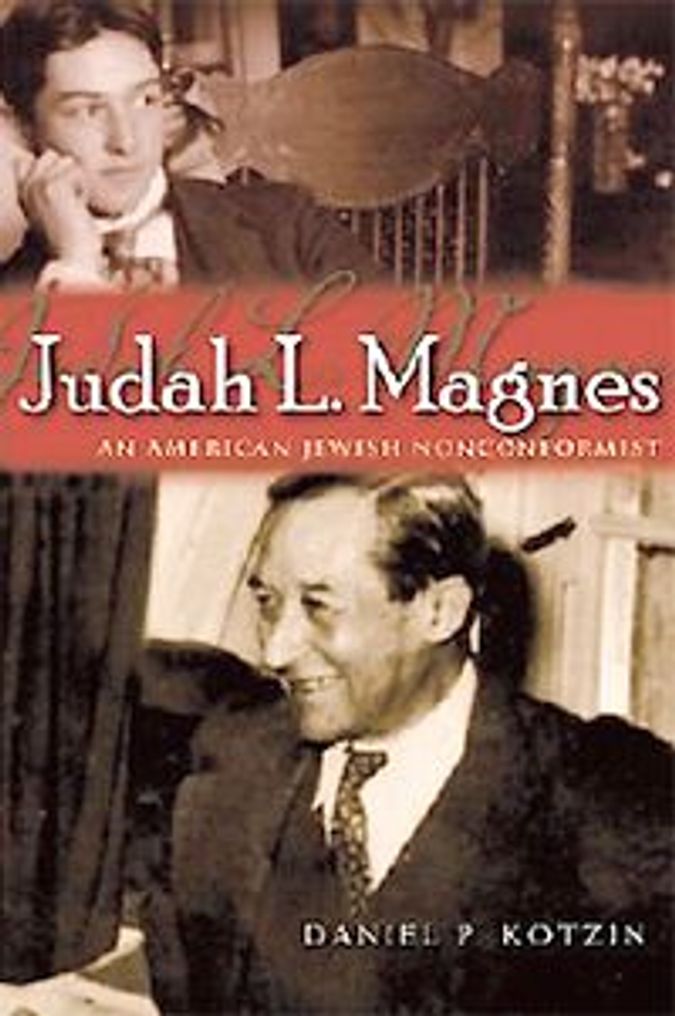 Daniel P. Kotzin’s “Judah L. Magnes: An American Jewish Nonconformist” is not the definitive, magisterial work, but it is almost something better: a concise, readable and evenhanded survey of Magnes’s life and ideas that is a must-read for anyone committed to understanding American Jewish life and resolving the Israeli-Palestinian conflict.

The story begins in Oakland, Calif., where his immigrant parents doted on Magnes, an overachieving first-born child. Leon, as he was then known, was a top student at Oakland High School and the star pitcher of its baseball team. The Oakland Tribune reprinted his bar mitzvah speech, which stressed the importance of Jewish ethics. By the time Magnes arrived at the Cincinnati campus of Hebrew Union College in 1894 to study to become a Reform rabbi, he was brimming with self-confidence.

At HUC, however, Magnes quickly rebelled against what he saw as the bloodless assimilationist creed of Reform Judaism, joining a movement that aimed to reintroduce Hebrew and other Jewish traditions back into the Reform liturgy. (This ultimately led to the creation of Conservative Judaism.) Magnes also became an early adherent of Zionism. This was anathema to the leaders of the Reform movement, who feared that it would undermine their efforts to integrate Jews into American life.

Magnes believed that Jews should take pride in their identity rather than trim their religious practices based on what non-Jews might think. He saw Zionism as a way to renew the Jewish faith for the Diaspora by reconnecting Jews to their roots and to the rich traditions that had been lost to assimilation. To Magnes, the Jewish presence in Palestine should comport with the highest standards of Jewish ethics, which were the foundation for his conviction that the Arab majority in Palestine needed to be treated justly.

Magnes soon made his way to New York, where he managed to win over both the uptown German-Jewish plutocrats and the downtown, left-wing East European Jewish immigrants. Indeed, as the leader and moving force behind the famous New York Kehillah, an attempt to unify the city’s fractious Jewish organizations under one roof, he was perhaps the only man both sides trusted — and that didn’t last.

Magnes was an ardent pacifist who opposed World War I. After the United States entered the war, virtually all the Jewish leaders, fearing charges of dual loyalty, jumped on the bandwagon. But in typical fashion, Magnes became even more radical in his opposition. By the end of the war, he was isolated and discredited. It was a low point in his life, and it forever sensitized him to the dangerous power of nationalism.

In 1922 he moved his family to Palestine, where he managed to rehabilitate himself by championing the new project of creating a Hebrew university. Magnes’s passion and connections to wealthy American Jewish donors catapulted him into the presidency of the new institution. He fought with Chaim Weizmann, head of the world Zionist movement, to keep the university independent of politics. Then, in characteristic style, Magnes used his position as president as a platform to advocate for a binational state.

Kotzin shows how Magnes forced Zionist leaders to confront the Arab-Jewish question. Before Magnes, they were not thinking about how their plans for a Jewish socialist state trod on the rights of the much larger indigenous population. In Magnes’s view, “A Jewish home in Palestine built on bayonets and oppression is not worth having.” Over the course of numerous failed negotiations, he bemoaned the fact that Zionist leaders were never truly interested in reaching a power-sharing accord with the Arabs.

Arriving at such an accord in the 1930s, however, when Jews were fleeing Nazi Germany and finding few havens, would have required Jewish leaders to limit Jewish immigration and land purchases in Palestine and to agree to parity with the Arab population, at best. Unlike most Jewish leaders, Magnes was willing to make these sacrifices in the hopes of building a binational democracy that he believed would build trust between the two sides and eventually allow for a greater Jewish presence.

It is important to note that as averse as the leaders of Jewish Palestine were to making a lasting peace with the Arabs, Kotzin also shows that Magnes, over the course of 20 years of searching, never found a serious Arab partner willing to share Palestine on an equal basis with the Jews.

Magnes was more prophet than politician. Though a spellbinding speaker, he could be cold and remote in person and was both self-righteous and politically naive. He was often duped by duplicitous British and Arab politicians, and hurt his cause by seeming to ally himself with people of questionable integrity.

Nevertheless, despite suffering numerous Jewish death threats and ostracism in much of the Jewish world, Magnes never gave up the fight. To their dismay, his Zionist antagonists could never seem to shake him. Even after Israel was established, Magnes popped back up (with the help of Hannah Arendt) with a proposal for a confederation with a Palestinian state, which he called the United States of Palestine. Weeks before his death, in October 1948, he spoke out forcefully against Israel’s refusal to allow the return of Arab refugees who had fled or were forced out during the War of Independence.

Magnes kept the fire burning for an alternate vision of Zionism — one that would have ensured Zionism’s legitimacy in perpetuity. At a time when a rising number of Jews no longer identify with Israel and are questioning the morality of Zionism, Magnes’s ideas are worth a second look.

Laurence Zuckerman is a former New York Times reporter working on a book about American Jewry and the Holocaust.