Absorbing Art of an Expressionist Poet 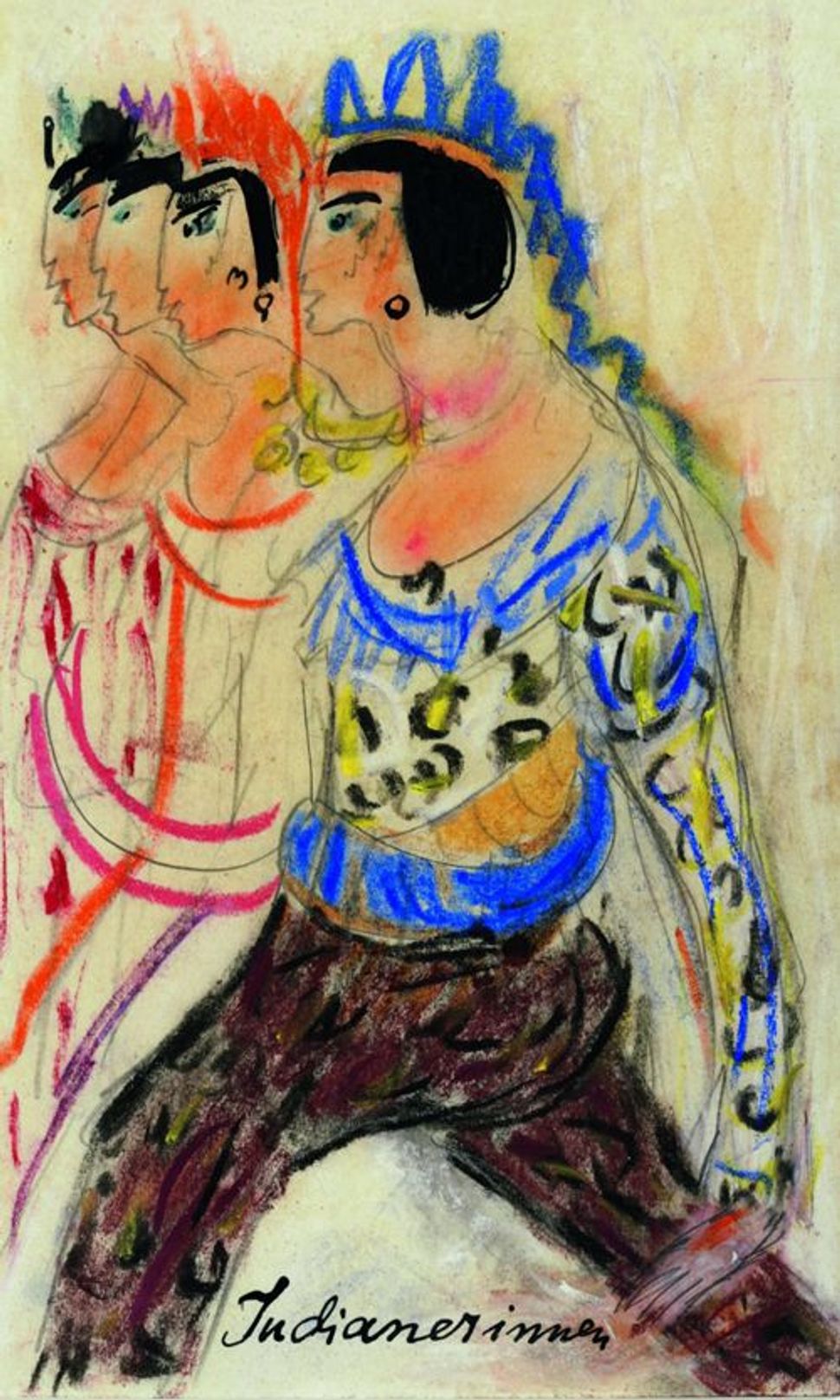 Else Lasker-Schüler was one of the most influential literary figures in early 20th-century Berlin. She was known for her literary Stammtisch, or get-togethers, at the Café des Westens and for her bohemian ways. But it was her Expressionist poetry, with its penchant for exotic imagery and neologism, that made her famous.

Here in Germany, more than 60 years after her death, her poems are taught in schools, her plays are still performed and there is even an intercity train named for her. In the English-speaking world, however, she is hardly a household name. And it is fair to say that in both places, her sizable output as a draftswoman is equally little known.

Intended to correct this oversight is “Else Lasker-Schüler: The Pictures,” which, on view at Berlin’s Hamburger Bahnhof until May 1, exhibits the complete surviving graphic works of the writer-artist.

Developed in cooperation with the Jewish Museum in Frankfurt am Main, where a version of the show was presented last autumn, the exhibit marks the first time that Lasker-Schüler’s drawings, sketches, lithographs, collages, illustrated letters and postcards are being exhibited in a public art museum.

The Hamburger Bahnhof show opened the same day as a thoroughly bizarre installation that featured live reindeer, mice and canaries, and fridges full of reindeer urine and poisonous mushrooms. The stench of the petting zoo only faded as one walked up the flights of stairs to the Lasker-Schüler exhibit.

The text-heavy exhibit is elegantly, if somewhat confusingly, laid out. A mock-up of an old Berlin cafe that greets the visitor is at once an elegant touch and a distracting one, as the exhibit hardly mentions Lasker-Schüler’s much more prominent literary output. Generally speaking, the show seems designed for those already familiar with her poems and plays. The lack of context regarding her literary life is made more frustrating, considering how many of the graphic works relate specifically to her texts.

Lasker-Schüler was one of the few women active in the Expressionist movement. Born in 1869 to a well-to-do Jewish family in what is now Wuppertal, in 1894 she moved to Berlin, where she began publishing her poetry in 1899. Her circle of writers included Karl Kraus, Georg Trakl and Gottfried Benn. Martin Buber was a lifelong friend and confidant. Though they often sparred over art, religion and love, Buber considered Lasker-Schüler a “true poet.” In 1932, she was awarded the Kleist Prize, one of Germany’s top literary honors. She contributed poems and reviews to the movement’s legendary journal, Der Sturm, which was founded by her second husband, Herwarth Walden, whose real name was Georg Lewin. (Lasker-Schüler inspired both the journal’s name and her husband’s pseudonym.) Through the magazine, she befriended artistic luminaries Franz Marc, Oskar Kokoschka and George Grosz.

Her first known drawings date from 1906, the time of her budding friendship with Marc. Indeed, many of the works displayed are depictions of Lasker-Schüler’s alter ego, the mythical “Jussuf, Prince of Thebes,” the addressee of Marc’s famous series of watercolor postcards.

The “primitive” style discernible in all of Lasker-Schüler’s drawings was inspired by the Egyptian art she saw at a 1913 exhibition of the German Oriental Society. The figure of Jussef graphically resembles the pharaoh Akhnaten, while also combining Egyptian, Arab, Jewish and Christian elements. This blending is typical of her graphic works. Her figures are flattened, and in these exotic depictions, so are the differences among Jews, Arabs and Egyptians.

The Hamburger Bahnhof show makes a connection between her compositions and the rows of staggered faces one finds in Egyptian art. Her profiles from the 1910s and 1920s have a woodcutlike quality that suggests the Egyptian rock art she saw in the contemporary Berlin exhibition. The groupings, often cluttering the small frame, bring to mind the street scenes of Ernst Ludwig Kirchner, the key Expressionist painter known for his sinister and savage depictions of urban life. Many of the drawings were set to accompany her own texts, the titles of which can at times be deciphered underneath or to the side of the paper in the artist’s scrawl.

Background elements play a more important role in the later drawings, especially those done in Palestine, which she first visited in 1936. There, the crowded clusters of buildings, windows and rivers bring to mind Egon Schiele’s rare landscapes, with their vertiginous patchwork of cliffs, trees and houses. Most of the drawings are filled in with ink, pastels or watercolors. Lasker-Schüler favors intense combinations of reds, greens and blues whose impression is overwhelming. You can almost smell the spices coming from the bazaar.

One imagines that in another time and place, Lasker-Schüler could have made a decent living designing New Yorker covers. Her drawings have a rough and sketchy quality that is at once exotic and urbane. Her human figures often seem hastily executed, the main labor having gone into form and composition. Her bodies are often undefined, formless and floating — even sexless. One curious exception to this portrayal of figures is in her depiction of animals. To them she affords an extreme amount of care, and in some cases even careful crosshatching.

With the Nazis’ rise to power, Lasker-Schüler’s writings and drawings were deemed degenerate by the regime. Several of her works were exhibited at the infamous 1936–37 propaganda exhibition “Bolshevism Unmasked” in Munich. The Nazis removed a trove of her drawings from the holdings of the Neue Nationalgalerie in 1937. The vast majority have never resurfaced.

As for Lasker-Schüler herself, she fled first to Switzerland and then to Palestine, where she settled in Jerusalem, facing increasing poverty and ill health. The exhibit makes clear that her years in Jerusalem, where she lived continuously from 1939 onward, were far from happy. She felt like an outsider, and wrote that despite the country’s beauty, she was “sinking into myself and will die here of sadness.” She was intensely homesick and felt alienated, not least because she lacked knowledge of Hebrew. Yehuda Amichai, her first translator to Hebrew, remembered that children would mock her as she walked down the streets in rags and tatters. She died at age 75 in 1945 and is buried on the Mount of Olives.

Owing to the fragility of these works, it is not likely that the majority of these drawings will be much exhibited in the future. The catalog to the exhibition, however, reproduces, for the first time, all of Lasker-Schüler’s known drawings. These graphic works show a remarkable coherence of style — a genuine and consistent artistic signature. Their lack of variety and a general repetitiveness, however, may fail to convince visitors of Lasker-Schüler’s genius as a draftswoman. But even if the Hamburger Bahnhof exhibit doesn’t make a compelling argument for her greatness as a visual artist, it adds another dimension to our knowledge of a pivotal figure of early 20th-century culture whose life and work deserve to be better known outside Germany.

“Else Lasker-Schüler: The Pictures” is on show at the Hamburger Bahnhof Museum for Contemporary Art in Berlin until May 1.

Absorbing Art of an Expressionist Poet