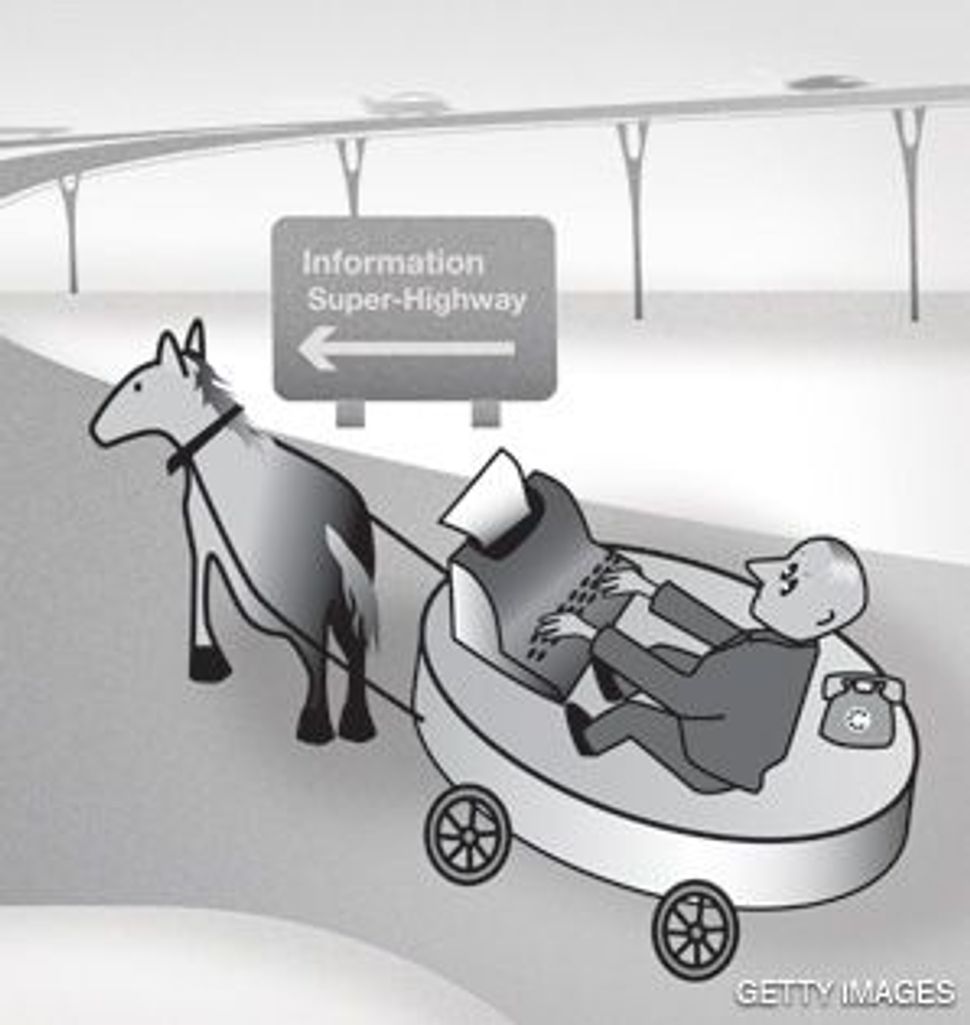 Honorary Member of the Tribe. Good for the Jewish people. Rabbi of technology. Three phrases I’ve heard more than once to describe myself. 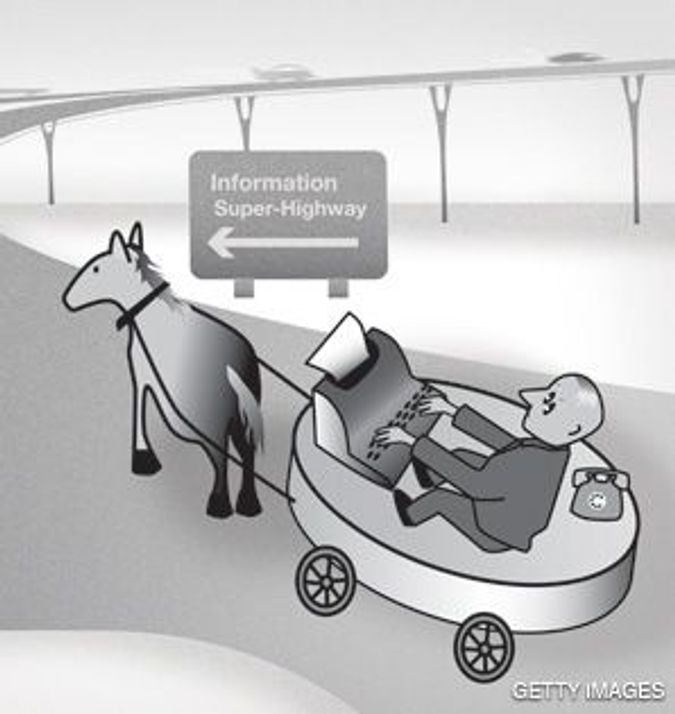 How, you might ask, did a girl raised in a Baptist church in Colorado (my parents lived down the road from the Focus on the Family headquarters) simultaneously learn how to correctly pronounce the word “nachas” and carve a niche for herself as the gentile helper of Jewish technophobes?

The question occurred to me sometime between coaching new rabbis on how to take an online course and helping a team of teachers bring social media from synagogues to a wider audience, part of the work of my company, Talance, Inc.

The answer: In short, it happened because the Jewish philanthropic world I’ve been working in since 2003 needs help. Technology is whizzing forward, picking up secular not-for-profits and Christian evangelists who have figured out how Web 2.0 — usually those technologies that bring people together through such social networks like MySpace, or encourage people to generate their own content — can assist them with growth and with community building. Meanwhile, many Jewish not-for-profits and synagogues are left behind, confused by the options and unsure of the relevance.

“Honestly, we have to quit asking other Jewish nonprofits for their advice,” said a client of mine who works for a New York-based Jewish not-for-profit. “When we ask them for information, they say, ‘We don’t know, but if you find out, tell us.’ They’re as clueless as we are.”

It’s understandable. Everybody’s a little clueless with new technology. It seems that every week, the next, brightest social media tool is all the rage.

Many secular or non-Jewish not-for-profits realize that this revolution is big and scary and unknown, but they are curious about it and willing to learn. The smart ones have figured out that with a little technical chutzpah they can reach a lot of minds out there, and as a result they’re changing more lives.

Look at Kiva.org, a microlending Web site that lets people such as Paul in North Carolina and Jake from Gainesville, Fla., lend money to small-time entrepreneurs in places like Uganda. If it weren’t for the connectivity of Web 2.0, Kiva never would have generated microloans valuing more than $32 million. Or take MoveOn.org, which gave liberals a stronger voice by creating a forum for them to gather and become active.

So what exactly is breaking down when you take the term “not-for-profit” and put the word “Jewish” in front of it?

It could be a matter of where the money’s coming from. MoveOn.org and Kiva.org are both extremely well funded by a wide range of sources, which makes it easy for them to experiment with new technologies. Plus, many secular not-for-profits receive a push to embrace new technology from behind the scenes.

“Some of the secular nonprofits have boards of trustees and directors with people from large corporations that exert pressure to budget the money necessary for technical development,” said Steven Lubetkin, senior fellow of the Society for New Communications Research and a synagogue tech consultant in New Jersey. He spends most of his time with his podcasting business, ProfessionalPodcasts.com.

“They don’t usually do that in the Jewish not-for-profit world, because so many are owned or controlled by a federation,” he said.

Rabbi Hayim Herring, executive director of Minneapolis-based STAR (Synagogues: Transformation and Renewal), which helps synagogues understand and use technology, knows federations well. He thinks there may be a cultural reason that funders aren’t pushing for more daring Internet use.

“Historically, we’ve been a people of the book, not a people of the byte,” he said. “Our medium up until now has been the text, and those who work in this media are more comfortable with the printed word. There are some synagogues that do their bulletin totally electronically, but not too many.”

Many Christian organizations — especially evangelical ones — have the spirit of startups in Northern California’s Silicon Valley and are definitely composed of people of the byte. Lay preachers can start up churches, and their goal from day one is to grow as big as possible as fast as possible. They do this by spreading the Good News anywhere they can, and accepting new converts. Not surprisingly, they find it easier to tinker with new technologies. In a time when attendance in organized religion everywhere is declining, innovations that promise to reach out to potentially millions of people sound pretty attractive.

These organizations have identified Web 2.0 communication as a tool for their ministries, and many are creating impressive Web presences. The Web site for Revolution Church in Kansas City (www.kcrevolution.org) has a podcast. It also links to a page on MySpace, the popular social-networking site, and has an account on Flickr, an image-hosting site and community platform. Sugar Creek Baptist Church in Sugar Land, Texas (www.sugarcreek.net), hosted a blog that informed members about the development of a new building while accepting online donations to pay for it.

Rabbi Aaron Spiegel, information technology director of the predominantly Christian Indianapolis Center for Congregations, said, “This is exactly what congregations are trying to foster, a venue for [them] to give feedback and voice their opinion.” Not to do so, he noted, is to risk alienating a host of future generations — generations that take technology for granted.

In fact, these younger generations, especially millennials, who are just now entering the work force, are likely to be the ones bringing Jewish philanthropies into the 21st century. Today’s 24-year-olds grew up with this technological revolution; they were in diapers when the Internet took hold. Technology was never something they had to get used to, but not having it feels like deprivation.

Sharna Goldseker, vice president of the Andrea and Charles Bronfman Philanthropies, directs 21/64, a project that helps wealthy millennials understand how to invest their resources. Goldseker also works with federations on how to bring “next-generations” into their networks.

These people will force the landscape of all philanthropies — Jewish or otherwise — to change, even if it’s a difficult task. “It’s easy to look back and outline shifts [in our culture], but when you’re in them, it feels turbulent,” Goldseker said.

As Spiegel said: “They have to change. No doubt about it. The Jewish world as a group has to be more responsive to the world and the way things work. If we don’t, more and more people are going to say, ‘This world is irrelevant to my life, and I’m not going to participate.’ The benefit of responding is, they get to stay relevant and in business.

“It will happen,” Spiegel said, “probably sooner rather than later.”