An Olympic Welcome, From Your Friendly Neighborhood Big Brother 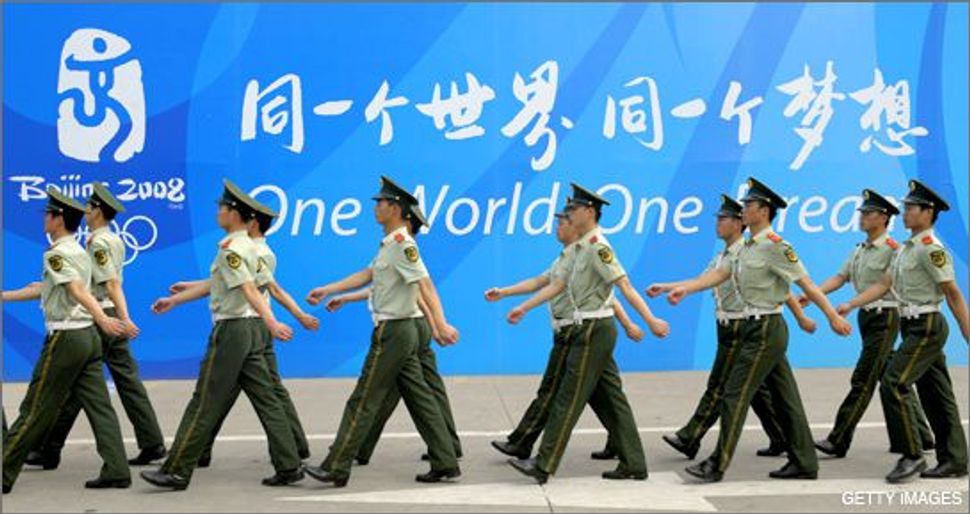 The colorful billboards that hang along the highways, boulevards and parks here declare the Beijing 2008 Olympic slogan, “One World One Dream,” in a number of languages, including Chinese, English, French, Spanish and Russian. Hebrew did not make the cut. Given that the entire population of world Jewry could fit into this city of 17 million, with a few million left over, it’s easy to see why. (China has 160 cities with a million residents or more.)

Before arriving in Beijing for the first time in the spring, my knowledge of Chinese society and culture was limited to the gastronomic variety (“mu shu” — as in pancakes — for the record, is not real Mandarin), blurry footage of the 1989 Tiananmen Square protests and various scandals involving tainted pet food, medicine and children’s toys-turned-hallucinogens.

But as a journalist, China is a prime destination, especially as the country and, indeed, the world gear up for the Olympics. It seems that nowhere, perhaps besides Israel, receives as much attention on the international stage. I was here for the flare-up of patriotic fury following the global torch-relay protests. I felt the earthquake that struck Sichuan in May all the way in Beijing — the distance from New York to Wisconsin — and in the weeks that followed, I spoke with bereft parents who had lost their only child and were living in refugee tents. Even in their grief and anger over the suspected faulty school construction that took their children’s lives, they voiced a hope for a “great Olympics.”

Despite the sometimes-belligerent nationalism so widely reported, most Chinese are extremely friendly and humble. Even more so as Beijing has unveiled its $40 billion Olympic facelift. These folks are damn proud, and want the world to feel at home, even when some things get lost in translation.

As a waiguoren, a foreigner, I am almost always greeted with a smile by shopkeepers, waiters or students seeking to practice their English, help me find my way or tell me their thoughts on George W. Bush. “I like America but not the American government,” said a man walking his dog the other night, after I told him I was from New York City. I held my tongue.

This city is breathtaking — the size, the architecture, the Olympic embellishments. The new China Central Television headquarters looms like a glittering spaceship over downtown; shrubbery trimmed to resemble Olympians weightlifting, cycling and playing tennis rise next to glass office towers, and legions of volunteers in blue-and-white jerseys hover on the sidewalks. Yet all these fancy trimmings can’t hide the fingerprints of an authoritarian regime that works furiously to know all. Activists have been imprisoned, magazines banned and tourists required to register their whereabouts with the police. Throughout the streets of Beijing, one can find thousands of the city’s Neighborhood Committee members wearing red armbands while idly fanning themselves and watching the public. “If anything should happen, I can help,” said one old man, quite seriously on Sunday, not too far from the Workers’ Stadium, where the Olympic soccer matches will be held. As I rode my bike through the city this past weekend, seeing these mostly elderly committed citizens stationed every 20 feet or so, I wondered what their role really was.

On Monday my question was answered. When around two-dozen local residents who had been evicted from their homes in the city center launched a protest over their displacement, near Tiananmen Square, it was not the uniformed Public Security Bureau police who dragged them away, but Neighborhood Committee members. Despite all the signs featuring the cuddly Olympic mascots, known as Fuwa, and even people on the street saying “welcome to Beijing,” I don’t feel completely at ease here. Coming from the U.S., I am not used to the kind of surveillance that Beijingers take for granted. And this hyper-vigilance is everywhere.

As I walked into the gilded lobby of a fancy spa this past weekend, a woman in a stylish business suit rose from a desk and asked for my passport. As I had never been asked for ID there before, I asked her why.

“Control,” she said curtly, “for the Olympics. The Public Security Bureau needs a copy.” As if foreigners coming in for foot massages were really a security risk. But I didn’t say anything. In China, it’s best to follow orders.

An Olympic Welcome, From Your Friendly Neighborhood Big Brother