Beijingers Holding Their Breath, and Not Just Out of Anticipation 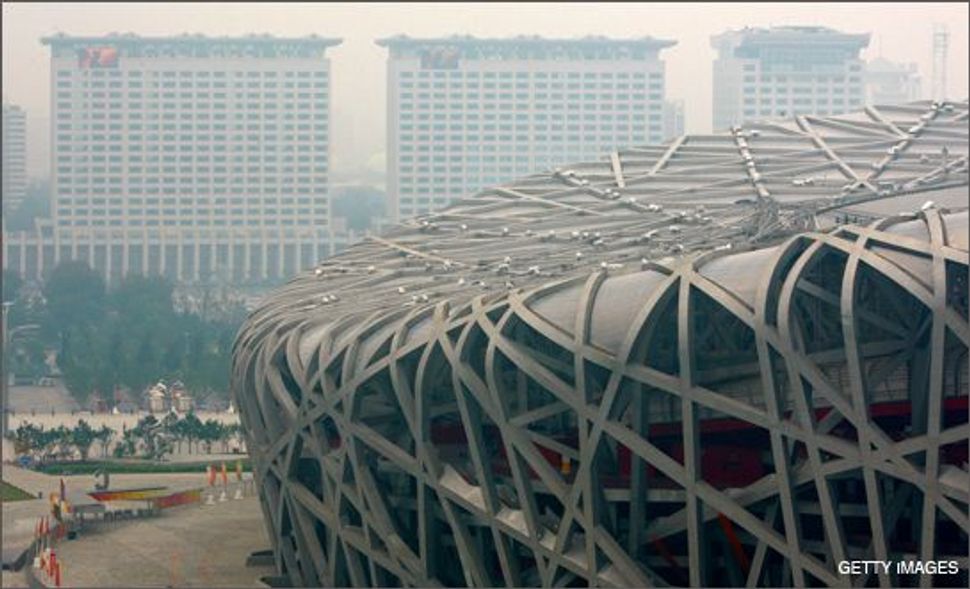 The sky here today is a blinding white. No puffy clouds, no patch of blue. No bright sun. Beijingers will tell you this is normal humid summer haze. China Daily ran an article today under the headline “Air is fine, let the Games begin.” The piece quotes from yesterday’s press conference with the International Olympic Committee’s president, Jacques Rogge, where he reportedly said:

What they [China] have done is extraordinary: planting millions of trees between the Gobi Desert and Beijing, removing hundreds of thousands of polluting cars, closing polluting petrol stations I think they have done a commendable job. The statistics are very clear. The pollution levels are coming down. It is not yet perfect. [But] it is safe for the athletes.

Rogge explains that the soupy gray haze is in fact not a thick layer of pollutants choking the lungs of noodle vendors, police and tourists. “Humidity and heat,” he said, “is not the same as pollution.”

Try telling that to the American cycling team who were caught walking through the stunning new Beijing airport wearing masks. Chinese media made sure to publicize their rather stiff apology a day later. “We offer our sincere apologies to BOCOG, the city of Beijing, and the people of China if our actions were in any way offensive. That was not our intent,” read the mea culpa.

But according to a New York Times blog post, while the air quality is better, it’s not pollutant free.

Let me say this: I was here in the spring and remember days the air was so smoggy that the sun didn’t appear through the haze until it set in a deep red blur somewhere near the horizon. I remember walking through Tiananmen Square, my eyes itching and my throat burning from the construction dust that hung in the air like smoke. There were days I had to retreat into the nearest air-conditioned mall to get away from the smog. What we are breathing now is not the same thing. The shuttered factories and banned cars have accomplished something.

In fact, the city glittered under blue skies this past weekend. Everyone in Beijing felt the rush of a sunny day and took to the squares to dance and the parks to sing. Tonight, I plan to watch the opening ceremony on the roof of the Emperor Hotel, overlooking the Forbidden City. Millions of Beijingers are planning to head outside for the fireworks rather than watch them on a television screen.

The streets are packed with people today, which is a national holiday in China. The excitement is thick, as locals and tourists plan how they can best avoid the massive traffic jams, street closures and price-gouging. Large screens have been set up in public parks and squares for crowds to gather and watch the Opening ceremony.

Ruddy-faced soldiers of the People’s Liberation Army are lounging on the grass and sidewalks preparing for tonight. Teenagers are wandering the streets with Chinese flag fake tattoos on their faces. Red banners hanging from trees around the city sum up the hype and hope that has been rising here for days now on the part of both the common people and the government. They read: “Participate in the Olympics; Enjoy the Fun Together.”

Beijingers Holding Their Breath, and Not Just Out of Anticipation