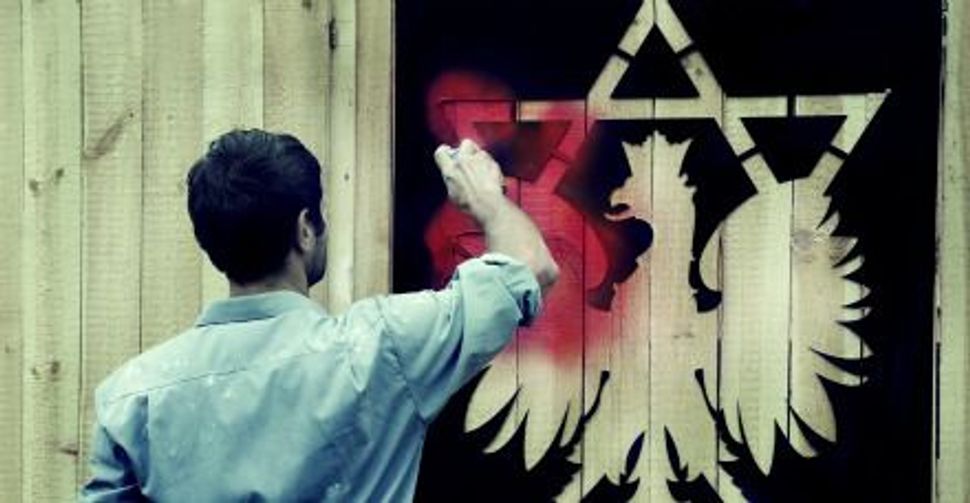 Image by Yael Bartana, Film Still From ?Mur I Wieza?

Building a Future? Pioneers build a tongue-in-cheek Polish kibbutz, decorated with the logo of the fictional Jewish Renaissance Movement in Poland. Image by Yael Bartana, Film Still From ?Mur I Wieza?

Yael Bartana’s film trilogy “…and Europe Will Be Stunned” turns national representation at the Venice Biennale on its ear. The 40-year-old Bartana, a rising art star, is an Israeli representing Poland, where she is neither a citizen nor resident, thereby breaking the Biennale’s traditional format. The gesture nevertheless is fully in line with the artist’s message; both her iconoclastic presence and her work query national ideals through polemic, irony and spectacular visual effects.

Bartana won last year’s prestigious Wales International Visual Art Prize from Artes Mundi for “work that stimulated thinking about the human condition” and her Biennale work continues to stimulate. (Full disclosure: I contributed a cholent recipe to the “International Cookbook” that serves instead of a conventional catalogue for Bartana’s exhibit.) “…and Europe Will Be Stunned” is made up of three short films gathered under the rubric of the Jewish Renaissance Movement in Poland — known under the acronym JRMiP — a fictional entity founded by Bartana.

Though JRMiP does not exist, Bartana has designed its manifesto and logo: a blood-red Polish Eagle combined with a Magen David. Blurring the lines between fact and fiction further, membership cards and tote bags are available.

From the viewpoint of the modern nation state, Jews have often been seen as a complication, threat or challenge to the state’s social and cultural homogeneity. Bartana’s trilogy engages with these all-too-familiar conflicts over homelands and territories. “Mary Koszmary” (“Nightmare”), the first of the three films, is a dramatic call for Jews to return to Poland. The film takes place in a rundown public stadium, with tiers of seats grassy and overgrown. The site is a bucolic ruin that evokes not only its ghosts, as all ruins do, but also an uncanny memory. The dialogue is in Polish, subtitled in English, and it features Slawomir Sierakowski, a well-known young journalist in Poland who exhorts the Jews to return and his fellow Poles to welcome them back. “Jews! Fellow countrymen! People! Peeeeeeople!” Sierakowski’s call begins:

You think the old woman who still sleeps under Rifke’s quilt doesn’t want to see you? Has forgotten about you? You’re wrong. She dreams about you every night. Dreams and trembles with fear…. Return to Poland… .And we’ll be together again.

The poignancy — and implausibility — of a Jewish return to Poland is not, of course, Bartana’s invention. It was cynically imagined by Philip Roth’s diasporist alter ego in “Operation Shylock” (1993), who seeks to end a Judenrein Poland, one free of Jews. “Mary Koszmary,” however, protracts the idea, coaxing Jews and Poles to reform as an interdependent community.

But if Poland is a haunted space — haunted for Poles by Jews whose lives are nostalgically represented at souvenir shops, music festivals and museum displays; haunted for Jews by the mixed memory of familiarity and oppression — so, too, may modern Israel, in its history and its silences, be haunted by its Arab population and the traces of its Palestinian past. The call of “Mary Koszmary” for Jewish return and Polish welcome asks Jews to imagine Polish recognition of the Shoah and Polish anti-Semitism. “Come back! We need you!” the film declares. For many viewers, this may be heard as a similar call to Palestinians from Israelis, calling Arabs, like Jews, back to a homeland. The film’s appeal thus invokes Bartana’s post-Zionist as well as post-Holocaust metaphor.

We have heard this positional shift before — the notion of Shoah victims becoming Israeli oppressors — and usually with more inflammatory framing. It resonates stylistically in Bartana’s work, where close-ups of the leather-cloaked Sierakowski, his fatherly attention to a group of Polish boy scouts and the camera panning across the empty stadium conjure Leni Reifenstahl’s 1935 “Triumph of the Will,” the classic film of invocation and rant, with its close-ups of Hitler, its marching Hitler Youth and its sweeping panoramas of Nuremburg’s packed stadium. The analogy of Poles/Jews and Zionists/Palestinians, and the tacit connection of both Poles and Zionists to Nazis, may be facile or offensive to some. It recurs, however, in the staged rituals of Bartana’s trilogy.

If the call to “come back” implies a return “home,” then in both European and Middle Eastern contexts the meaning of “home” must be modified to mean geography and consciousness rather than property or entitlement. And similarly, we may recognize a simple return to the ruin — like Holocaust tourism in its various forms — as itself a traumatic symptom, a melancholic repetition of what is lost and cannot be retrieved. “Rifke’s quilt” was, after all, a stolen comfort, and as Sierakowski’s reminds us, it is now flattened and featherless, an icon of maternal well-being lost and never to be regained.

The polemic continues — both witty and shrill — in the second part of the trilogy. “Wall and Tower” records the construction, opposite the Warsaw Ghetto monument, of what Bartana designates “the first kibbutz in Europe,” in the prewar Jewish neighborhood of Muranow. Drawing again on such interwar propaganda imagery as Helmar Lerski’s 1935 Zionist film “Avodah,” Bartana presents kibbutz builders as Israeli pioneers exhorted to raise their settlement by Sierakowski and a Hebrew-speaking Israeli leader working in a utopian partnership.

To the stirring cadences of the Polish national anthem and the eerie phrases of “Hatikvah” played backward, the team erects its new home: fenced wooden sheds and a tall watchtower triumphantly flying the Renaissance movement flag. “Polish is a beautiful language,” the young kibbutz members declare, as they learn the words for “peace,” “land” and “freedom.” We’re seeing, of course, an inversion of the revival of Hebrew within the Yishuv, as the pre-1948 Zionist community is called. Quickly, however, barbed wire comes to surround the new structure, and with heavy-handed irony, the kibbutz morphs into a lager, or a concentration camp, and alludes to guarded settlements in the West Bank.

The trilogy culminates with “Assassination,” which documents the funeral of a now martyred Sierakowski. In contrast to the empty stadium in “Mary Koszmary,” the setting of this film is a crowded hall of Warsaw’s monumental Ministry of Culture (a gift, Warsovians say wryly, of their Soviet period). The mourners on the dais are yet another symbolic company: a black-clad widow and Israeli journalist Yaron London, both of whom deliver eulogies in Hebrew; two middle-aged women — a Polish art historian and a hyper-fashionable Polish-Israeli immigrant — each speaking Polish, and a pair of uniformed young scouts who proclaim, in English, their commitment to the cause.

As if to comment on their zeal, a woman slowly emerges from the crowd, a silhouetted specter becoming real. “I am Rifke,” she declares, the prewar owner of the flattened quilt. She is modestly dressed, her capped head suggests both Jewish Orthodoxy and a Muslim hijab, and she carries a battered suitcase. “I can be found everywhere; I am the ghost of return.” But caught as if rising from a tomb, Rifke’s phantom presence underlines the sense of both hope and futility. Beyond the wishful dream, what, in fact, would Rifka’s return look like?

As the scouts intone their principles — “We shall be strong in our weakness” — the viewer begins to wonder just what this cause might be. “Mary Koszmary” asks us to rethink history, to work through festering traumas and to put worn-out ghosts to rest. There is a stirring challenge here, as art enables what memory may repress. But as the polemic continues, the ironies that pervade the trilogy fold back on themselves, absorbing and even mocking the proclaimed possibilities. An aesthetic of irony is a risky mode, for it suggests a stance apart, both distanced and engaged. All seems futile or — as irony’s inverse — optimistically naïve. At the Venice Biennale, Bartana’s audience rushed to sign up with the JRMiP and to receive a membership card and a tote bag. But this, too, becomes an ironic gesture: One cannot escape the game. Bartana’s work, then, does not simply preach — that would make it propaganda, the very format she mocks. Rather, the ironies voiced by an Israeli artist in the Polish pavilion platform undermine certainties and signal the flaws of national consciousness. Bartana’s polemic of return leaves us thoughtful, but stranded, with hardly any place to go.