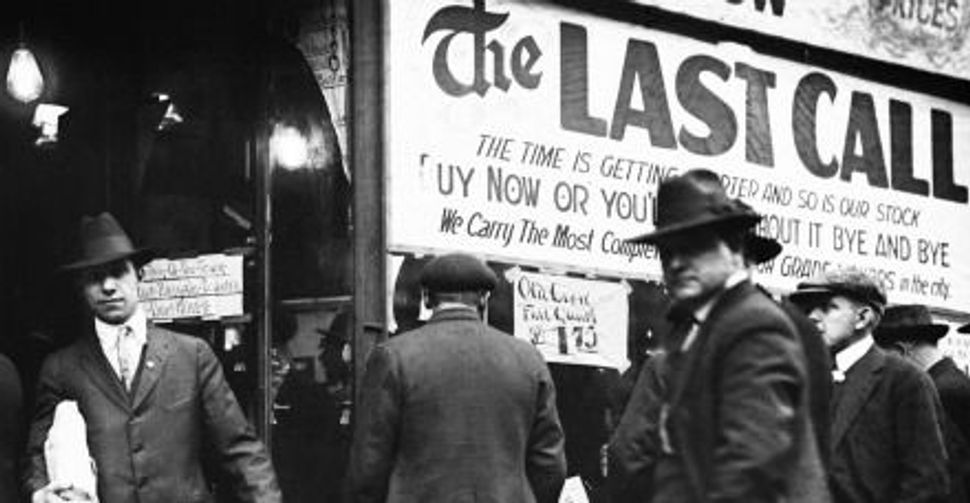 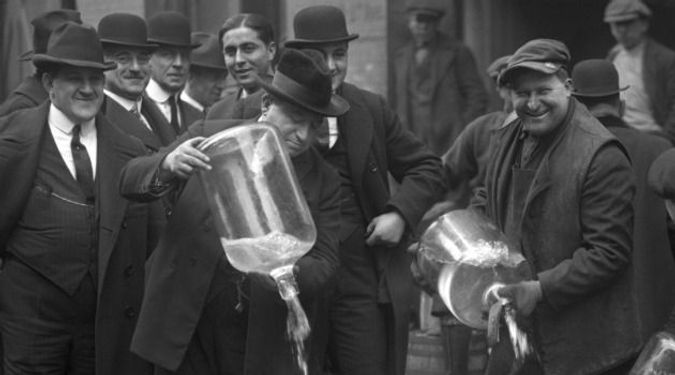 Pouring it Out: The anti-alcohol movement divided rural and urban Americans and native-born from immigrants. Prohibition forced Jews to forge a new identity for themselves. Image by library of congress

In 1908, in Shreveport, La., a black man named Charles Colman was charged with the rape and murder of a 14-year-old white girl. Colman was drunk, and, a reporter for Collier’s implied, had likely been drinking something called “Black Cock Vigor Gin,” which featured a picture of a nude white woman on its label, along with the words “Bottled by Lee Levy & Co.” This racial conflagration, and others like it, only inflamed those groups that already spoke in favor of outlawing products like Levy’s: among them, progressives hoping to save black men like Colman from lynching, as well as xenophobes trying to save the country from what the magazine McClure’s labeled the “acute and unscrupulous Jewish type of mind which has taken charge of the wholesale liquor trade in this country.”

Prohibition was among the defining issues in American politics and civil life in the early 20th century. One thing made clear by “Prohibition,” a captivating three-part series directed by Ken Burns and televised October 2–4 by the Public Broadcasting Service, is that the division between “wets” and “drys” was determined by race, class and geography as much as by drinking habits; drys — largely rural, Anglo-Saxon and Protestant — used the alcohol issue to advance very different ideologies. According to Daniel Okrent, author of “Last Call: The Rise and Fall of Prohibition” and featured in the series, one of the movement’s primary motivations was fear of losing the country to immigrants. Like other immigrants, Jews were caught in the crosshairs, having to renegotiate a relationship to alcohol at the same time as they negotiated an American identity. And after the United States passed its first amendment to curtail civic rights it seemed the one became a stand-in for the other.

The anti-alcohol movement, although politically based in a strange coalition of evangelicals, progressives and women’s suffrage advocates that had recently won women the vote, coincided with the arrival in the United States, between 1880 and 1920, of about 2 million Eastern European Jews, most with limited economic resources. These opposed Prohibition from the start, not least because alcohol was central to their culture. Also by the late 1800s, acculturated Jews were widely represented in the liquor industry. “At first,” said Marni Davis, author of the forthcoming “Jews and Booze: Becoming American in the Age of Prohibition”, “alcohol offered a way for American Jews to present themselves as the best sorts of Americans, as the ones who consume alcohol regularly but are not drunkards, who participate in the economy in ways that benefit communities and society at large.”

As Prohibitionists touted the evils of drink, it was the Jewish distillers, wholesalers and saloonkeepers who found themselves cast as outsiders. Attacking the liquor industry, “dry” politician John Newton Tillman said: “I am not attacking an American institution. I am attacking mainly a foreign enterprise.” To prove it, he listed distillers’ names: Steinberg, Hirschbaum, Shaumberg.

The 18th Amendment, ratified in 1920, declared the “manufacture, sale, or transportation of intoxicating liquors” illegal, but did little to stop the actual flow of alcohol in the United States. Canadian and British whiskey, and rum from the Caribbean, flooded across the borders; homemade beer, wine and moonshine were produced in quantity; speakeasies proliferated, and exceptions for religious, medicinal and industrial alcohol left soggy loopholes in the law. Jews participated in this shadow trade as both buyers and sellers. Sam Bronfman, a Canadian Jew (whose surname comes strangely close to bronfn, the Yiddish word for “liquor”), became the proprietor of a vast smuggling empire along the border between the United States and Canada, buying up Joseph Seagram’s distillery and taking on the company name. Because Bronfman ferried his product across it so successfully, Lake Erie became locally known as “the Jewish Lake.”

Jews were also prevalent in the criminal networks that Prohibition helped install. Their number included Philadelphia’s Max “Boo Boo” Hoff; Dutch Schultz and Meyer Lansky in New York; Newark, N.J.’s Longy Zwillman; Solly Weisman in Kansas; Moe Dalitz in Cleveland, and the notorious Purple Gang of Detroit. It’s troubling, Davis suggests, that these Jewish gangsters are now portrayed as strong Diaspora Jews: heroic warriors against anti-Semitism, their illegal, often murderous actions a form of protest. “I think,” she said, “there is something sort of exciting about the possibility that Jews resisted a law that today is regarded as a failure.” But at the same time, these were violent, murderous gangsters, in it for the money.

Section 6 of the Volstead Act, which allowed Jewish families 10 gallons of kosher wine a year for religious use, left an especially large loophole. For unlike the Catholic Church, which got a similar dispensation, the rabbinate had no fixed hierarchy to oversee distribution. Infractions were rampant. In 1924, the Bureau of Prohibition distributed 2,944,764 gallons of wine; the American Hebrew marveled at the “rapid growth of Judaism.” Prohibition agent Izzy Einstein — himself a Jew from New York City’s Lower East Side and able to spot a ruse — arrested numerous rabbis for dispensing “sacramental” brandy, crème de menthe, vermouth and champagne. The scam was as common among actual rabbis as among those only claiming to be such: Einstein also arrested rabbis of convenience, named Houlihan and Maguire, as well as African Americans who claimed, according to Okrent, to have recently “got religion in the Hebraic persuasion.”

This, Okrent says, was bad for the Jews. Reform leaders believed that Section 6 gave the impression that they were not held to a common standard of law, and sought to abolish it. Doctrinal warfare over wine divided Jews by immigrant and economic status and denomination, pitting Orthodox against Reform. The result, as Davis put it, was a “shande for the goyim.” Henry Ford’s Dearborn Independent claimed that Jewish transgressions against Prohibition represented widespread conspiracy against American morals. “The Jew is on the side of liquor,” Ford wrote, “and always has been.” Part of what made this screed horrible was that it was partly true: Okrent estimates that half the bootleggers were Eastern European Jews; as a result, Jews were seen as delinquents who neither understood nor respected American culture. This despite the fact that, Davis says, bootlegging was so common that it could almost be seen as part of the Jews’ Americanization process.

As “Prohibition” points out, it was actually easier to get a drink while alcohol was illegal — albeit a drink of lower quality and higher price — as unlawful substances can be neither regulated nor taxed (arguments now used in favor of legalizing prostitution and marijuana). Einstein liked to see how long it took to get liquor in each city he visited: His record was set in New Orleans, where a cab driver offered him a drink 35 seconds after pulling out of the station.

Not everyone drank, but those who did drank more. This meant that bootlegging was a huge business, reaching $3.6 billion nationally by 1926, a staggering $43.4 billion in today’s dollars. Bronfman reportedly pulled in $300,000 a month; and well might he celebrate, naming one of his boats the Mazel Tov. With this money, not only did bootleggers and gangsters buy law enforcement and corrupt politicians, but they also made contributions to keep congressional drys in office, forming an unlikely alliance with the moralists of the Anti-Saloon League. Prohibition ended in institutionalizing hypocrisy as well as crime.

By the end of Prohibition, so many Americans were involved in producing, selling and consuming alcohol that Jewish participation seems unremarkable. Eventually, the public came around to the view that most Jews held all along: Prohibition, which had begun as anti-immigrant, was now widely seen as anti-American. The start of the Great Depression was the last straw. With the Repeal of Prohibition, passed in 1933, Jews were among those who rerouted their illegal operations into legal channels. Bronfman moved his business to New York, paid a fine for violating the Volstead Act and bought out Newark’s bootleg kings, Zwillman and Joseph Reinfeld. For him and other Jewish bootleggers, Prohibition had ended by providing a path to status and respectability.

The struggle for American Jewish identity was, at a time when both Jews and alcohol were cultural flashpoints, brought into sharper focus by drink. Ridiculous as the Prohibition experiment seems today, its lessons remain relevant. The issue pitted city against country, rich against poor, and immigrant against native born. Released in an America dividing along similar lines, PBS’s “Prohibition” deserves the notice of Jew and non-Jew alike.