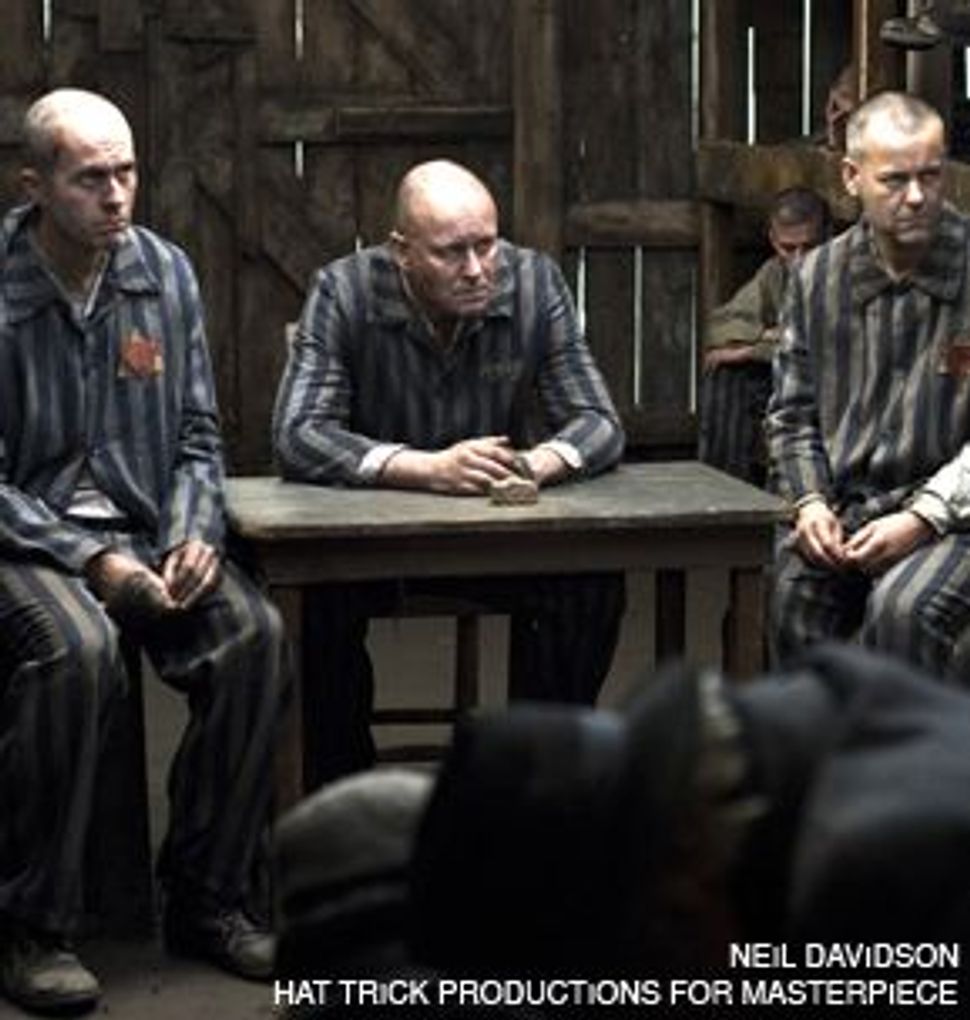 Why do bad things happen to good people? The fact that this question is a cliché doesn’t make it any less pressing. Especially when we’re talking about the Shoah, which was bad in ways that we still have a hard time imagining. 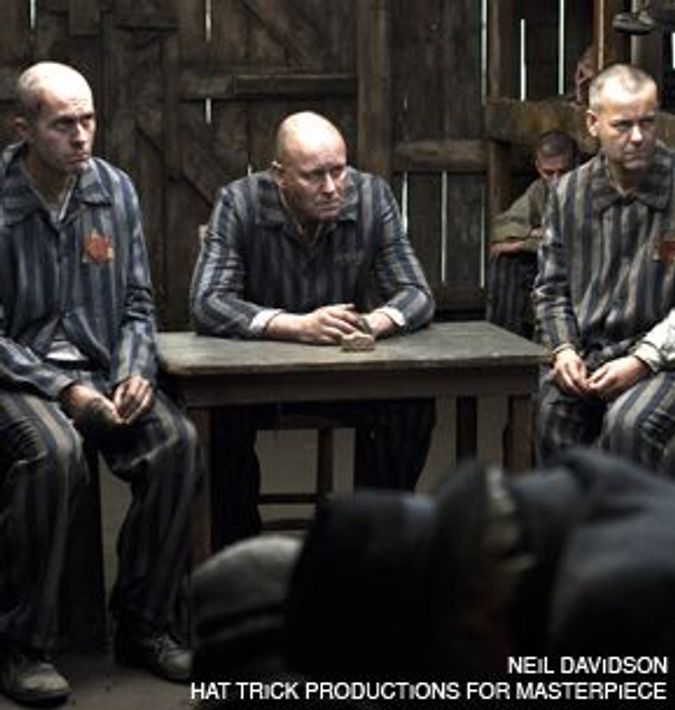 The question is one theme of “God on Trial,” the made-for-TV movie that aired on PBS on November 9. As the title suggests, the movie dramatizes the (probably apocryphal) story of the Auschwitz inmates who, on the edge of annihilation, accused God of turning His back on them — and on the entire Jewish people.

It’s a brilliant premise for a film. First, it addresses a crucial question for believers: If God is just, how could He allow such atrocities? And second, it suggests an intriguing exercise, that of a courtroom drama in a wildly incongruous setting.

Fortunately, “God on Trial” doesn’t waste its promise. Although some parts are problematic (more on that later), the film is mostly brisk, provocative and absorbing.

It begins with a demoralized group of prisoners returning to their block after many are selected for death. A bedraggled transport of Polish Jews enters, still in civilian clothes. There’s some expository bickering, and then Moche (Dominic Cooper), a young man who, despite wearing prison stripes, hasn’t lost his callow bluster, angrily tests the idea.

“He should be here, not us,” Moche says of God. “Let’s put the bastard on trial.”

While some cry blasphemy, others are intrigued. After all, what have they got to lose? The sullenly disciplined Baumgarten (Stellan Skarsgård), a former law professor from Berlin, volunteers to be chief of the court. Schmidt (Stephen Dillane), a sophisticated rabbi from Lodz, will serve as the equivalent of the defense. And Mordechai (Rupert Graves), an assimilated Jew, will be the prosecution.

The charge: breach of contract. By allowing the Nazis to torture and murder Jews, Mordechai argues, God has broken the Covenant with His people.

As a “witness” for the defense, Mordechai’s religious father, Kuhn (Jack Shepherd) testifies that the atrocities are a punishment: “God is just, so we must have done something wrong.” Schmidt also notes that the Jews may be in the midst of a “purification,” a painful process that will lead to something better: “You can hate the knife but love the surgeon.”

“If He can do all things,” Mordechai responds bitterly, “why can He not purify His people without gassing them?”

There’s a lot of trenchant dialogue in “God on Trial.” And while the arguments (both for and against) are familiar, what’s new about them is the context, the realization that the victims must have debated them, too. Perhaps we, too, have felt a sense of betrayal about the Shoah — but from a distance. These characters have a stronger claim to a complaint, in the legal sense of the word. This authority — and a lot of good writing — makes “God on Trial” a cut above most made-for-TV movies. Plus, it (almost) avoids the usual Holocaust-movie shortcuts to bathos: Violence is present but not central, and there are no Spielbergian shots of children in distress.

Two performances are especially vivid portrayals of men under inhuman pressure. Skarsgård’s Baumgarten fights evident exhaustion to perform his final civilized act; Dillane’s Schmidt radiates a bruised, doleful intensity. Others, however, rely on a peculiarly British kind of hyper-articulate hamminess. In fact, even though the characters are Polish, French and German, the film itself often seems very British. This is understandable, as it’s a United Kingdom production with a mostly English cast, but the cultural anachronisms can be distracting. At confrontational moments, the prisoners of Auschwitz harrumph like Members of Parliament at Prime Minister’s Question Time.

And then there’s that opening. “God on Trial” actually begins in the present day, with unnamed characters on a tour of Auschwitz. Scenes of an earnest Polish guide and her perplexed group are intercut with scenes of the prisoners undergoing the vicious process of selection. Why? To make a point about the commoditization of Auschwitz? To show that in the 21st century there is money to be made from the 20th’s worst tragedies? Or to suggest something less obvious, perhaps about the (supposedly) indelible nature of historical trauma?

While this juxtaposition of historical eras is puzzling at first, when it returns at the end of the film, the message couldn’t be clearer. It wouldn’t be fair to reveal the verdict itself, but be warned: The final minutes of “God on Trial” are pure schmaltz, making for the kind of ending that will have one sort of viewer lunging for the Kleenex, and another for the remote. This is not to say that either reaction is “right” — only that for a film looking to avoid easy answers, the ultimate message of “Gold on Trial” is jarringly facile.

And what is the message? Nothing less than the Eternal Resilience of the Jewish People. Which we’re all in favor of, naturally. But there’s something disconcerting about the way that many of the characters are shown as relatively composed and pious as they pray within the gas chamber itself. It’s too stylized, this final minyan, too much a projection of how we hope that the real victims comported themselves. If we are to see them as the gas goes on, to “witness” that ugly truth, then why sentimentalize it?

That’s not all: Moche, Schmidt and the other prisoners are then shown naked from the waist up, standing unnoticed among the present-day tour group, still praying, gazing directly into the camera. This is a dubious choice. However well intentioned, it de-individualizes the characters, converts them into ciphers for another commonplace idea: that The Victims Are Still With Us.

Well, perhaps they are still with us, in the sense that we are still working through all the implications of the Shoah, and that the grotesque habit of genocide is still with us, too. But the message of “God on Trial” is not universal. The victims are seen strictly as Jews, not as people who happen to be Jews. There’s no attempt to point out that although the Jewish people are comparatively secure today, a lot of other folks — in Rwanda, Darfur, Congo, etc. — are still nervous.

Not that we should fault “God on Trial” for focusing on the genocide against the Jews. The more salient point is that the film is better when the prisoners are shown as individuals. Reducing them to symbols also reduces the impact of the film. And, without wishing to be unduly harsh, one could add that it also does a disservice to the actual victims.

Think of the survivor’s procession at the end of “Schindler’s List,” or the mother-and-child reunion in “Life Is Beautiful.” Admittedly, “God on Trial” is never that saccharine. Still, it is, like all Holocaust films, a product of the entertainment industry, which demands a happy ending, or at least with a bittersweet lesson.

In “God on Trial,” the trial itself is challenging and intelligent, but the film undercuts its advantages by straining for a silver lining. Why not be satisfied with granting these characters — and thus, by association, the real victims — their modicum of posthumous dignity? And why not remember that when bad things happen to good people, it’s not for our own edification?

*Gordon Haber is at work on a novel about the Jewish messiah. *