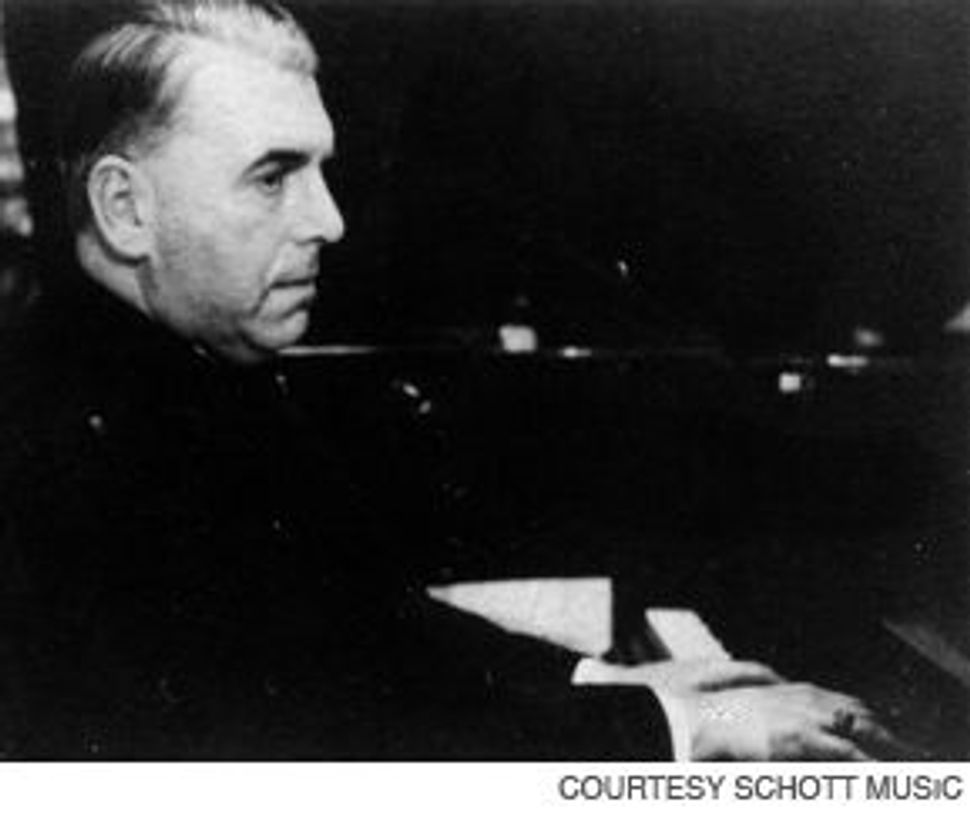 Concerts and CDs featuring composers who died during the Holocaust have become commonplace, with such once forgotten names as Viktor Ullmann (1898–1944), Pavel Haas (1899–1944) and Gideon Klein (1919–1945) receiving posthumous tributes. Yet these honors, sincere and well deserved as they undoubtedly are, tend to type composers and their music in the somber region of historical tragedy. They define a musician by the way he died, which was certainly not any individual’s artistic choice. No one would think of calling Johann Sebastian Bach a “stroke” composer or Robert Schumann a “syphilis” composer, yet involuntary death in a Nazi prison camp continues to define a generation of composers who deserve more individuated identifications. Weighty works by Bach, Beethoven, Brahms and Bloch were played at a November 9 concert in Berlin to commemorate the 70th anniversary of Kristallnacht, the violently antisemitic “Night of Broken Glass,” yet not every composer is suitable for such a highly charged occasion. 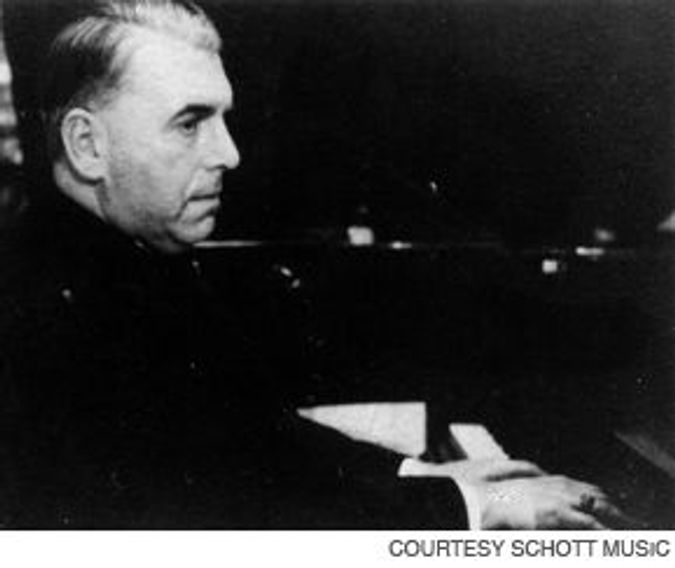 This irony is particularly glaring in the case of Erwin Schulhoff (1894–1942), born in Prague of German-Jewish origin. A superbly skilled pianist and composer, Schulhoff studied with Claude Debussy and Max Reger and was heavily influenced by jazz and the Dada movement. Schulhoff also embraced communism, even writing an oratorio in 1932, apparently still unrecorded, based on Marx and Engels’ “The Communist Manifesto.” By 1941, he had successfully applied for Soviet citizenship. That made him even less desirable as a newly minted alien in Czechoslovakia, and he was deported to the Wülzburg concentration camp in Bavaria, where he died of tuberculosis.

Part of the charm of Schulhoff’s music is the extreme joy that it expresses. His 1922 Dadaist work, “The Cloud Pump” (“Die Wolkenpumpe”) for baritone, piccolo-clarinet, bassoon, contrabassoon, trumpet and percussion, is a setting of a defiantly nonsensical text by poet Jean Arp: “Rose-grass it has deceived the swan it has lost the watershed it gathers no flowers nor feathers, it carries a little barrel of glass, etc.” Another Dada-inspired piano work, “In Futurum,” a movement from his “Five Picturesques” (1919), is a totally silent piece of music, preceding John Cage’s notorious “4’33” by more than 30 years. Unlike Cage’s blank musical score, Schulhoff confronts the pianist with a succession of wildly precise instructions, including rests of all sizes and durations, that nevertheless add up to unbroken silence for the listener. Moreover, Schulhoff admonishes the performer to play this soundless piece “with as much expression and emotion as you wish, continuously, right to the finish!”

As Schulhoff was more than a mere Dadaist joker, his typical expression and emotion gave his music an intensely celebratory, life-enhancing quality. Schulhoff wrote in 1921 to his close friend and fellow composer Alban Berg: “I have a tremendous passion for fashionable dances and sometimes I go dancing night after night with dance hostesses simply out of rhythmic enthusiasm and subconscious sensuality. This adds phenomenal impulse to my creativity, because my consciousness is unbelievably earthly, even bestial.”

How unjust it seems to reduce this throbbingly vital composer to a mass grave of dirgelike reverence. Yet until recently, the record industry has committed this blinkered gaffe to a dismaying degree. Last March, Deutsche Grammophon released an outstanding CD by Swedish mezzo-soprano Anne Sofie von Otter and others, “Terezin | Theresienstadt,” with music by composers like Ullmann and Haas, who had been interned in the eponymous Nazi concentration camp located in what is now the Czech Republic. Schulhoff’s music is also included, even though (fortunately for him) he never set foot in Theresienstadt, exemplifying the slightly muddled good intentions of some posthumous CD laudation of “Holocaust composers.” In the booklet note to “Terezin | Theresienstadt,” von Otter writes, with admirable resolve: “‘We must never be allowed to forget’ has been said many times before, but it must continue to be said again and again…. This project reflects my sincere wish to commemorate those who created music under conditions of unthinkable misery and who so tragically lost their lives.” Few would disagree, but such a presentation offers music as a grim, however praiseworthy, duty instead of an undiluted expression of joy.

Fortunately, other releases are beginning to put Schulhoff back on track toward being valued — and classified — among happier company. Accord, a subsidiary of Universal Music France, released a CD in April with the glamorous young French pianist Claire-Marie Le Guay playing two concertos by Maurice Ravel alongside Schulhoff’s “Concerto for Piano and Small Orchestra, Op. 43,” all conducted by Louis Langrée, who serves as music director of New York’s Mostly Mozart Festival. This fitting juxtaposition of concertos underlines Schulhoff’s identity, like Ravel’s, as a sophisticated, elegant jazz-age sensualist.

Similarly, the invaluable online CD reprint service, arkivmusic, has recently reissued a long-unavailable CD, “Concertos alla Jazz” from Decca’s 1990s “Degenerate Music” (Entartete Musik) series, devoted to composers killed or suppressed by the Third Reich. Although presented on this CD under the time-honored banner of somber historical indignation, Schulhoff’s works, especially in precious 1928 recordings of the composer himself at the piano, express salubrious, cool sassiness. In solo piano pieces like “Shimmy-Jazz,” “Charleston” and “Tango-Rag,” Schulhoff himself reveals an extraordinarily supple, seductive and communicative keyboard approach. A modern recording of another work, the “Double Concerto for Flute and Piano,” originally written as a performance vehicle for the composer and his friend, French flutist René Le Roy, enchants with Gallic effervescence. Like Ravel or Poulenc, this is music to be heard because it is delightful, not out of mere dogged conscientiousness. To adopt an expression used by Jean Cocteau to describe the liveliness of such 1920s compositions, these Schulhoff works are not “music to be listened to with your head in your hands.” Some works express anguish, to be sure, but as an oeuvre, Schulhoff’s is ill-suited to uniformly gray, respectful piety.

Schulhoff once wrote about the music of his compatriot Leoš Janáček’s: “It is so strenuous, intuitive, and unfabricated that it compels us not merely to lend an ear, but to live in it for the time being.” The same might be said of Schulhoff’s own works, which create a world that transcends the historical circumstances of his lifetime. In June, Hyperion reissued a CD with Schulhoff’s boisterous String Sextet. Schulhoff’s music is again given an apt pairing, with the composer’s compatriot Bohuslav Martinů (1890–1959), a non-Jewish composer who was also strongly influenced by jazz but happened to die of cancer, not from the Holocaust. Unsurprisingly, Schulhoff makes a more harmoniously musical match with Martinů than with many other “Holocaust composers” with whom he has previously been associated.

It is to be hoped that this new trend, discovering the inner qualities of Schulhoff, will continue. He deserves plaudits from posterity judged solely by the music he wrote, without any pity-party or sympathy vote trying to make him more worthy of our attention.