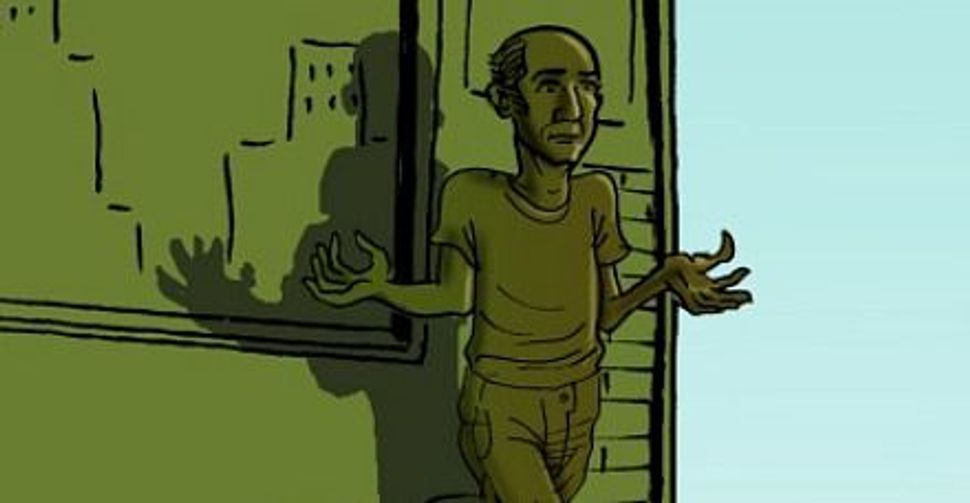 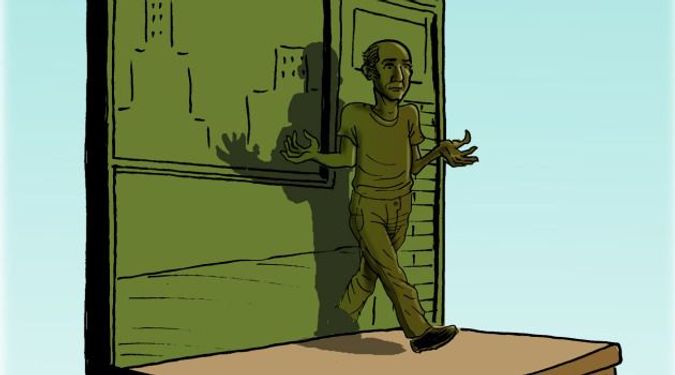 Comic Bronze: A planned statue of comic artist Harvey Pekar depicts him in a comic book page. That?s just how he would want to be remembered, says his widow, Joyce Brabner. Image by Rick Parker

Classical statuary dots Cleveland’s husky urban landscape. But there’s no tribute to “the ancient Jewish god of frumpy people,” as Joyce Brabner puts it. Now, the Cleveland writer and artist wants to change that. She recently launched a much-publicized Kickstarter campaign to fund a memorial to her late husband, comics pioneer Harvey Pekar.

Rather than a conventional homage, Brabner and sculptor Justin Coulter are planning a large bronze comic book page with Pekar’s shrugging figure emerging from the frame and a slate board on the back. “It’s a memorial that would encourage anyone and everyone to think about writing or drawing stories about themselves, about whatever they could imagine,” according to Brabner’s Kickstarter spiel. If Brabner can raise $30,000 by December 5, she’ll be able to fund the memorial. (As of 6pm November 22, Brabner had achieved her goal. — Editor’s note.)

It’s ultimately destined to reside inside the Cleveland Heights branch of Pekar’s beloved public library, opposite the library’s collection of graphic novels. Along with a depiction of a “schlubby” Pekar, the bronze slab — formatted like comics panels — includes such Harvey-isms as “Anybody’s life story is potentially the source of a great novel, comic book or movie.” And in smaller letters below that, in Yiddish: “Oy! What do you want from my life anyway?” — according to Brabner, “what he really would have said.” Harvey Pekar was also an inspiration to many of the artists in the Forward’s Graphic Details show, which I curated. When he passed away before he could complete a contribution to our catalogue, Joyce valiantly stepped into the breach. “Ghostwriting,” the cartoon on this page, is the result.

Michael Kaminer: What inspired the design of this memorial?

Joyce Brabner: It started as a reaction to these overzealous fans who have this feeling everyone in comics has to be glorified — everyone is a genius or a king. They wanted a statue of “our man.” This project is about his work, not the man. The urban landscape dominated him, not the other way around. Of course, if I had the money, the real memorial would be the Harvey Pekar Chemo Award or the Harvey Pekar Burn Unit for Kids. 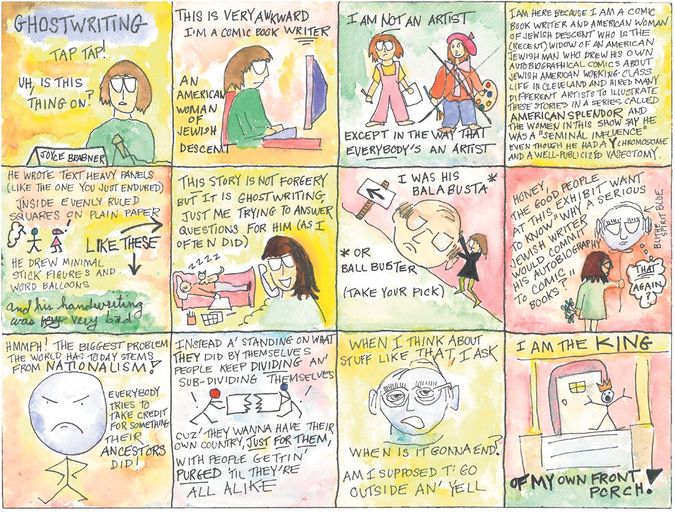 You’d originally planned it for the cemetery where Harvey’s buried. Now, it’ll have a home inside the Cleveland Heights public library branch. How did that play out?

We had thought of doing this at his gravesite; the idea included a slate board for people to write on. The cemetery people were nice but didn’t want to encourage writing on a gravesite. Next thing I know, this serious sculptor who’d admired Harvey heard what’s going on. And Friends of the Cleveland Public Library got involved. Moving from the cemetery to the library turned out to be wonderful. The memorial will face the area where all the graphic novels are shelved. It’ll rest on a desk where they can put special things inside the drawers, like [“The Moffats” (Eleanor Estes’ classic children’s series)][2], books he loved.

What would Harvey have thought of the statue?

He always trusted my judgment. He would have been furious if people were throwing out money to do a statue of him. Because that kind of ego-driven celebrity thing is not what he was about. But he loves the library, and these librarians. We’re both people who were saved by libraries. And he believed that comics should be acknowledged as art and literature. At the end of the day, with the shades drawn, I think he‘d give me a hug and say, ‘I really like those library ladies.’

You have your own body of very provocative and politically conscious work. What do you want your own legacy to look like?

Damned if I know. I’d be really happy if every single thing in my house —whether books, art supplies or canned goods — was used up until the very end. There are people whose lives were turned around because I’ve been involved with them. That’s what I take the most pride in. And in raising a kid most people had given up on. Right now, I just want to be writing and making art.