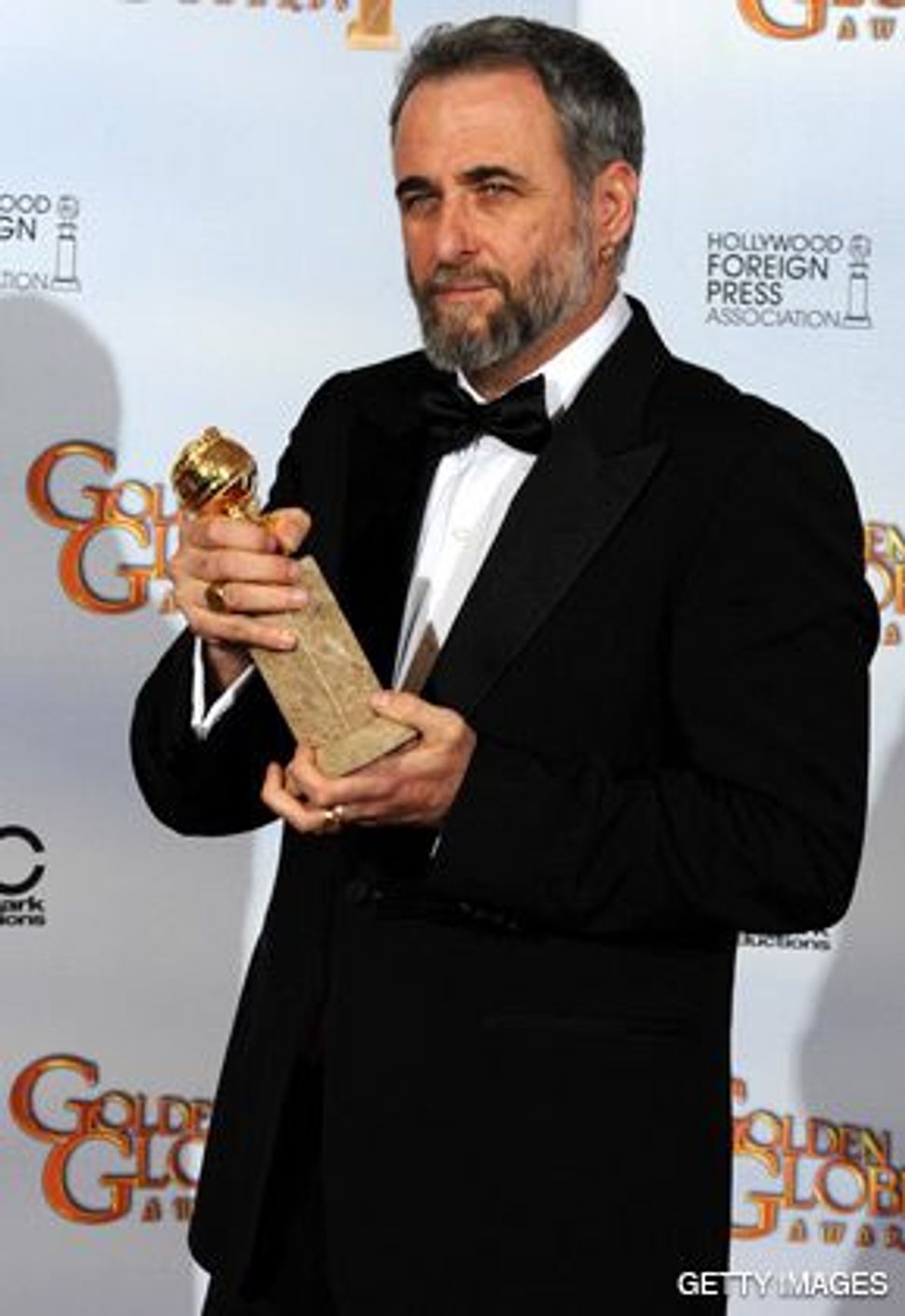 NEXT STOP, OSCAR: Ari Folman, the filmmaker behind the animated documentary ?Waltz With Bashir? with his Golden Globe award.

Despite eight nominations spanning 44 years, the Academy of Motion Picture Arts and Sciences has never bestowed its award for best foreign language film on an Israeli picture. Many expect that this will change this year at the 81st Annual Academy Awards, to be aired February 22, thanks to the nomination of “Waltz With Bashir.” In the animated documentary, which won the Golden Globe for best foreign language film, Israeli filmmaker Ari Folman tracks down fellow ex-soldiers to help him recall his experiences during the 1982 invasion of Lebanon and the massacre at the Sabra and Shatila refugee camps. Folman spoke from his home in Tel Aviv with Matthew Oshinksy, a Brooklyn-based writer, about Oscars, war and why animation was the only way to tell his story. 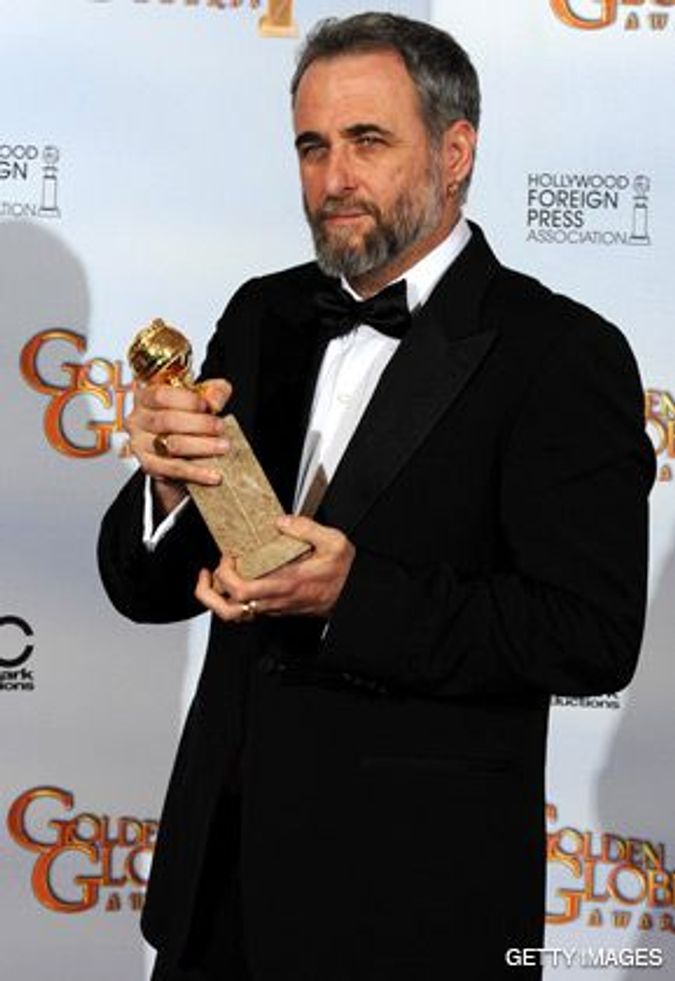 NEXT STOP, OSCAR: Ari Folman, the filmmaker behind the animated documentary ?Waltz With Bashir? with his Golden Globe award.

Matthew Oshinsky: As an independent filmmaker outside the Hollywood mainstream, what would winning an Oscar mean to you?

Ari Folman: It would be a cause of big celebration here, because Israelis are really obsessed with international awards. It will be, as much as it might sound like a cliché, an international event.

Do you see yourself as part of a tradition of Israeli filmmaking, or more as an autonomous artist?

I try to see myself as an independent filmmaker. I had to struggle a lot to make this project happen. When I started, I really had nothing at all — a few dollars and a crazy idea. But I am also part of the new Israeli cinema, which now reaches all over the world.

The animation in “Waltz With Bashir” is breathtaking. Were you hoping to be nominated for best animated film, or was it always going to be best foreign language film?

Animated movies are such a big market in America. Of course, I would have loved it, but it would have been very difficult to break through in that category. But I’m not complaining.

The film had a great run on the festival circuit in 2008, but that doesn’t guarantee box-office success. Has the subsequent wide distribution been a surprise to you?

Everything that’s happened with “Bashir” in the U.S. has been a great surprise. We launched the film in Cannes, got a big screening, then we took it through Europe and the U.K. But in the U.S., it’s been different. The film is judged less politically and much more cinematically.

Well, I was lucky that the distribution company that did all the promotion of the film in the U.S. knew exactly what they were doing. So we received a wider audience, and I think in the U.S. it was viewed as more than just a political film. It was a breakthrough in animation. That recognition was overwhelming. Also, I think Americans are less acquainted with Middle Eastern politics. They know less about the First Lebanon War than a guy in France. So the critics can deal more with the cinematic aspects, which is better for me. In each place the reaction is extremely different. In Europe, I think the screenings are much more emotional. For a lot of people, it opens old scars, things that they’d rather not talk about.

Some have called the use of animation to recount such a violently true story “too shocking.” Others say “not shocking enough.” What, in the end, was the effect of the style on the audience

The film would never have been done if it was not animated. Animation was simply the only artistic way for me to tell this kind of story. It gives you freedom to go from real stories to dreams, hallucinations, to the subconscious. After that, defining the film or categorizing it is beyond my mission as a filmmaker. I give respect to any kind of categorizing of the film by audience or critics. I finished my work the minute the film was screened, you know? Someone else could have imagined it done differently, but I couldn’t.

Did you always feel that you had a story to tell about your experience in the Lebanon War, even if you weren’t sure exactly what it was?

It really just hit me. After I made my previous film [“Made in Israel”], I was interviewed in a British newspaper, and I was asked, “Why don’t [you] ever think of doing a film about my experience in the Lebanon War?’ And I said, ‘I would never spend one day of life doing that.”

So your inability to remember much of what happened there and how you were connected to it was, in some sense, deliberate?

Speaking of memories, the film makes a point to question their reliability. Is there any danger in using traumatic memories to help explain an event that many viewers may not be familiar with?

When we started, there were discussions about putting title cards up in the beginning of the film — in America, for example — to give more reference for the audience: what the story is all about, where it takes place, who were the parties involved. But the more I got into making the film, I realized I didn’t need to do it, because it doesn’t really matter if you know the details or don’t know the details. The story is very personal, but in a way it’s also very universal. It could have been written by an ex-American soldier in Vietnam or a current American soldier in Iraq. You don’t need to know the map of exactly where it happened, or whether it was the beginning of the ’80s or the middle of the ’80s. It doesn’t really matter.

So the specific conflict is less important than psychological and personal elements of what happens in any violent conflict?

Does that also apply to the current situation in Gaza?

“Bashir” is a pure anti-war statement, without making distinctions between justified wars, unjustified wars. It’s a story of what war looks like when you’re there.

It’s also a story of catharsis, and coming to peace with the past. Were you successful in that goal?

Very successful, on the very simple level of being more connected to the guy I used to be when I was 19 years old. Now he is part of me, and I live with it, and this is it. It’s life.