Spielberg’s Portrait of Lincoln Is A Bust 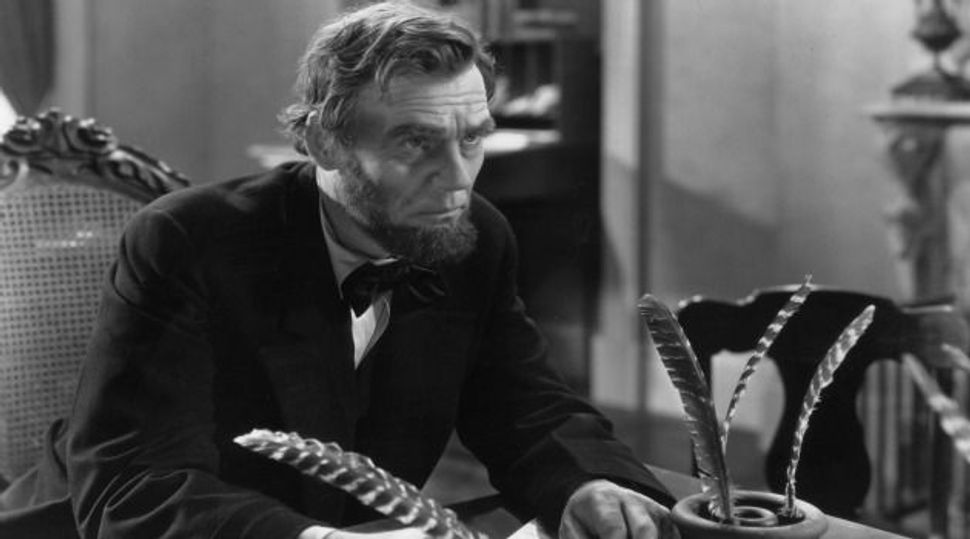 Lincoln in Black and White: Steven Spielberg fails to strip away the myths surrounding Abraham Lincoln. Image by Getty Images

My suspicion that Steven Spielberg can’t really do historical films isn’t anything new, although the fact that he keeps trying shows at least how ambitious he can be. Conversely, the fact that he keeps failing, at least in my opinion, may point to a wider incapacity on the part of his audience, meaning you and me — a failure to grasp and sustain Abraham Lincoln as a myth the way that John Ford and his audience could when Ford made “Young Mr. Lincoln” with Henry Fonda in 1939.

Some of this, of course, can be accounted for by the radical changes in mainstream film-going over 73 years: an audience that has been subdivided by targeting strategies and ancillary markets, reduced mainly to kids, artificially inflated by advertising budgets and split among homes, computers and theaters on screens of different sizes, shapes and textures. But it’s also a sign that in “Lincoln,” we’re much further away from our historical roots than American moviegoers were in 1939, even when a master storyteller and myth-spinner is in charge.

Leaving aside “The Adventures of Tintin” and “War Horse” (neither of which I’ve seen), the diverse cavorting of Indiana Jones and the cartoon extravagance of “1941,” I think my troubles with Spielberg as a historian started with his ignorance about Jim Crow prohibitions in the Deep South involving the front seat of a car in “The Color Purple” (1985). And they weren’t exactly mitigated by “Empire of the Sun” (1987), which includes the boy hero’s glimpse of an A-bomb blast in a Japanese prisoner-of-war camp without bothering to clarify whether this comes from Hiroshima or Nagasaki. (In J.G. Ballard’s novel, it’s clearly the latter.) Maybe this is because narrative clarity and fluidity always count for more with Spielberg than historical precision — which is also perhaps why the character of Emilie Schindler, who played a major role in saving Jewish lives, gets skimped in Spielberg’s version of “Schindler’s List,” a film that focuses almost entirely on her husband, Oskar. More generally, it might help explain why (and how) Spielberg correctly calculated that the easiest way to get a young audience interested in the Holocaust was to get the people to identify first with a glamorous and handsome Nazi war profiteer.

I don’t mean to disparage Spielberg’s storytelling gifts, only to suggest that they often depend on a ruthless catering to what we already think we know about a given subject. Significantly, his rationale for shooting “Schindler’s List” in black and white —“Virtually everything I’ve seen on the Holocaust is in black and white” — presupposes a determination to honor our unconsidered prejudices. So when it comes to Abe Lincoln, this necessarily means not stepping too far away from the audio-animatronic version in Disneyland, which is arguably what many of us already have to start with, crossed a bit with the equally archetypal Uncle Sam. Daniel Day-Lewis, who plays Lincoln and who definitely knows how to hold the screen, certainly does a lot with this familiar tent-pole image; how far he’s allowed to transcend it is another matter. At best, he carries the folksy side of Honest Abe, periodically evoking Will Rogers, about as far as it can be taken — even into the realm of a historically authenticated outhouse joke that Lincoln liked to tell, about a portrait of George Washington hung inside a privy.

But whenever Day-Lewis is required to take on other Lincolns, such as the beleaguered family man, the role seems to split into separate characters rather than deepen into a single multilayered one. Spielberg’s daring enough to show us a Lincoln who can shout at his wife, Mary (Sally Field), and slap his son, Robert (Joseph Gordon-Levitt), and one who occasionally drives even his devotees batty with his habitual anecdotes. Spielberg also makes the startling and interesting decision to exclude Lincoln’s assassination from his story (while including his death). But he can’t give us a Lincoln either stripped of myth or enhanced by further myths.

The problem is the ideological baggage Lincoln carries and its competing agendas. He has been appropriated by both the left and right over nearly a century and a half, for idealistic as well as cynical purposes. It isn’t accidental that this film was set to be released only after the presidential election. The relation of Lincoln’s Civil War to the one currently plaguing this country — less geographically based and more culturally oriented, but no less divisive — is, while far from simple, hardly irrelevant.

Prior to the 2008 presidential election, comparisons made between Lincoln and Barack Obama — humble origins, skinny frame, the desire to preserve the Union — were somewhat harder to dismiss. Now, the sharper distinctions, such as Obama’s less developed social skills, and reflexes that are less Machiavellian, tend to make such comparisons harder to float, but this doesn’t mean that they’re no longer pertinent. Indeed, one telling indication of how much our myths can change over a short period is how Obama started off as a political figure who suggested racial and international harmony (and the abolition of slavery associated with Lincoln), the reason being that he had a white American mother and a black African father, and then became a political figure identified in the United States as black (half-accurate) and/or Muslim (totally inaccurate). Both myths are questionable, but they’re hardly mythical or dubious in the same fashion.

“Based in part on ‘Team of Rivals: The Political Genius of Abraham Lincoln,’ by Doris Kearns Goodwin,” the final credits say, and “in part” is the operative term here. Indeed, out of Goodwin’s title team of former (and in some cases continuing) political rivals, whom Lincoln appointed to his Cabinet — William Henry Seward as secretary of state, Salmon P. Chase as secretary of the Treasury, Edward Bates as attorney general — Spielberg’s “Lincoln” retains only the first, casting David Strathairn in the part. On the other hand, Thaddeus Stevens, introduced on page 302 of Goodwin’s 916-page book as “the fiery abolitionist congressman from Pennsylvania” and played here by Tommy Lee Jones, receives only three fleeting references after that, but in Tony Kushner’s screenplay for Lincoln he figures as a major player, and in terms of quotable lines and all-around Oscar-mongering he clearly comes in second after the title hero.

Juicy characterizations aside, I think that part of what keeps “Lincoln” so far away from any mythical past I can believe in is a form of political correctness that often resembles petrification. It’s so hot and bothered about getting things wrong that it can’t find many ways of getting things right. For starters, most of the black characters in this story — including the private and corporal Union soldiers, both apparently fictional, who are shown in the first scene meeting Lincoln and then proudly quoting him — are plainly 20th-century figures in speech and body language, not inhabitants of the 19th century. And more generally, and more damagingly, the obvious effort of Spielberg and his cinematographer, Janusz Kaminski (who also shot “Schindler’s List’), to be mythical in almost every shot is far more rhetorical and hectoring than Ford (or Sergei Eisenstein, for that matter) ever was, especially in terms of the lighting, which sinks this movie’s interiors into the darkest gloom imaginable, the abject condition that James Agee once described as rigor artis.

Surely Lincoln and his cohorts didn’t experience their everyday surroundings as if they were silhouettes in a pretentiously underlighted art movie, but this Lincoln and these cohorts do. It’s obvious that some form of symbolism in which darkness equals slavery and light equals emancipation is at work here — so that the light pouring through the window of Lincoln’s office just after the House of Representatives passes the 13th Amendment is made to seem like some sort of divine orgasm. But since actual slavery and actual emancipation aren’t really depicted in this movie, only bandied about as abstractions, an abstract and clichéd visual design seems woefully appropriate.

This is preceded by the movie’s only real set piece: the suspenseful and climactic House of Representatives roll-call vote on the amendment. Spoiler alert: Slavery does get abolished. And this does allow Thaddeus Stevens to reward us with an epiphany of sorts that I won’t divulge. But the fact that Ulysses S. Grant (Jared Harris) is shown following the count vote by vote while Lincoln himself is too austere to be shown engaged in such a vulgar activity is painfully indicative of the film’s approach.

Ironically, this comes after the film has devoted much of its running time to demonstrating how Lincoln had to lie and scheme in order to get the votes for that amendment — one of the points made by Kearns, as well as by Gore Vidal in his novel about Lincoln. Kearns and Vidal both maintain that this president was ultimately more pro-Union than he was anti-slavery. These writers also view their subject largely through the viewpoints of others who helpfully kept diaries or wrote more letters than Lincoln did: Vidal does his best to tweak and confound our more idealized notions about the man, and Kearns does more to accommodate at least some of those notions. But both authors, as scholars, are ultimately more concerned with how we think about Lincoln than how we feel about him. Spielberg, as usual, is more concerned with how we feel, and the factual material can only provide him with mixed signals.

Spielberg showed in “Saving Private Ryan” that whenever he had to combine contrary points of view about this country into something palatable as well as marketable, shots of the American flag waving in the wind remained the easiest way to drown his contradictions in torrents of rhetoric. Trying this time to combine revisionist details with familiar images of Lincoln as well as with an allegorical lighting scheme, he fails to find any equivalent form of unifying rhetoric. “Lincoln” remains at war with itself, seesawing relentlessly between the image of the clever conniver who knew how to manipulate others, which emerges from his contemporaries, and the inscrutable anti-slavery demigod brooding alone in his chambers, the quasi-religious image that we already had of a martyred saint. As long as the saint looks familiar and the lighting remains dark, maybe we won’t notice that such a composite portrait doesn’t add up to a single individual.

Jonathan Rosenbaum’s most recent book is “Goodbye Cinema, Hello Cinephilia: Film Culture in Transition” (University of Chicago Press, 2010). Many of his writings may be found on www.jonathanrosenbaum.com.

Here’s the trailer to Spielberg’s “Lincoln.”

Spielberg’s Portrait of Lincoln Is A Bust