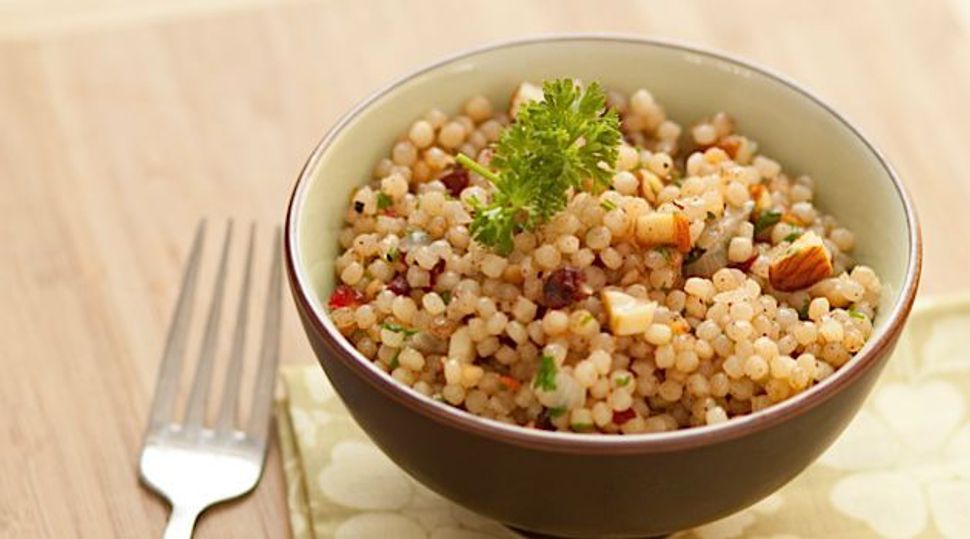 ?Tis A Farfel Farfel Better Thing: For a time, what we call Israeli couscous was known as ?Ben-Guron rice.? Image by Thinkstock

On a recent visit to New York, I was handed a menu in a restaurant, on which appeared the entree “Blackened salmon on a bed of Israeli couscous.” “Blackened” I knew; that’s slightly charred in a spicy sauce. But what was “Israeli couscous”? I’d lived in Israel for more than 40 years and never encountered such a thing.

It’s always been my philosophy that if you see something new on a menu, you find out what it is by ordering it. I ordered blackened salmon with Israeli couscous. The salmon was delicious. The “Israeli couscous,” on the other hand, wasn’t new at all. Nor was it couscous. It was what is known in Hebrew as p’titim, and I must have eaten it at least 100 times.

Couscous is a North African dish composed of grayish pellets of grain (most commonly, semolina, a refined form of the durum wheat used for making pasta) that are slowly steamed over a stew of vegetables and/or meat until they fluff up and absorb the stew’s flavor, after which they are served with it on top of them. Of Berber origin, the word “couscous” is also used for the pellets themselves, which are traditionally made by a laborious method of wetting semolina flour with water, adding a bit of oil and rolling the mixture between the fingers into little balls. Nowadays, though the purists frown on it, there is also prepackaged couscous, which is steamed beforehand and needs only to be scalded with hot water in order to be ready to eat.

P’titim — the word means “flakes” in Hebrew — have the form of pellets, too, but they are a type of pasta, which is to say that they are made of flour mixed with water and egg yolk and then dried and stamped or grated into shape. Like other pasta, they are cooked by boiling and eaten with sauce or gravy. Generally served as a side dish, an accompanying starch that, like rice or potatoes, goes with a main course, they are similar to the farfel of Eastern European Jewry.

How did they come to be called “Israeli couscous”? Thereby, I discovered, hangs a tale. When the mass immigration of Jews from Middle Eastern countries arrived in Israel in the early 1950s, which were years of economic austerity and food rationing, one of the newcomers’ complaints was that they could not obtain the rice that was a staple of their traditional diet.

Seeking a solution, the story goes, Prime Minister David Ben-Gurion turned to Eugen Propper, a founder of the Israeli food concern Osem, and asked him to develop a mass-producible rice substitute. The European-born Propper thought of farfel, and Osem began to manufacture white, rice-shaped grains of it that were given the commercial name of p’titim and popularly known as orez Ben-Gurion, “Ben-Gurion rice.” Israeli cookbooks of the period, which were largely designed to help housewives cope with a shortage of food without starving their families or boring their taste buds to death, had numerous creative ideas for what could be done with the invention.

Time passed, austerity was over, real rice was now readily available and Osem decided that p’titim would be better marketed in rounded, farfellike pellets rather than in elongated, ricelike grains. By now, they had become part of Israeli cuisine, a food that could be served with almost anything and would obligingly soak up whatever was poured on it. Mothers liked it for its quickness, children for its blandness, the toothless for its softness, and no restaurant dreamed of putting it on its menus.

Cut to the early 1990s. One evening — so the story continues — the Israeli chef and cookbook author Mika Sharon, then living in New York, hosted the American chef and cookbook author Don Pintabona for dinner. On the stove was a pot of p’titim that Sharon had made for her small daughter, and Pintabona, who had a cheffy habit of poking around people’s kitchens, stuck his hand into the pot and from the pot into his mouth.

It is not recorded whether he said “Yum!” or “Hmmm! This might go better with Hungarian goulash than fettuccine,” but before long he was serving p’titim, relabeled by him “Israeli couscous,” in his New York restaurant. The rest is history.

There’s a lot of earlier history, too. Farfel, sometimes called “egg barley” in English because of its physical resemblance to pearl barley, has been around for centuries. (Pearl barley is processed barley with the hull and bran removed, as opposed to barley groats, which retain the bran.)

The Hungarians, who indeed do eat their goulash with p’titim, call them tarhonya, a word deriving from Turkish tarhana, a dish of dried curds and pearled wheat that originated in Iran. The Sardinians eat something called fregola, which you might also think was invented by Osem if you didn’t know better; the Palestinians have their maftoul, and the Lebanese their moghrabiyeh. P’titim aren’t couscous, and they’re not particularly Israeli, but there’s no denying they go well with blackened salmon.