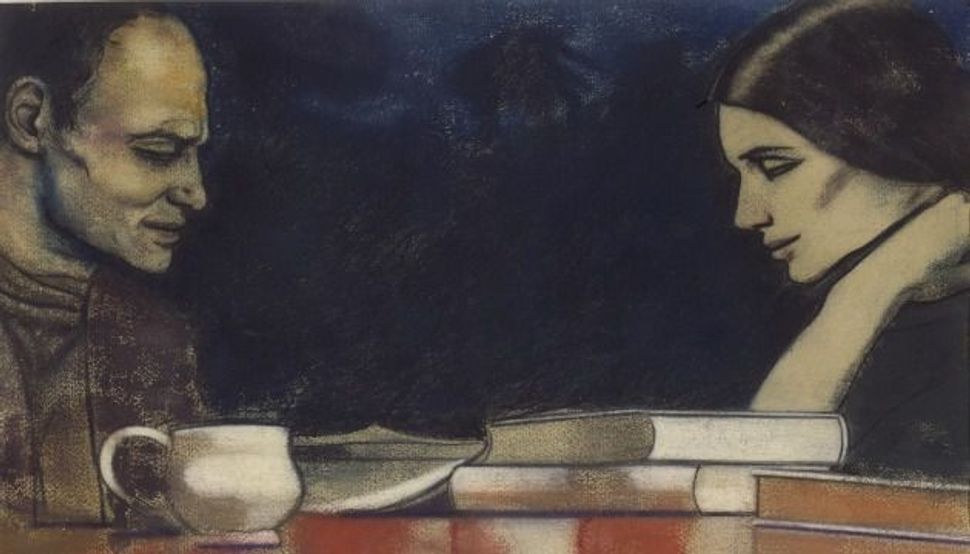 For The Benefit of Mr. Kitaj: The artist?s ?Two London Painters? is on display as part of the Jewish Museum?s retrospective. Image by Courtesy of Jewish Museum of Berlin

‘Jewish cultural life with all its disasters, brilliance, learning, evasions and daring has conducted me and my art like an excited zombie or Golem,” the painter R.B. Kitaj wrote in a commentary to his early painting “The Murder of Rosa Luxemburg,” a stark collagelike canvas named for the Jewish revolutionary leader who was assassinated in Berlin in 1919. At his first solo show, at the Marlborough Fine Art Gallery in London in 1963, Kitaj simply presented the work as a history painting; 30 years later, he reinterpreted the assassination as foretelling the mass murder of European Jews and dedicated the work to the female victims of the Holocaust.

“Rosa Luxemburg” is one of the first works that greet visitors to “Obsessions,” the Berlin Jewish Museum’s excellent retrospective of the Ohio-born artist Kitaj, who spent most of his career in London and committed suicide in 2007 at the age of 74. The show, which runs until late January before moving on to London and to Hamburg, Germany, brings together more than 130 paintings and graphic works, culled from museums and private collections in Europe and America, as well as from the artist’s estate and archive. The works are displayed throughout 10 themed rooms. Curated by Eckhart Gillen, it makes a compelling argument for Kitaj as a radically Jewish painter and a master of outsider art.

While such qualities have long been evident in Kitaj’s work, this exhibit is noteworthy for using the artist’s absorption in Jewish themes as a point of departure. “This is the first time that Kitaj’s work isn’t being looked at simply in terms of form and color, but rather we’ve provided access to his main project. It’s essential to get a view into Kitaj’s Jewish identity,” explained Margret Kampmeyer, an art historian who worked as the project manager for the exhibition.

Kitaj is not a household name in Germany, Kampmeyer explained, adding that she herself had little more than a passing knowledge of Kitaj as a figure associated with the London School — a term he coined in 1976 to describe the circle of figurative painters that included Francis Bacon, Lucian Freud, Leon Kossoff, Frank Auerbach, Michael Andrews and Kitaj himself — and with Pop Art.

As the first retrospective to be mounted without the direct input of the artist, “Obsessions” includes early works that Kitaj came to dislike in his later years, providing a fuller portrait of the artist than has been the case in previous exhibitions. Kampmeyer related that the artist David Hockney, a lifelong friend of Kitaj’s, visited recently and remarked that he had never seen such a full range of his contemporary’s work.

This exhibition pivots on the centrality of Kitaj’s “Jewish question,” which the artist formulated as “my limit-experience, my romance, my neurosis, my war, my pleasure principle, my death drive.” The exhibit’s second room features canvases that were inspired by trips to Catalonia in the 1960s, when Kitaj’s acquaintance with figures in the movement for Catalan independence fired his own interest in questions of Jewish identity. He came to understand the essential Jewish condition as one of “Diasporaism,” of living between cultures and nations, never fully belonging anywhere, but internalizing the influences of disparate traditions. For Kitaj, Jewish art blurred established boundaries and was self-referential and reminiscent of a mosaic. Anticipating his critics, Kitaj wrote that diasporic art “can be inconsistent, which is a major blasphemy against the logic of much art education, because life in Diaspora is often inconsistent and tense.”

Kitaj’s paintings can be surreal, uncanny, phantasmagorical or breathtakingly beautiful. His bright palate often suggests Max Beckmann and Franz Marc, while his dynamic technique of representing bodies in space brings to mind his fellow London artists Francis Bacon and Frank Auerbach. Kitaj was a passionate cinemagoer and references from classic films are as likely to appear in his works as allusions to Degas (whom he called his “favorite anti-Semite,” along with Ezra Pound), Giotto, Uccello, Rubens or Manet.

Kitaj’s pictorial universe is populated by dramatis personae of “rootless cosmopolitans,” to use a popular anti-Semitic slur from the 19th century. Kitaj vis-à-vis his real and imagined friends is one of the show’s main narratives. In the former category belong many of the school of London artists, Philip Roth (who allegedly based the protagonist of “Sabbath’s Theater” on the artist), the philosopher Isaiah Berlin and even Rabbi Adin Steinsaltz. In the latter belong Walter Benjamin, Kafka and Freud.

Kitaj considered Benjamin the consummate diasporist and painted the philosopher into “The Autumn of Central Paris,” under the awning of the famous cafe Les Deux Magots, which, sadly, is seen in this exhibit only in reproduction. Kitaj, an avid frequenter of cafes, felt a kinship with Benjamin and the intellectual circle at Berlin’s storied Römanisches Café. Benjamin appealed to the artist’s sense of perpetual exile. The obsessive chronicler of a fragmented world, Benjamin committed suicide in 1940 while trying to escape from occupied France.

Kitaj was an avid commentator on his own work. In an age that affirmed the autonomy of art, Kitaj’s exegesis was decried as self-indulgent and amateurish. There is little written text accompanying the exhibit, but you can read selections from Kitaj’s commentaries in an accompanying booklet, or listen to excerpts of Kitaj describing his work on the audio guide. Kitaj connected his penchant for commentary to the Jewish exegetical tradition and, as a response to critics who found his style obtuse, replied, “That’s Diasporism, which welcomes interesting, creative misreadings.”

Kitaj thus situated himself inside a tradition that elevates interpretation to the level of authority. It was this aspect that was most to blame for the cataclysmic reception of his 1994 Tate Gallery retrospective, which featured Kitaj’s extensive commentaries hanging as wall texts. He went into personal, if not professional, decline after the show, which critics branded with such epithets as “fake,” “narcissistic” and “shallow.” Kitaj, who always worked together with curators, had a hand in hanging the Tate show. Some, including Kitaj himself, attributed the bashing to anti-Semitism.

The last major section of the exhibit takes up this debacle, which Kitaj dubbed “The Tate War.” The main image here is “The Killer-Critic Assassinated by his Widower, Even,” a grotesque large-scale oil and collage that shows a monstrous head representing the London critics being shot at by Kitaj, whose body is adorned with the Hebrew letter kuf, and by Eduard Manet, after whose 1869 canvas “The Execution of Emperor Maximilian” Kitaj modeled his painting. It’s a terrifying and ugly work from an artist who never recovered from an assault that he perceived as unfair, one that he blamed for the sudden death of his wife from a brain aneurism two weeks after the show closed.

One of the exhibition’s few missteps is the choice to provide a glimpse into Kitaj’s studio via illustrated tables. While a visitor can easily ignore them, they nevertheless provide a somewhat chintzy touch to an otherwise elegant presentation. Another slip-up is the poorly edited English edition of the exhibition catalog. Its most amusing typo refers to the Early Italian Renaissance painter “Frau” Angelico.

In the 12 years since Berlin’s Jewish Museum opened its doors, “Obsessions” is hands-down the finest show it has ever organized. As one of Berlin’s most visited tourist attractions, the museum has too often rested on its laurels and given short shrift to its special exhibitions: The museum’s curators simply don’t need to exert their energies on putting together ambitious exhibitions, seeing as they are guaranteed throngs of visitors to its spectacular Daniel Libeskind-designed building and its mediocre permanent collection. Here’s to hoping that the museumwill be emboldened by this success to present further important and provocative shows.

A.J. Goldmann lives in Berlin and writes about art and culture. He is a regular contributor to the Forward.