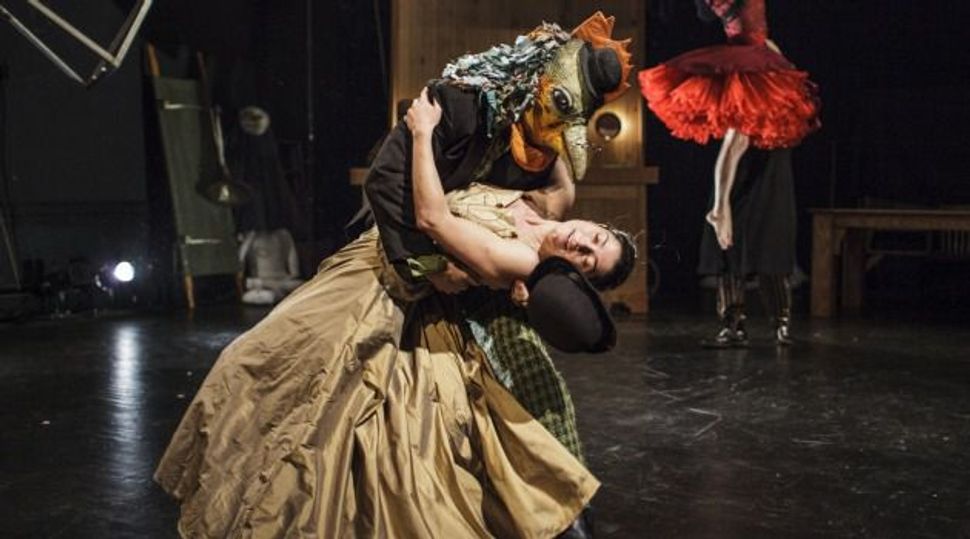 A Beak Into The 20th Century: Performers from the Ashfield, Mass. company Double Edge perform a scene from ?The Grand Parade.? Image by Courtesy of Arena Stage

A woman swathed in scarlet tulle dangles upside down, like an exhausted circus acrobat, gripping the bars of a swaying steel prism. Alongside her floats a bride — a trapeze artist in flowing white silk. A cow-headed man in a gray suit hangs on as if for dear life. The images recall the work of 20th-century painter Marc Chagall, with his floating lovers, animal-headed men and fiddlers atop shtetl roofs. This striking theatrical picture opens “The Grand Parade (of the 20th Century),” which blends movement theater, dance, puppetry and an eclectic musical score to create a sort of historical pageant that is highly influenced by Chagall.

Part spectacle, part history lesson, with more than a touch of “Antiques Roadshow” and Cirque du Soleil thrown in for good measure, “The Grand Parade” is being performed by Double Edge Theatre, an Ashfield, Mass.-based performance troupe that is premiering the work in February at Washington, D.C.’s Arena Stage.

Double Edge devises its fanciful works — often over a period of a year or longer — in a barn in rural Western Massachusetts, under the leadership of its founder and artistic director, Stacy Klein. “The Grand Parade” is the last part of a quartet of works inspired by Chagall’s paintings.

Baltimore-born Klein says that she was first drawn to Chagall in the late 1980s, while the company was working on “The Song Trilogy,” which attempted to dramatize 1,000 years of European Jewish history.

“That piece was a cycle about the Jewish Diaspora,” Klein said, “and it’s when we started seeing Jewish life as a kind of magic realism.” For Klein, Chagall, often regarded as the quintessential Jewish painter and beloved for his colorful and storied reflections of Eastern European Jewish life, captures both the mundane quality and the magic of the now-lost shtetl era. “We looked through his art and found his sensibility interesting: that juxtaposition of the daily and the imaginary; the wit, like the flying brides, or animals, like cows and chickens,” Klein said.

“The Grand Parade” wrestles with memory, inviting viewers who recall key events of the 20th century, either through history or through lived experience, to return vicariously to the past. On a stage cluttered with the detritus of the 20th century, and through the apt manipulation of props such as a cart, boxes, planks and ropes, the actors seamlessly build and disassemble uncanny living tableaux of airplanes, tanks, the Russian Revolution, rockets and a midcentury suburban kitchen. Klein views the objects littering the stage as representative of important ideas, historical moments and iconic pop culture.

“Somehow we might be losing our memory,” Klein said about the American knack for always seeking the new and innovative, and forgetting the value of the past. “Our idea — going through the whole century — makes us consider what is memory, what do we want to remember, what do we need to remember and what are things we can let go of.”

Although all her works carry an imprint of her Jewish cultural background, memory, to Klein, is a particularly Jewish concept. Cultural memory has been a key to continuity of the Jewish people for millennia. That’s why Klein hasn’t shied away from depicting images of the Holocaust: a yellow star pinned on an overcoat, corpses piled on wagons, children separated from parents.

While “The Grand Parade” views the 20th century through an American perspective, following the run at Arena Stage, the players of Double Edge will perform their work in Moscow. Klein says that, for the most part, the work should translate easily to a Russian audience. “It is the American sensibility, but Russians know their history,” Klein said.

The work of Chagall, however, might be less familiar. “Chagall is practically unknown in Russia,” Klein said she learned on a trip there in 2009. “If you go to the major museums [in Russia], there’s no Chagall in them.”

“The Grand Parade (of the 20th Century)” plays at the Arena Stage from February 6 to February 10.