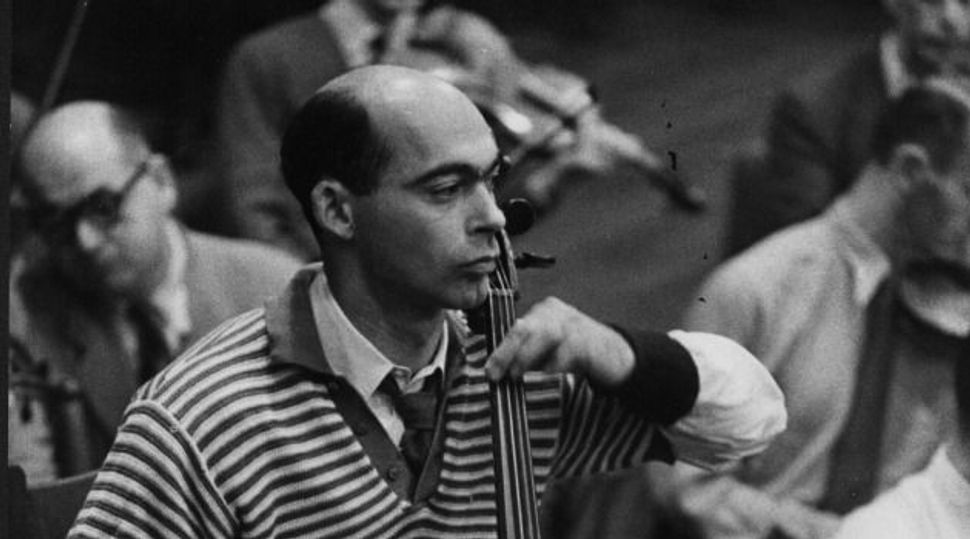 Having survived a Nazi internment camp during World War II, Hungarian Jewish cellist János Starker (1924-2013) led a life focused on civic contributions and behaving with utter freedom. Starker, who died in Indiana on April 28 at age 88, witnessed some of the worst horrors of modern history, and was determined to devote himself to constructing the future. He and his parents, of Polish-Ukrainian Jewish origin, survived their imprisonment, but his two older brothers Tibor and Ede, both accomplished violinists, were murdered in Nazi labor camps.

Starker’s notion of free behavior included a lifelong habit of consuming quantities of whiskey and cigarettes, neither of which impeded his ferociously concentrated playing. It also embraced free speech, even when the expression of his musical taste might wound students or established colleagues. In 1950, when playing in the Metropolitan Opera Orchestra, he accused the conductor Eugene Ormandy, a fellow Hungarian Jew born Jenő Ormándy-Blau (1899-1985) of not knowing the score of the work being rehearsed, Johann Strauss’s “Die Fledermaus.” In the decades which followed, Starker was never invited to perform with Ormandy and his Philadelphia Orchestra. In 1951, when a committee of players from the New York Philharmonic suggested that Starker might audition to replace the American Jewish principal cellist Leonard Rose, who was leaving to concentrate on a solo career, Starker refused, suggesting that the Philharmonic’s maestro, Dimitri Mitropoulos, should already be familiar with his playing. Only after decades passed was Starker finally invited to make a belated Philharmonic solo debut.

Even as a senior citizen, Starker’s dark tone, but spare vibrato in Kodály and Bach could be of terrifying tensile beauty, so athletic that a track suit might have been more suitable attire than a tuxedo. His deadpan face, in the tradition of Jascha Heifetz, was a clear statement against stagy histrionics; there was never the slightest drop of schmaltz in a Starker performance. He repeatedly dismissed most performing musicians as “dilettantes,” not just because the quality of their performances varied from day to day, but because they could not analyze the exact cause of such variations.
Starker himself was a methodical seeker for perfection, which he indeed accomplished, by a mixture of absolute confidence and patient self-abnegation. Despite his virtuoso status when he arrived in America after the war, he chose to work as an orchestral musician, in order to learn from conductors, including such terrifying martinets as Fritz Reiner and George Szell. After his solo career, which led to over 150 recordings, finally took off in 1958, Starker still considered himself primarily a teacher.

From his experience as a Holocaust survivor, Starker felt a duty towards posterity, and did not consider his recordings and filmed performances to be sufficient examples for musicians and audiences of the future. Since Starker had coached fellow student musicians since the early age of eight in his native Hungary, his natural choice was to spend decades teaching, where his uncompromising and sometimes harshly judgmental standards could have a devastating effect on unprepared students. One such student, the Frenchman Henri Demarquette, once told “Le Figaro” that Starker had an “anatomical, quasi-surgical knowledge of the human body.” He applied this knowledge with what some considered to be a “Type A” personality, mercilessly deconstructing students if he disapproved of their playing, taking them apart and (ideally) rebuilding them. His approach worked insofar as many of his devoted students graduated to become principal cellists in the Boston, Cleveland, Met, and other leading symphony orchestras.

A cellist of such fierce elegance and accomplishment has probably not been heard since the great – and equally temperamental – Jewish virtuoso Emanuel Feuermann (1902–1942), who died prematurely. Music lovers are fortunate that despite the whiskey and cigarettes, Starker remained with us for such a surprisingly long time.