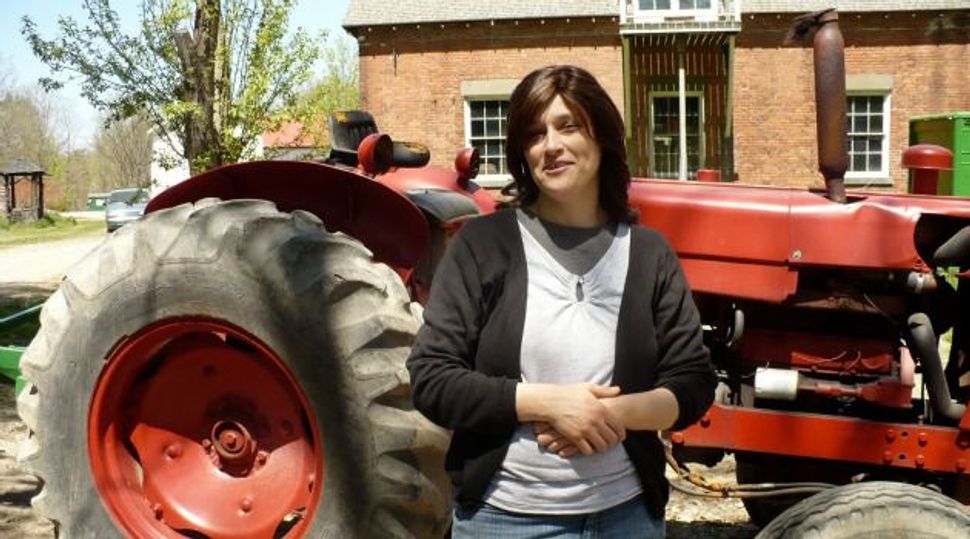 The Astor Orphan: The memoir of Alexandra Aldrich tells of growing up on John Jacob Astor?s Rokeby estate. Image by Jon Kalish

Rokeby is an estate along the Hudson River that was built nearly 200 years ago by relatives of John Jacob Astor, America’s first multimillionaire. About two dozen people currently live in various buildings spread out along the 400-plus acres of rolling hills. But the 43-room stucco mansion at Rokeby) is occupied by a handful of people who are 10th-generation descendants of the original occupants.

Given that these are members of one of America’s elite WASP families, you wouldn’t expect to find a portrait of the Chofetz Chaim hanging on the wall of a bedroom on the third floor. For the uninitiated, the Chofetz Chaim was a 19th-century Polish rabbi known for his teachings on lashon hora, or evil speech. Many Orthodox Jewish homes have stickers or magnets with a picture of the Chofetz Chaim and the warning, “Don’t speak lashon hora on the telephone.” But what, pray tell, is The Chofetz Chaim doing at Rokeby? And who brought him there?

Was it the lady of this manor, Polish-born Ania Aldrich, who grew up Catholic? Nope. Aldrich has participated in pageants celebrating the solstice, dabbled in a Brazilian form of voodoo, gone to Native American sweat lodges and taken a shamanic trance workshop at the nearby Omega Institute, a pricey New Age complex.

Could it have been the lord of the manor, 72-year-old Ricky Aldrich? He is multilingual, a free spirit, a practicing Episcopalian and a priest in the Universal Life Church to boot. Described by one old friend as “the greatest trickster who ever lived,” Aldrich has a “Rand Paul for President” bumper sticker on his truck and recently traveled to Cuba. Asked for his take on the Lubavitch Hasidim, Aldrich replied: “They’re creepy. I don’t like them one bit.”

It turns out it was Alexandra Mizrahi, Ricky Aldrich’s 40-something daughter, who put up the picture of the Chofetz Chaim. She converted to Judaism, and though she knows well the prohibition of speaking ill of others, she has written a blistering memoir about growing up in what is, to put it mildly, an eccentric household. Mizrahi is her married name, but the byline that graces the cover of her recently published memoir, “The Astor Orphan,” is Alexandra Aldrich.

The book tells the story of what it was like growing up on a grand estate as part of a family that spent so much on simply maintaining their dwelling that their finances basically amounted to a busted valise.

“I was embarrassed by my poverty,” she told the Forward during a recent tour of Rokeby. “I was humiliated because my cousins had more money. I was an aristocrat, but I was so impoverished that it really didn’t seem like I was. I didn’t really know who I was, so I thought I would find my identity in Poland.”

As a child, she had accompanied her mother on lengthy visits to Poland. After high school she took advantage of her mother’s Polish citizenship, which entitled her to a low-cost university education. During her second year in Warsaw, she strolled past the Nożyk Synagogue, the only prewar synagogue in Poland to survive the Nazi onslaught.

“I kept looking at it,” Mizrahi recalled. “I wanted to go in, but I didn’t feel like I had a right to go in.”

When she finally summoned the courage to knock on the door of the grand old synagogue, she was introduced to Michael Schudrich, an American rabbi in the employ of the Ronald S. Lauder Foundation. Schudrich, now chief rabbi of Poland, welcomed the 22-year-old American even though she was a gentile.

“I sort of fell in love with [Judaism] right away,” Mizrahi said. “The place was so beautiful, and the singing was so heartfelt.”

This happened in 1994, and soon the daughter of WASP royalty was studying Hebrew, the Torah portion of the week and traditional Jewish law.

Mizrahi returned to the United States to finish her undergraduate degree at Bard College, just up the road from Rokeby. She decided to delve into the mystical roots of Hasidism for her senior project, and moved to Brooklyn to work on the writing and research.

In Brooklyn she was introduced to an Orthodox rabbi named Meir Fund, a charismatic teacher of Jewish mysticism who took her under his wing. Fund warned her not to jump into being an observant Jew too deep and too fast, “because you’ll feel overwhelmed.” But pretty soon she was wearing ankle-length skirts, saying Baruch HaShem and acting, she said, “very Boro Park.”

The Israeli-born man she married in 1998 came from an Orthodox family but was not particularly observant. When his parents came from Israel for the wedding, they had a fight and left Rokeby before the couple was joined in wedded bliss. This may have been an omen.

There was a live band and fireworks at the wedding to entertain a crowd of 100, which included busloads of Orthodox Jews from New York City. In an effort to comply with Orthodox standards of modesty, Aldrich’s cousins wore hats. But they also wore dresses that had short sleeves. “Don’t touch the Jews!” Ania Aldrich advised them.

“The whole marriage was like a National Geographic article coming to me,” Ricky Aldrich quipped.

The marriage didn’t last. In 2005, Mizrahi retreated to Rokeby with her son, Shlomo. Despite the painful memories of her Rokeby childhood, the place turned out to be a refuge. She and the child stayed in the mansion for six years, while a custody battle dragged on. During that time, Mizrahi wrote “The Astor Orphan.” In 2011, after winning the custody battle, she moved back to Brooklyn. Shlomo is currently enrolled at a Lubavitcher yeshiva. But he still has a bedroom in the mansion, where the portrait of the Chofetz Chaim hangs.

Though pseudonyms are used in Mizrahi’s memoir, her mother and father signed affidavits for HarperCollins, attesting to the book’s veracity.

“My family lives in an illusion that nobody knows who they are, so I just did it to appease them and I thought that they wouldn’t get as mad,” Mizrahi said.

A lot of good that did.

Mizrahi says that one cousin is furious that the Rokeby name was used in the book, and some members of the extended family are horrified that images of the mansion are all over the Internet. Mizrahi was so anxious about running into her uncle, Winthrop Aldrich, on a recent Sunday afternoon that she snuck in a back entrance while “Uncle Wintie” painted inside the house near the front entrance. The two have not actually spoken since the book was excerpted in Town & Country magazine, but Mizrahi was convinced that her uncle was extremely displeased.

She quickly proceeded upstairs to point out steamer trunks full of her great-grandmother’s undergarments, antique rocking horses and bookcases filled with musty old volumes, many in French. After a tiptoed tour of the ground-floor rooms, Mizrahi settled down in the kitchen with her mother and father.

Ania Aldrich is an accomplished artist with cobalt-blue eyebrows. She has worked as a weaver, a doll maker and a painter of ceramic dinner plates. One plate depicts her reaction to Mizrahi’s religious conversion. It shows two women drinking tea; one of them is in a chair, but the other is flying up out of her seat.

Secular Jewish parents who have grappled with their offspring becoming observant can probably relate to the frustration of a gentile mother whose only child has become a Hasid.

Asked about her portrayal during Mizrahi’s childhood in the book, Aldrich said: “I was working so hard. I worried about everything, and I was constantly trying to make it better without any money, without my husband’s support.” Then she added, with a chuckle: “I love the picture of me as a skinny-dipping bohemian, not caring. It’s such a wonderful persona. I feel like, wow, I was really cool. If they make a movie [of the book], that’s what I want to be. I don’t want to be [the woman who was] always worried and cooking borscht, making things from my garden and foraging.”

But she says she’s still proud of her daughter.

For her part, Mizrahi says she is looking for a new husband and working on her next book, which might take the form of a memoir or a novel. It will chronicle her entrance into the world of observant Judaism.