At 92, Mike Greenstein Is Still One of the World’s Strongest Jews 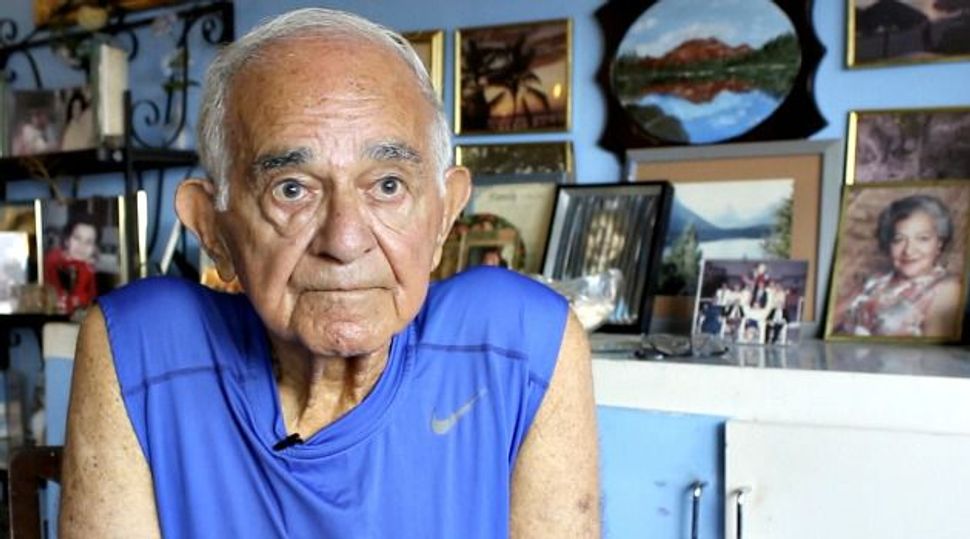 Like Strongman, Like Son: In the tradition of his father, Mike Greenstein says he can lift close to 600 pounds. Image by yermi brenner

Seated on the balcony of his apartment in the Far Rockaway section of Queens with a spectacular view of the Atlantic Ocean, Mike Greenstein, 92, is matter-of-fact about his Superman powers. Just recently, he participated in this year’s Olde Time Coney Island Strongman Spectacular, pulling a truck with a chain clenched between his teeth.

“It’s not trickery,” he said. “I don’t believe in trickery. The teeth are not doing the work, the jaw is. And it is mind control. Strangely enough, I sometimes have trouble walking and I use a cane. But when I’m performing I brush aside the ‘I can’ts’ and think, ‘I can! I can!’”

Greenstein invited me into his studio apartment, which was covered with posters, photos and copies of old magazine articles, many yellowing and faded, featuring himself and his iconic strongmen family — his brothers, sister and especially the star of the mishpokhe: his late father, Joseph L. Greenstein, known as “The Mighty Atom.” He was a wiry-looking man sporting a beard, wild hair and a mischievous twinkle. A small Star of David was sewn onto his leotard in which he performed.

“Though I never experienced any anti-Semitism, my father did,” Greenstein said. “Not among the other entertainers or the audience, who really didn’t care one way or the other, but the producers who hired the performers in the ’30s had some reservations about hiring a Jew. My father had to work in Yiddish vaudeville first, to prove that he could do the act and attract an audience. Then he was brought on for American shows. He never forgot that, and he was proud of being Jewish. I always wore a Star of David on my costume, too, because my father did.”

Greenstein’s Polish-born father was a sickly child and trained with a circus strongman to boost his health. No one thought he’d survive at all, but within short order he was touring with the circus and had mastered the strongman’s skills, Greenstein recalled. Later, when The Mighty Atom immigrated to Galveston, Texas, where he worked in the oil fields — and where Mike Greenstein was born — he wrestled professionally in his spare time.

As the younger Greenstein tells it, his father’s transition to full time show-biz strongman came right out of a Hollywood script. Asked to help change a car tire, he simply lifted the automobile with his bare hands — two passengers remaining in the back seat — and changed the tire. One of the passengers was none other than Harry Houdini, and the floored driver was his manager who, in turn, helped launch The Mighty Atom’s career in New York.

Among other skills, Joe Greenstein could supposedly prevent an airplane from taking off — as it taxied down the runway at 150 miles an hour — with chains attached to his hair. His son says he is capable of that one, too, along with a record-breaking dumb bell number in which his father lifted close to 600 pounds above his head.

“The Christian community was more comfortable with us because they valued physical prowess,” he said as the telephone rang. Greenstein excused himself to pick up the call. “Hello…. That’s great…. I’ll call you back later. I have a lady from the Forward who is interviewing me. But that’s wonderful.” Hanging up, he said proudly, “My great-nephew just had his bris.”

Returning to view the memorabilia on the wall and scattered across the counter, he finds one of special interest: a group portrait of strongmen at the most recent old timers’ day. “This man is a Catholic, who studied with my father and loved him,” Greenstein said, pointing. “Do you see the Star of David? He never takes it off. It’s his way of honoring my father.”

At 92, Mike Greenstein Is Still One of the World’s Strongest Jews