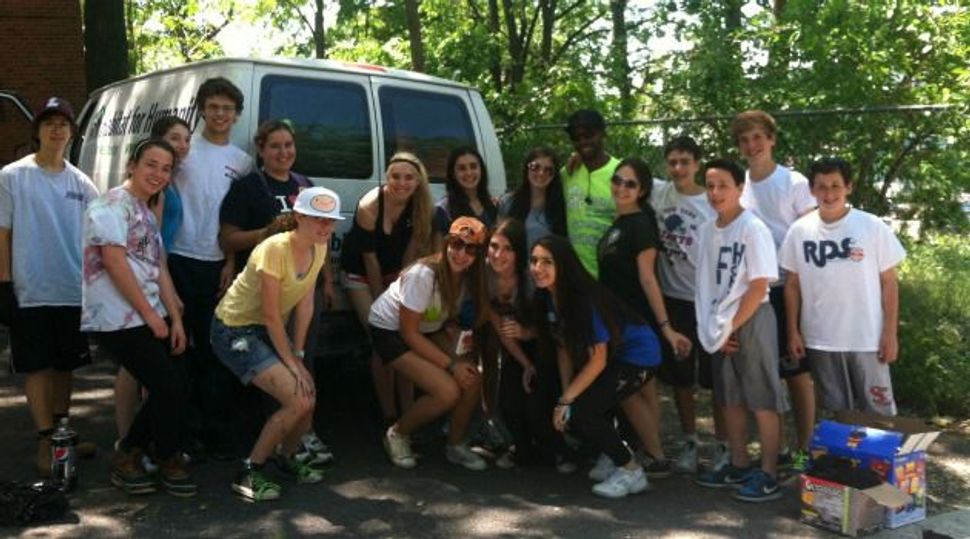 At Reform Temple Beth Shalom in Needham, Mass., high school students can go on weekend wilderness adventure trips in lieu of attending Hebrew school. At North Shore Congregation Israel, a Reform synagogue in the Chicago area, they can join a musical group where they jam together — and prepare to lead an alternative High Holy Day service. And at other synagogues across the country, teenagers use cooking or cultural exploration as an entryway into religious education.

Because Hebrew schools and confirmation classes must vie hard for the extracurricular time and energy of high school students, many synagogues are now offering something novel: choice. This August, students at religious schools across the country will receive glossy catalogs instead of plain old enrollment forms, with offerings designed to tempt them into staying in the fold.

And that’s no easy task. Bar and bat mitzvahs are often treated as a lavish culmination of a child’s Jewish education. Standing at the bimah, 13-year-olds pledge to pursue Jewish education, only to renege on the promise soon after. American high schools have grown busier and college applications more competitive. Add that to the perennial challenge of keeping teens interested in anything viewed as an obligation and one by one, kids stop showing up at the doors of synagogue on weekday afternoons, choosing soccer, working at the school paper and spending time with friends at high schools over analyzing Torah portions or learning Hebrew flash cards. This trajectory is the stereotypical one: Seemingly everyone but the die-hard future cantors, rabbis and synagogue presidents peels away before confirmation, the Reform and Reconstructionist ceremony at which 16- and 17-year-olds “confirm” their commitment to the faith.

And that’s why today’s efforts to keep kids involved are very different from what was on offer a few decades ago, school directors acknowledge. “Like many synagogues across the country, ours has struggled to retain kids after the bar mitzvah,” says Rabbi Leora Frankel of Community Synagogue in Rye, N.Y., a Reform congregation. Frankel has helped her shul “radically” reinvent its offerings: “Historically the only options were the youth group and the regular high school classes,” she says.

North Shore Congregation Israel and Community Synagogue have conducted informal surveys of students and parents to figure out what’s working — and what’s not. “We gathered a group of lay leaders for a year together with clergy and teens to have conversations about what would engage them,” says Frankel. “A few major things came out of it, one of which was they wanted more diverse options. Kids have busy schedules — some needed seasonal or once-a-month commitments.”

“There’s no silver bullet,” says Roberta Goodman of North Shore Congregation Israel, who conducted a survey about youth engagement with the Chicago Association of Temple Educators. “We know that one size does not fit all. But when teens come, they want the time to be worthwhile. They want to be getting new skills as well as being engaged in Judaic learning.”

Leaders at religious schools realized that, just as they offer various ways for adult congregants to be involved — whether through volunteering in the community, helping at services or joining the Sisterhood — “now we think of multiple pathways for our teens to stay connected,” says Frankel.

Education directors want to work with kids’ schedules or ambitions — by offering them a chance to fill their schools’ community service requirements, say, or add impressive credentials to their college resumes. Alternatively, some want to give teens with overprogrammed schedules a chance to burn off steam.

“There’s so much stress in high school and these kids can be so overprogrammed. So we hope we can actually be a retreat from all that,” says Rabbi Jordana Schuster Battis of Needham’s Temple Beth Shalom, where the teen program is called “Sha’arim,” or “gates.” She tells the story of a mom who offered her daughter a break from her synagogue activity to alleviate the strain of a busy week but was rebuffed. Her daughter explained: “That’s where I go to escape from all this pressure.”

Crucial to this new model is a re-envisioning of confirmation, from a be-all, end-all event for Jewish teens to an option that can be paired with other programming.

“Teens have a choice of which gate they want to enter learning through, and confirmation is one of those choices,” explains Battis. Other options include wilderness programming in the form of hiking and whitewater rafting, or teaching in elementary school classrooms at the synagogue. The “medium” may change, she says, but the content — Jewish learning — is consistent.

Going out into communities and performing social action, once seen as supplementary to religious education, is now more frequently offered as a “track” in and of itself,

At the Community Synagogue in Rye, electives range from yoga and meditation to community service collaborative programs that include clowning, music and more that may seem “out there” to some. “We have taken teens seriously as Jewish adults,” says Frankel. “We’ve phased the options in — they represent a radical shift in our community. Last year was phase 1; we piloted some new programs. And it may be that some don’t take off, so we’ll try something else.”

Goodman notes that at North Shore Congregation Israel they also have multiple approaches, none of which, she emphasizes, are “siloed.” One is Selah, a group of singers and musicians who study “folk, rock and jazz” as well as liturgical music and lead their own Shabbat and High Holy Day services. Again, the either-or is key: Kids can choose to do Selah instead of or in addition to their grade-level classes. Another option is “mitzvah corps,” a group doing charitable work, and a third option is to help in the classrooms of younger students.

That mentorship option, which many schools have implemented, allows students to perform community service and also to feel like they have a valued role. “When you say to an eighth-grader, we need you, it’s pretty compelling — we’re saying ‘you have something to offer.’ Not to mention that when younger students see older ones staying in school, helping out and gaining stature and authority, they may see a future for themselves beyond the bar mitzvah.

Sarah Marian Seltzer is a writer in New York and a contributor to the Forward’s Sisterhood blog. Find her at www.sarahmseltzer.com